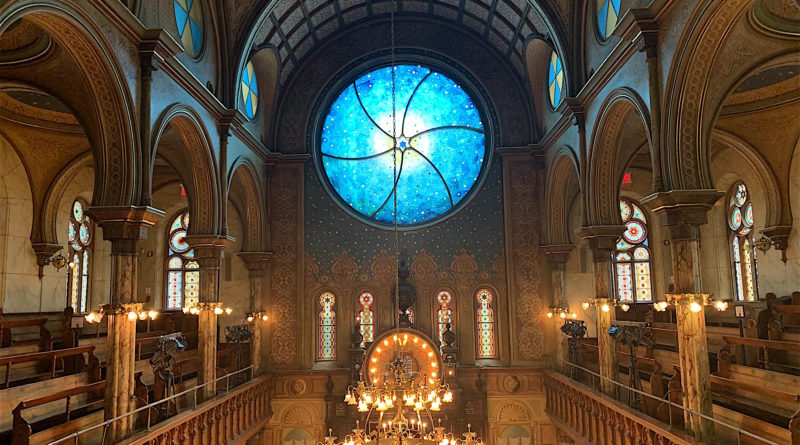 EPISODE 304 The Eldridge Street Synagogue is one of the most beautifully restored places in the United States, a testament to the value of preserving history when it seems all is lost to ruin.

Today the Museum at Eldridge Street maintains the synagogue, built in 1887 as one of the first houses of worship in the country for Eastern European orthodox Jews. The Moorish revival synagogue, adorned in symbolic decoration and sumptuous stained glass, reflected the Gilded Age opulence of the day while keeping true to the spirit of the Jewish faith.

But by the 1950s, most of the Lower East Side’s Jewish population had left for other districts, and the remaining congregation sealed off its beautiful sanctuary. For decades, it was hidden from all eyes, the ruinous space left to the ravages of deterioration. “Pigeons roosted in the balcony, benches were covered with dust, and stained glass windows had warped with time.”

PLUS: We discuss the birth of Jewish New York and how the city’s growth directly changed the way Jewish Americans worshiped in the 19th century. Did you know that evidence of New York’s very first Jewish congregation sits just a couple blocks from the foot of Eldridge Street?

A bonus after-show podcast for those who support us on Patreon.Greg and Tom continue their conversation about the story of Jewish New York and the Eldridge Street Synagogue.

1) Another historic synagogue of the Lower East Side — Beth Hamedrash Hagodol — has not the same fortunes as the Eldridge Street Synagogue.
2) Included in additional interview footage with Chelsea Dowling from the Museum at Eldridge Street.

A big thank you to Chelsea J. Dowell and the staff at the Museum at Eldridge Street for allowing us to record at the synagogue. For more information about special events and visiting hours, check out their website.

Beyond the Facade: A Synagogue, A Restoration, A Legacy: The Museum at Eldridge Street by Larry Bortniker, Roberta Brandes Gratz, et al.
Jewish New York: The Remarkable Story of a City and a People by multiple authors (Deborah Dash Moore, Jeffrey S. Gurock, Annie Polland, Howard B. Rock, Daniel Soyer, Diana L. Linden)
Landmark of the Spirit: The Eldridge Street Synagogue by Annie Polland
The Synagogues of the Lower East Side by Gerard R. Wolfe

If you’re interested in Jewish New York history or subjects related to the Lower East Side, check out these past episodes of the Bowery Boys podcast:

We are now a creator on Patreon, a patronage platform where you can support your favorite content creators.