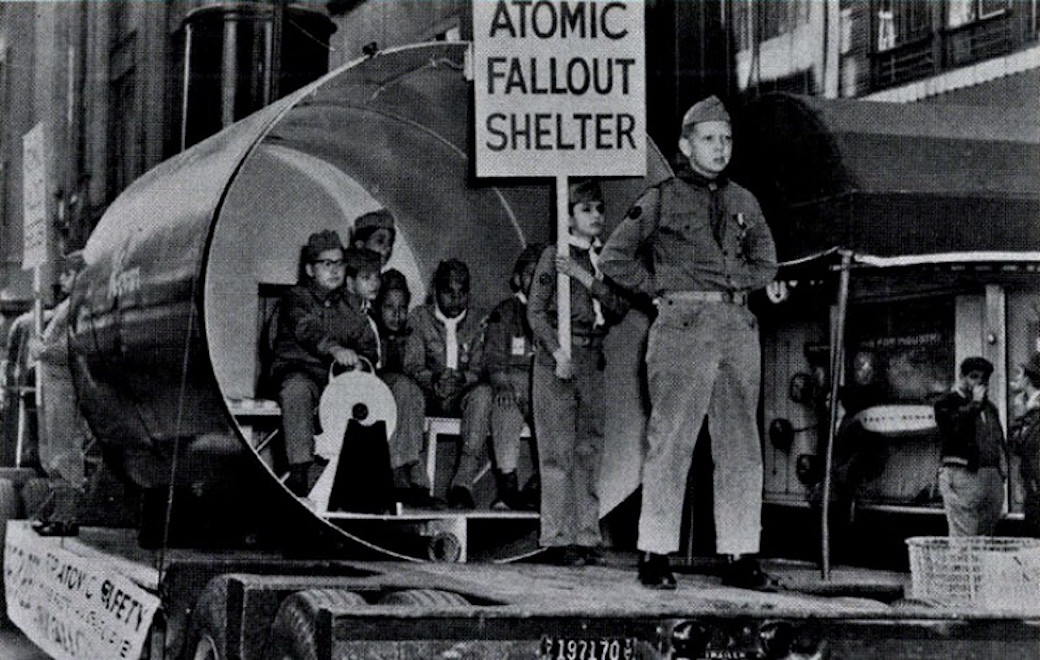 The early 1950s provided residents of New York with ample reasons for doom and gloom, thanks to fears of an atomic attack. America paid the price for using the bomb on Hiroshima and Nagasaki, helping to end World War II, by living with the anxiety of an atomic horror on its own shores for the next forty years. Not surprising, this was the decade that the destruction of New York City began graphically appearing in motion pictures in earnest. 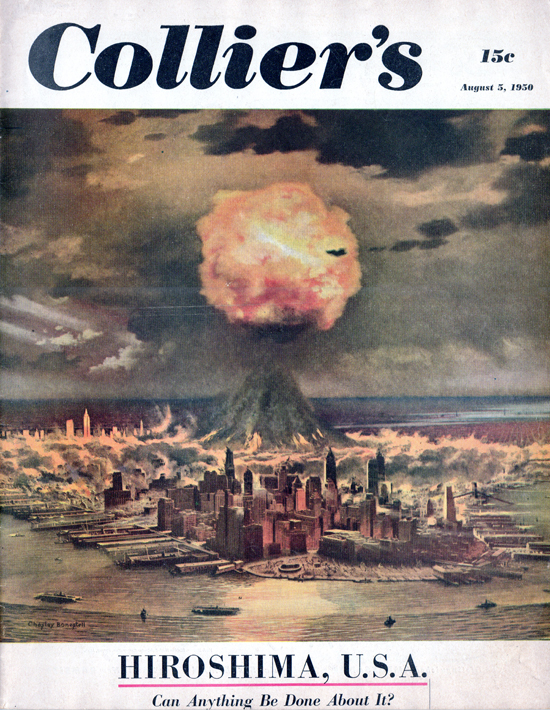 Although a great many films focused on the destruction of West Coast cities — the famous ‘A Day Called X‘ depicts the evacuation of Portland, Oregon — New York City also received its fair share of warning due to its size and prominence. Videos on survival and the construction of fall-out shelters, meanwhile, usually focused on the suburbs.

1. Civil Defense: NY Streets Cleared In Air Raid Drill
The citizens of New York City, a rather ‘prime target for an atomic attack’, prepare for an enemy ‘onslaught’ in an orderly fashion, at least according to this video. No panics, only ‘precision’.

2. Duck And Cover
The classic ‘duck and cover’ video was produced in 1951 using children from P.S. 152 (today the Gwendoline N. Alleyne School) in Woodside, Queens. Perhaps one of your parents stars in this video? The use of an animated turtle playfully hid the consequences of the bombardment of radiation and helpfully ignored how useless a maneuver like duck and cover would possibly be in such an attack. 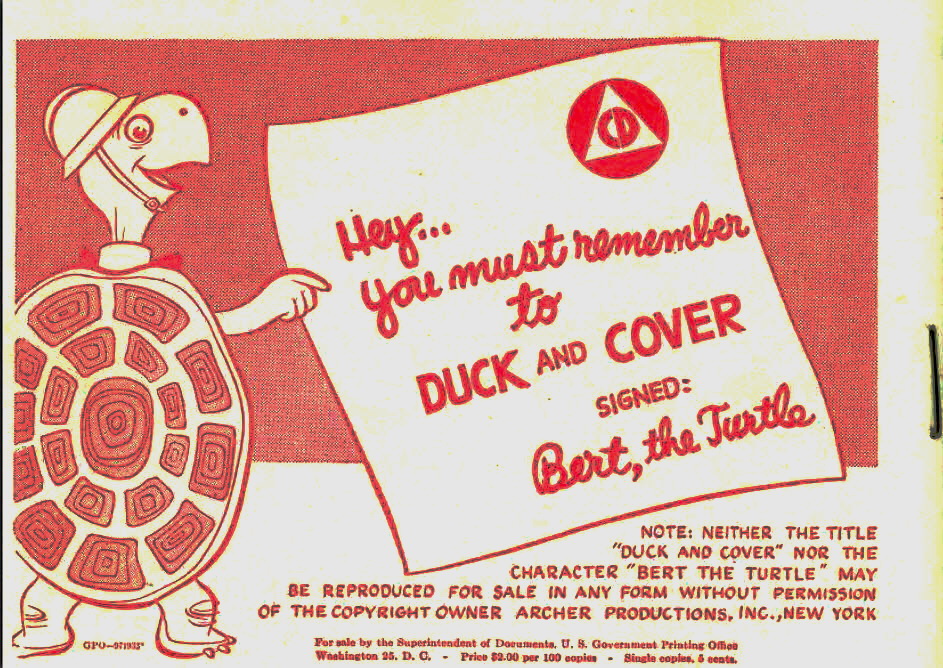 3. Air Raid!
From the WNYC-produced film The Price of Liberty in 1952, this well-directed video is structured like a suspense film. We’re in good hands, thanks to ‘brazen voiced shrieks’ and some film noir shadow effects.

This coolly produced film, released in October 1950,  featured William L. Laurence, science writer for the New York Times, in full scare mode. Although this one looks like it was filmed elsewhere (possibly Los Angeles), the animated sequence is clearly a city of the size and shape of New York. *sigh* This film came out less than a year before The Day The Earth Stood Still, embedding the ideas of non-fiction survivals into Hollywood dramas. 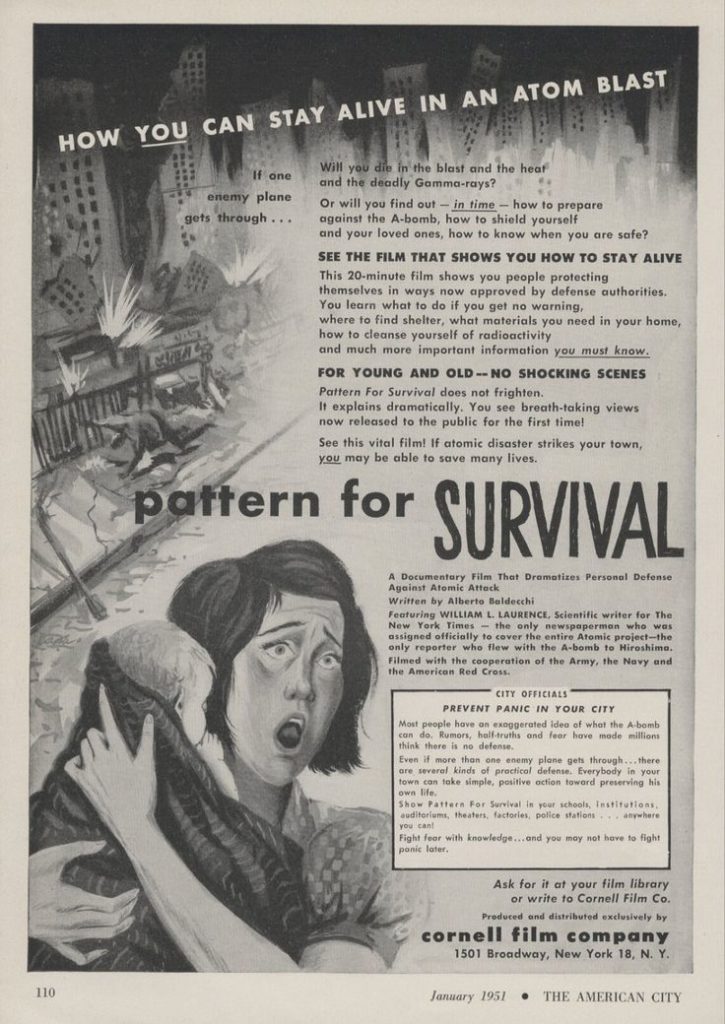 5. Atomic Attack
Then, if you have the stomach, there’s an entire 1953 50-minute film about a suburban family who — thankfully — live just outside of New York City to survive a devastating blast from a hydrogen bomb. From the company that now provides you with cell phones!

6 He May Be A Communist
Of course, the real threat are the communists in our midst. Luckily in this video, New York proves to be stridently anti-Communist. Look there’s a parade!

(A shorter version of this post originally ran OCTOBER 18, 2012)