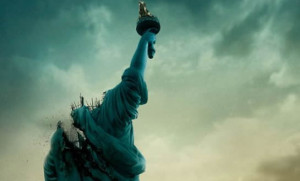 I apologize for the second post in a row about films, but I had to ask the question, when did destroying New York become hot again?

This Friday is the opening of I Am Legend, an adaptation of Richard Matheson’s classic thriller about the last non-zombiefied human being alive. In this case, he resides in New York City, the population wiped out by a virus. Nice to know that the last representative of the human race is charming, witty, and a former rapper.

If that’s not enough doomsday for you, JJ Abrams brings us Cloverfield next month, about a sea monster ‘the size of a skyscraper’ ravaging New York. I almost breathed a sigh of relief when I found out that M. Night Shyamalan’s The Happening releasing next spring, takes out Philadelphia. 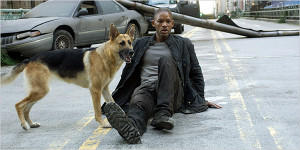 Tokyo may be the one with the most movie monsters attacking it in film history, but New York has taken it pretty hard from a variety of fictional sources. Here’s the top ten (I left out films that actually destroy the whole earth):

1. King Kong (1933)
Sure, they destroy more in a run-of-the-mill Fantastic Four or Spider-man movie these days than ole Kong does here, but the sheer novelty at the time of urban carnage was enough to petrify audiences. His attack on the elevated train is still terrifying. Thank God he merely climbs the Empire State Building. 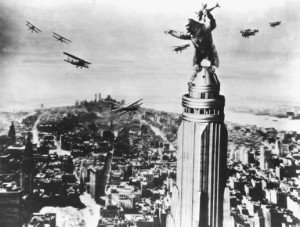 2. Beast From 20,000 Fathoms (1953)
Atomicly-woken prehistoric beastie with germ-infested blood plays tourist in Manhattan, eventually finding a suitable lodging at a roller-coaster in Coney Island. The movie is flat and plotless, but love that Ray Harryhousen stop-motion monster. If it wasn’t so destructive, the monster might be a little lovable. 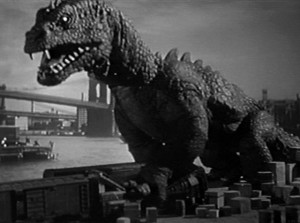 4. Escape From New York (1981)
John Carpenter takes a different approach to the Manhattan destruction theme — turning it into a gigantic prison — and along the way, makes a potent comment about New York in the late 70s. 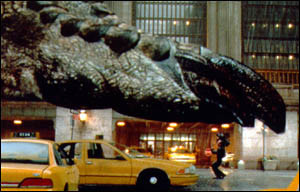 5. Ghostbusters (1984)
New York City has seen its share of monsters. From the skies, we’ve had Q: the Winged Serpent. From below, C.H.U.D. And in our elevators, those damned Gremlins! Even Godzilla‘s taken a snack by the Flatiron Building, years before the opening of the Shake Shack. But no big baddie comes closer to the hearts of New Yorkers than the sugary goodness of this sweet ectoplasmic ogre, successfully dispatched by Dan Ackroyd and Bill Murray.

6.Independence Day (1996)
Destroying New York City really came into its own cinematically in the 90s. The unease at seeing our fair city blown to smithereens by alien blasts is offset by the cries of joy of future architects and city planners at the alien’s first target — the Pan Am/Met Life building. It is sort of awful seeing Park Avenue South wiped away by flames. Some great restaurants, gone in a flash! 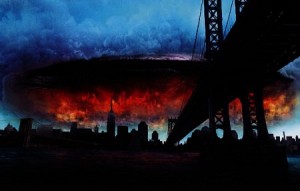 7. The Siege (1998)
Technically the only movie on the list that really ‘could’ happen, however the filmmakers glee is killing off mass groups of New Yorkers is just plain sadistic. The bombing of a Broadway theater — look, that rich woman is missing her arm! — is of particular poor taste. Maybe it would have been easier to swallow had the movie been actually, you know, good. 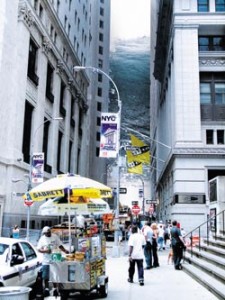 8. AI: Artificial Intelligence (2001)
Steven Spielberg creates some graceful carnage — waterfalls and flocks of birds among toppled buildings — and includes a vision of a destroyed Twin Towers in a rather unfortunate year of release. Don’t get too depressed however; his recollection of the city is hardly too accurate. One of the buildings is literally just a Apple computer subwoofer dressed up to look like a building.

9. Deep Impact (1998) and Day After Tomorrow(2004)
These two films are pretty abysmal, but the creative ways in which they treat New York City like children’s toys in the hands of natural catastrophe is at least notable. Heck, and even I’ll throw in the meteor madness of Armageddon (1998), which dares to take specific note to flatten the Chrysler Building along with everything else. And for the sheer cheese factor, I cant forget to mention the 1999 made for TV Aftershock: Earthquake in New York. 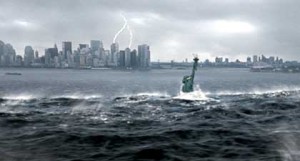 10. King Kong (2005)
In the rather campy remake from 1976, Kong tackles the World Trade Center. By the time Peter Jackson got around to remaking it, he’s back on top of the Empire State and wrecking a bit more havoc than his prior incarnation.

Honorable Mention: New Yorkers should be honored to know that in the Japanese monster classic Destroy All Monsters (1968) set in the future (aka 1999), New York City is in fact destroyed by Godzilla before he gets to Tokyo.

1 reply on “The History of (Destroying) New York City”

If you haven’t done so already, a film you should check-out is THE LOST MISSILE (1958)starring Robert Loggia. It’s about a missile from outside our galaxy that gets caught in Earth’s atmosphere and begins orbiting around us. Traveling at an enormous speed and generating enormous heat, it lays waste to everything in its path…with New York City hot on its itinerary. This film should complement the fine list you’ve compiled.