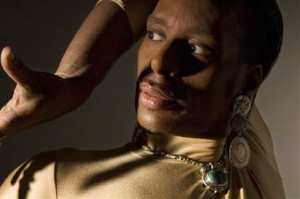 Above: the phenomenal Willi Ninja

BOWERY BOYS RECOMMEND is an occasional feature whereby we find an unusual movie or TV show that — whether by accident or design — uniquely captures an era of New York City better than any reference or history book. Other entrants in this particular film festival can be found HERE.

The Savoy Ballroom in Harlem saw the birth of the Swing-era ‘Lindy hop’ during the late 20s, a hip-swiveling dance named after Charles Lindburgh which became a regular move on dance floors. The Savoy would see a more radical mix of dance styles — and a decidedly more adventurous clientele — in the late 70s with the Harlem drag balls. The rest of the world was let in on this little secret in the cult classic 1990 documentary Paris Is Burning by Jennie Livingston.

‘Paris’ woke up many open-minded Americans — and rankled just about everybody else — to a community even further out of the spotlight than the ‘mainstream’ gay and lesbian community of that time. (Mainstream, of course, being relative in 1990.) Here were groups of primarily young black and Latino gay men and transgenders, with little evidence of stable home environment, enjoying the freedom of glamour and high fashion, elegance and performance on display on dancefloors in late 80s Harlem.

‘Paris Is Burning’ displayed the New York ‘house’ culture, groups of men under the aegis of various fashion houses — featured in the movie are the houses of LaBeija, Ninja and Xtravaganza — that serve practically as unofficial families. They meet on the dancefloor in competitions to emulate feminine and masculine stereotypes with just that extra added component of glamour. Fashion models, banji boys, military. Watching the competitions of ‘realness’ — the ability to pass ones self in the real world as ‘normal’ — has almost amusing relevance filmed as it was before the era of hyper-masculine gay appearances and culture of the ‘down low’. 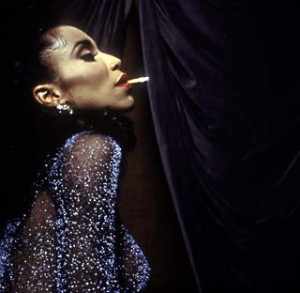 New York City looks drab next to the colorful and fabulous personalities. You can catch a glimpse of how the West Village piers once looked, but who’s paying attention when Venus Extravaganza is talking? She’s the most heartbreaking character — I won’t spoil why — and has always been my favorite; faced with insurmountable obstacles, you still root for her as she describes her fantasy life to be a kept housewife and a fashion model. Livingston cleverly intercuts with pictures of at-the-time current models, images which are even more strikingly absurd now. Venus might be happy to know she looks more like a model of today than any of those women.

Many of the greatest personalities in ‘Paris’ are no longer with us, giving the movie an even more depressing weight. However, one of the featured stars Octavia St. Laurent (pictured above) is still looking great — although she now calls herself Heavenly Angel Octavia St. Laurent. Like the Lindy hop, another dance borne from the floors of the Savoy, voguing, as infiltrated modern pop music, from Madonna to Britney Spears.

And some members of the houses have gone on to mainstream success. Willi Ninji, who passed away last year, became a recording artist and dance coach, notably to Paris Hilton. Another member of the house of Ninja, Benny Ninja, is a frequent guest on America’s Next Top Model.

And while the visibility of the Harlem ballroom danceoffs may have peeked with ‘Paris Is Burning’, they’re still going strong, particularly in other cities like Atlanta and Los Angeles. The House of Ultra-Omni recently celebrated their 25th anniversary. While the younger generation now ‘perform’ as modern stars like Jay Z, there’s still plenty of glamour and confidence to go around.

If you haven’t seen ‘Paris Is Burning’ in a few years, I highly recommend another viewing and maybe a little private voguing in your living room.

Below: The style of Kevin Ultra-Omni, at his house’s anniversary party

Above photo: Ann Johansson for The New York Times