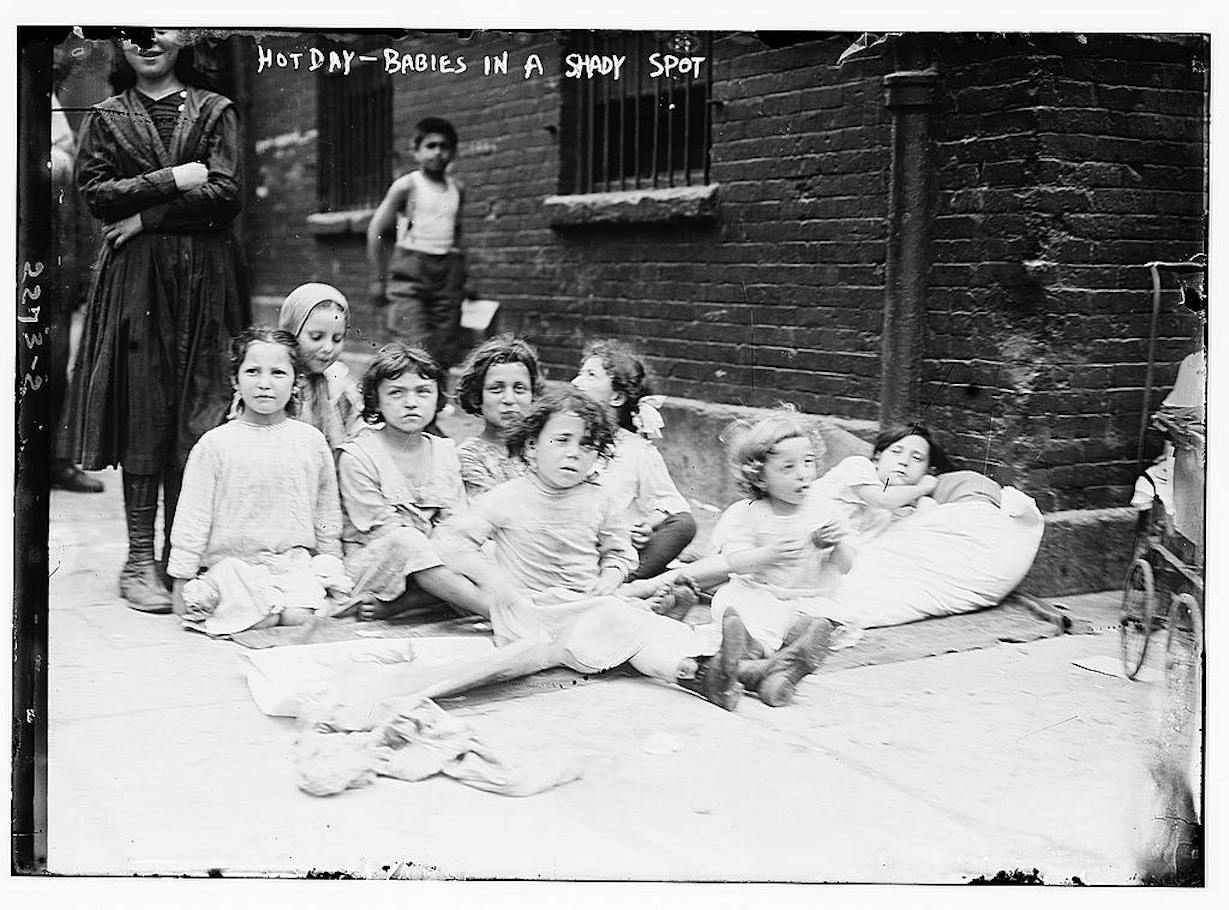 The city was in the midst of a devastating heatwave gripping in the entire Northeast during the first two weeks of July 1911. There was little escape from the scorching temperatures among the cramped tenements. New York’s beaches offered some respite, but you had to cram into a sweltering train cabin to get there. Rudimentary air conditioning had only been invented a few years before and was hardly widespread.

In New York, the thermometer never broke a 100 degrees like it did in Washington or Boston. But the humidity was deadly, and the city too crowded and ill-prepared for such withering conditions.

Below: A disturbing infographic from the Tribune

Naturally, the brand new subway was not the place to be either.  Riders going from the Brooklyn Bridge to Grand Central suffered a 45 minute ride, and a few passengers passed out.  But others underground found relief from the heat; workers drilling the Penn Railroad tunnels under the Hudson River reported luxuriously cool temperatures in the 60s.

Below: Dozens slept underneath the shady trees in Battery Park at the hottest point of the heat wave. 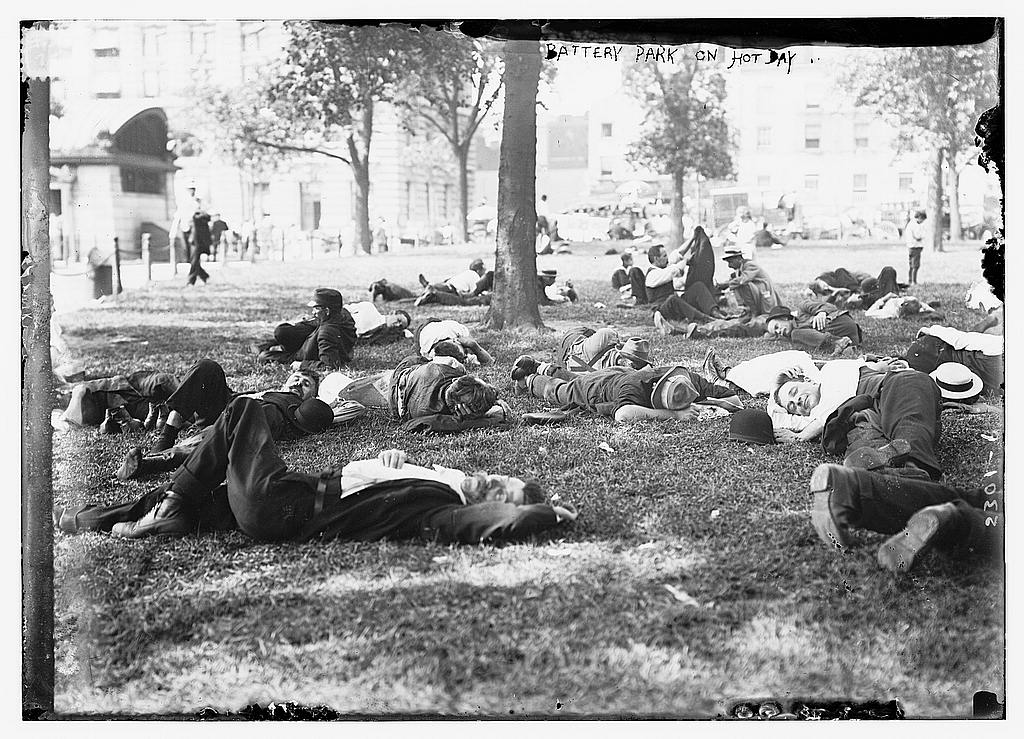 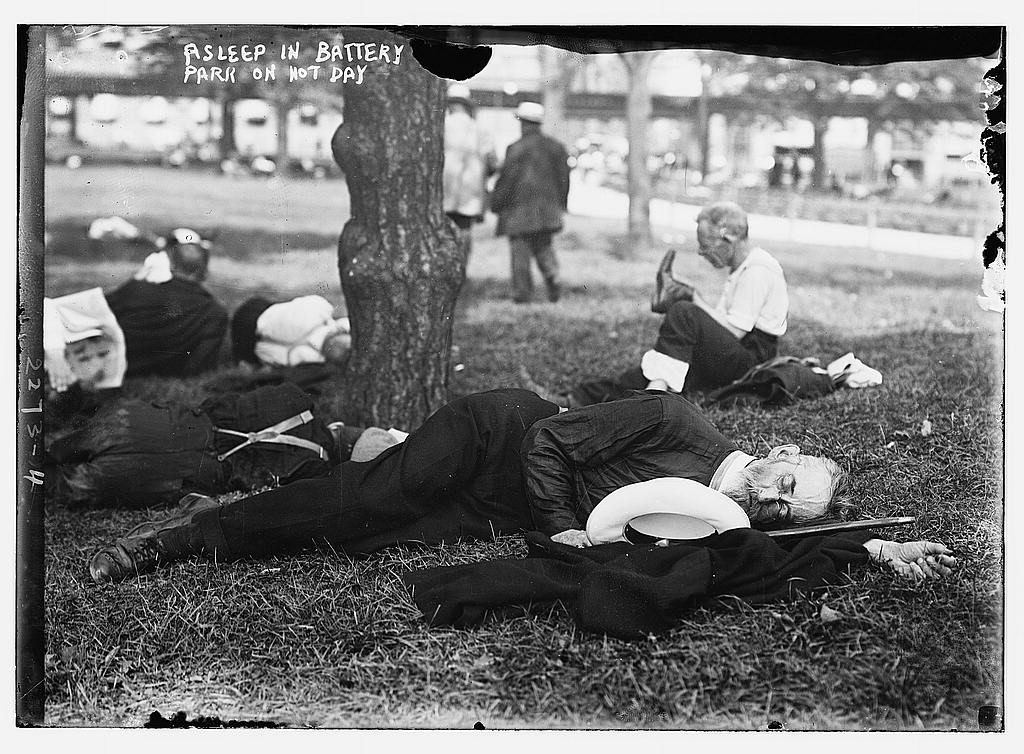 The sizzling conditions literally drove people insane.  One drunken fool, “partly crazed by the heat,” attacked a policeman with a meat clever.  A child on Tenth Avenue, escaping to the rooftop for relief, tumbled down an air shaft.  The hospital was filled to capacity. Staten Island’s fire commissioner succumbed to the heat and died in his home.

Some levity as a boy takes off his cap to cool off in a park fountain:

After July 7th, the temperatures dipped to normal levels but the humidity kept the city in sweaty discomfort. Or as the Tribune dramatically states:  “The monstrous devil that had pressed New York under his burning thumb for five days could not go without one last curse, and when the temperature dropped called humidity to its aid.”

By the time rain came to relieve the city, a reported 211 people had fallen to heat-related deaths. But the largest number of victims came from New York’s army of horses, trudging by the thousands through the city’s busy, stagnant streets.  The New York Times estimates that over 600 animals died during the heat wave, so many that the city was unable to pick up all the bodies from the streets.  Frequently seen were dead animals pushed to the sides of the road.  Add in the oppressive humidity, and I’ll leave you to imagine how horrific it would have been to experience.

Under better care were the deer of Central Park. (Yes, Central Park once had deer wandering around.) When two deer collapsed of sunstroke, the animals were taken inside and given brandy to drink.

Below: Not all horses suffered that July. Henry Burgh’s American Society for the Prevention of Cruelty to Animals was out in force with water buckets. Picture courtesy NYPL 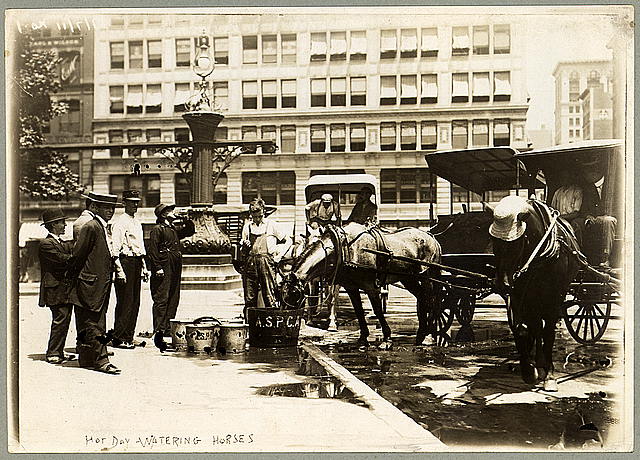