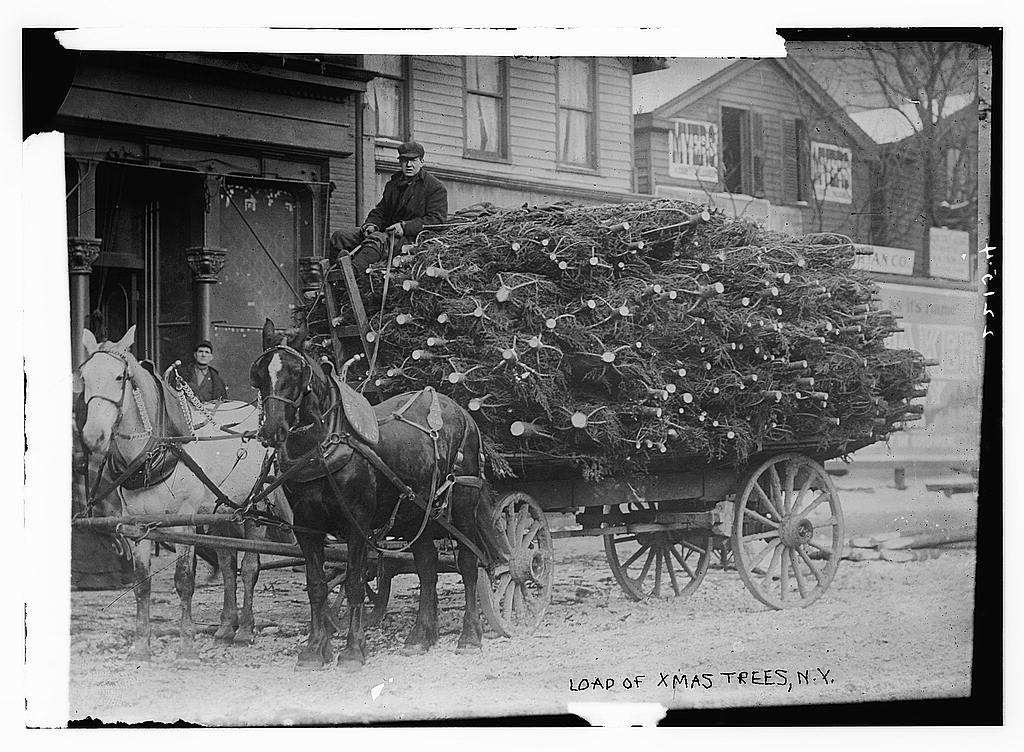 For many, the Christmas holiday in New York City finally comes to life when the sidewalks sprout evergreens. The sight and smell of curbside Christmas tree sellers ushers in the season in the most pleasing way. (Pleasing for the passerby; on a rather cold day, I can’t imagine it too pleasing for the seller.)

As history has it, the presence of streetside Christmas trees in the city actually predates Christmas as a national holiday (1870).

In the mid-19th century, hardly any modern Christmas traditions existed. One that did was the Christmas tree, a pre-Christian ritual incorporated into holiday festivities in German-speaking European countries (Those traditional settlers, the Puritans, didn’t much care for Christmas at all.)

Although the tradition did exist in the United States thanks to the Dutch, it was German immigrants who popularized it. As a huge surge in German immigration began in the 1840s, it’s not surprising that New York’s first Christmas tree market — in fact, the first mass-market sale of Christmas trees in the United States — came along shortly after, in 1851.

It doesn’t appear that ‘jolly woodsman‘ Mark Carr, living in the lush Catskill Mountains, even celebrated Christmas, but he certainly heard tales of families driving outside of town and chopping down evergreen trees to drag into the city. The go-out-and-get-it-yourself approach probably only benefited the wealthy or anybody with a horse and wagon and the time and energy to travel into the forest and find one. Carr, finding the spirit of the holidays (capitalism) deep within him, thought he’d bring the forest to the city folks.

So a couple weeks before Christmas in 1851 — things didn’t start so early back then — Carr and his sons chopped down a couple dozen fir and spruce trees, shoved them into two ox sleds, carted them over to Manhattan on a ferry and set up shop in the Washington Market paying one dollar for the privilege of taking up a sidewalk at Washington Market with his rather ungainly merchandise.

Holiday revelers were thrilled to be spared the journey out of town, and Carr’s entire stock of evergreens sold out within the day. No surprise this financial opportunity was mimicked by other farmers the next year, and within a few years, the open-air Christmas tree market was born.

Below: A Christmas tree seller on Catherine Street, 1941, photo by Beecher Ogden

Carr, of course, became the Vanderbilt of the Christmas tree, raking in the dough year after year, selling trees for decades. Carr’s sons were still selling trees in the city as late as 1898, in a city quite transformed, or as the old House Beautiful magazine put it, “Mark Carr’s little sidewalk stand now rents for several hundred times what he paid for it.”

His innovation may be responsible for a whole host of domestic decoration, delivered fresh to the customer. “It is safe to say that 200,000 Christmas trees will be on the market here this year,” said the New York Times in 1880, “besides many tons of Christmas greens.”

Below: Christmas tree sales at Barclay Street, near the site of today’s World Trade Center 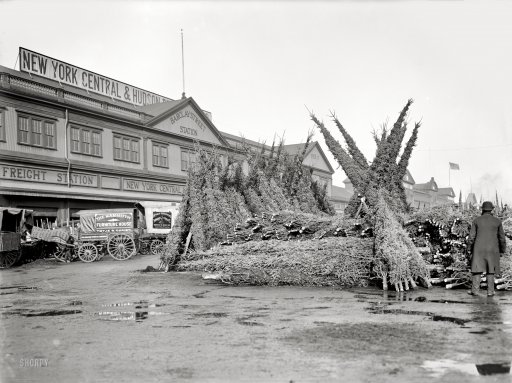 By the 1870s boatloads of evergreen trees from Maine were pulling into New York. The task of moving a forest into crowded Manhattan required additional greased palms.

From an 1878 New York Tribune article: “A preliminary trip to the city is … necessary to engage a position on the street or dock, and the rent for this varies from $10 to $75. Then comes the night-watchman and tips (it is whispered) to harbor-masters and police sergeants, so that a dealer who invests $1,000 often realizes little for his labor which extends through three solid months.”

For decades, well into the 20th century, it was easiest to get the trees near the waterfront.  “West Street is now the Christmas tree market in the city,” said the Times in 1908. “Not only is the city’s entire demand supplied practically from this one market, but thousands of Christmas trees are shipped by the West Street dealers to all the surrounding towns and cities in New York State, New Jersey and even to points much further away.” 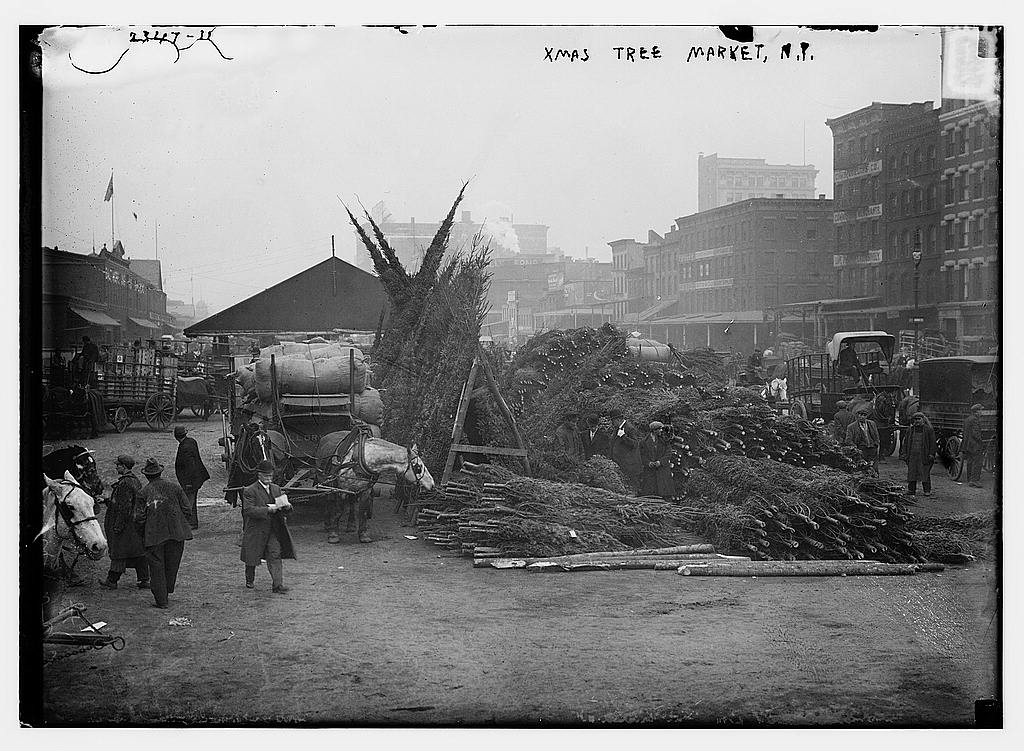 West Street was still the central location of prime Christmas tree sales by the 1930s, but sellers were increasingly bringing their wares onto city streets. Tree markets were a regular seasonal site by the 1950s, with the deterioration of the New York waterfront.

What has drastically changed is the time of year that trees have become available.  “Prospective buyers … feigned surprise at seeing Christmas trees this time of year,” claimed an article published on December 19, 1951. “Most householders, it is well known to Christmas tree retailers, put off buying a tree in the hope that frantic merchants will have to unload at a low price just before Christmas when the market is glutted.”

Note: This is an expanded version of an article which originally ran on this blog in 2009.