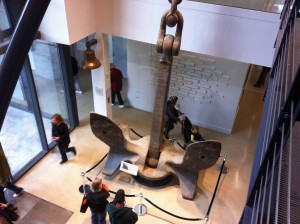 Anchors Aweigh: A museum finally opens in one of Brooklyn’s most restricted outposts

The environmentally-friendly new center is affixed to the 1858 Marine Commandantâ€™s residence in one of the city’s better old-new hybrids, and visitors are constantly and playfully reminded of the building’s forward-thinking approach. (Bathrooms supplied with rainwater!) But it’s the history of the Navy Yard — within the context of Brooklyn’s own history — that’s the main attraction here.

The first floor provides an exhaustive but well-spun timeline, weaving the Navy Yard’s beginnings into the context of America’s own naval history. On opening weekend, there was a sailor and a Rosie the Riveter-type on hand, and even they seemed delighted to play around with the interactive consoles. The second floor further describes the day-to-day workings, with kooky artifacts (old whiskey bottles!) and curious trivia (the Yard was once overrun with cats!) mounted to the walls.

On the third floor is a display on the Navy Yard in wartime, its closure in the 1960s and its transformation into an enclosed industrial park. While I hardly found its first-floor displays of modern products produced at the Yard to be awe inspiring, it’s balanced by a moving, even disquieting display of photography on the third floor. The show ‘War Photographers’, is in memory of Tim Hetherington, the photojournalist (and co-director of the film Restrepo) killed in Libya several months ago. Both he and the gallery’s curator Christopher Anderson have a unique connection to the Navy Yards that reinforces this once mysterious place as a vital part of the city today.

Given that admission is free (I believe for the next few weeks, but possibly longer, check their website for more info), this is pretty much a must-see for history buffs and a seamless blend of displays for adults and children. Imagine what this kind of ingenuity could do for the nearby Admirals Row?! 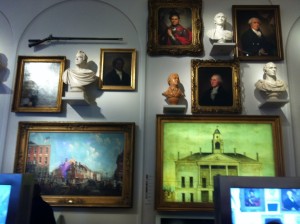 If any place needed a thorough renovation, it was the New York Historical Society. The museum, one of the city’s longest enduring cultural institutions, contains New York’s greatest treasures. Until recently, however, it’s been a tad unpleasant to enjoy many of them.

Not that the Historical Society hasn’t put on spectacular exhibits and lectures in the past. For instance, I consider Alexander Hamilton show from 2004 one of my inspirations for creating this podcast and blog in the first place. But the exhibit spaces were often stuffy with a lack of open space, with oversized exhibits twisting down corridors. The museum’s prized artifacts were often hard to find or dimly presented.

The lavish new first-floor renovation dispenses with any further obscurity. Here in plain day are all the greatest hits of the museum, boldly presented on the wall or within nooks under foot. In fact, one modern treasure — Keith Haring’s whimsical ceiling from the Pop Shop — hangs above the ticket booth. To find this just several feet from Gouverneur Morris’s wooden leg and the dueling guns of Hamilton and Aaron Burr makes for a grand and  innovative statement.

Finally, the NYHS makes a hard turn for the modern. The Robert H. Smith Auditorium now shows ‘New York Story’, whisking through New York history with lighting effects, constantly moving screens and a projection of almost IMAX-like proportions. (I was genuinely surprised we didn’t get those 4-D effects like rain mist and soap bubbles, but then that would ruin the fancy new auditorium seating.)

A new ‘sculpture court’ showcases a spectacular rarity (a Revolutionary-War era Torah) while the children’s museum downstairs has been heavily revised and seems a genuinely fun experience. A scarlet-hued first-floor gallery presents the NYHS’s greatest paintings more accessibly than before.  Upstairs are three new exhibitions, and of course, still on the fourth is the quirky, oddly charming Henry Luce III Center for the Study of American Culture, essentially the most meticulously arranged attic in the city.

For more information visit their website: New York Historical Society. The museum is open until 8pm on Friday nights and now you can dine at a Stephen Starr restaurant there, Caffe Storico.