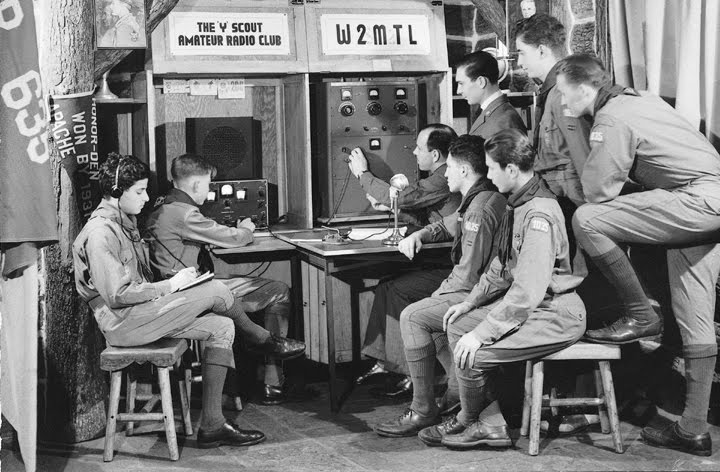 Amateur radio operators at the 92nd Street Y on the Upper East Side, 1940. Courtesy the Milstein Archives

EPISODE 137 The discovery of radio changed the world, and New York City was often front and center for its creation and development as America’s prime entertainment source during the 1930s and 40s. In this show, we take you on a 50-year journey, from Marconi’s newsmaking tests aboard a yacht in New York Harbor to remarkable experiments atop the Empire State Building.

Two of the medium’s great innovators grew up on the streets of New York, one a fearless inventor born in the neighborhood of Chelsea, the other an immigrant’s son from the Lower East Side who grew up to run America’s first radio broadcasting company (RCA). Another pioneer with a more complicated history made the first broadcasts that featured the human voice, the ‘angelic’ tones of a Swedish soprano heard by a wireless operator at the Brooklyn Navy Yard.

The second half of our show features the creation of the great radio networks and many local New York stations that are still around today. What indispensable station got its start as a department-store radio channel? What borough was touted in the very first radio advertisement? What former Ziegfeld Follies star strapped on a bonnet to become Baby Snooks? At right: the logo for the NBC Red Network

Featuring tales of the Titanic, the rogue adventures of amateur operators, and a truly scary invasion from outer space!


Harold Bride, the only surviving wireless operator from the Titanic, is escorted off the rescue vessel Carpathia.

Lee de Forest, one of the first inventors in New York to practice with broadcasting human voices. He eventually set up an experimental station in the Bronx. (NYPL)

The rather cozy studios of WJZ, date unknown. WJZ, originally a Newark station (notice the JZ for Jersey), moved to New York by the mid-1920s and became the anchor station for the NBC Blue network.

Stars of the Eveready Hour, broadcast on WEAF, featuring Will Rogers and the Waldorf-Astoria Orchestra. (Courtesy PDX Retro)

David Sarnoff at the World’s Fair in 1939 out in Flushing Meadows. (NYPL)

Songstress Jessica Dragonette, one of the most successful stars of the NBC stable during the 1930s, and one of many stars who struggle to find fame once television came along.

The lobby of 30 Rockefeller Plaza, the home of studios for the National Broadcasting Company. Photo by the Wurts Brothers

The complete broadcast of ‘War of the Worlds’, broadcast by the Mercury Theater on the Air from the CBS Studios at 485 Madison Avenue.