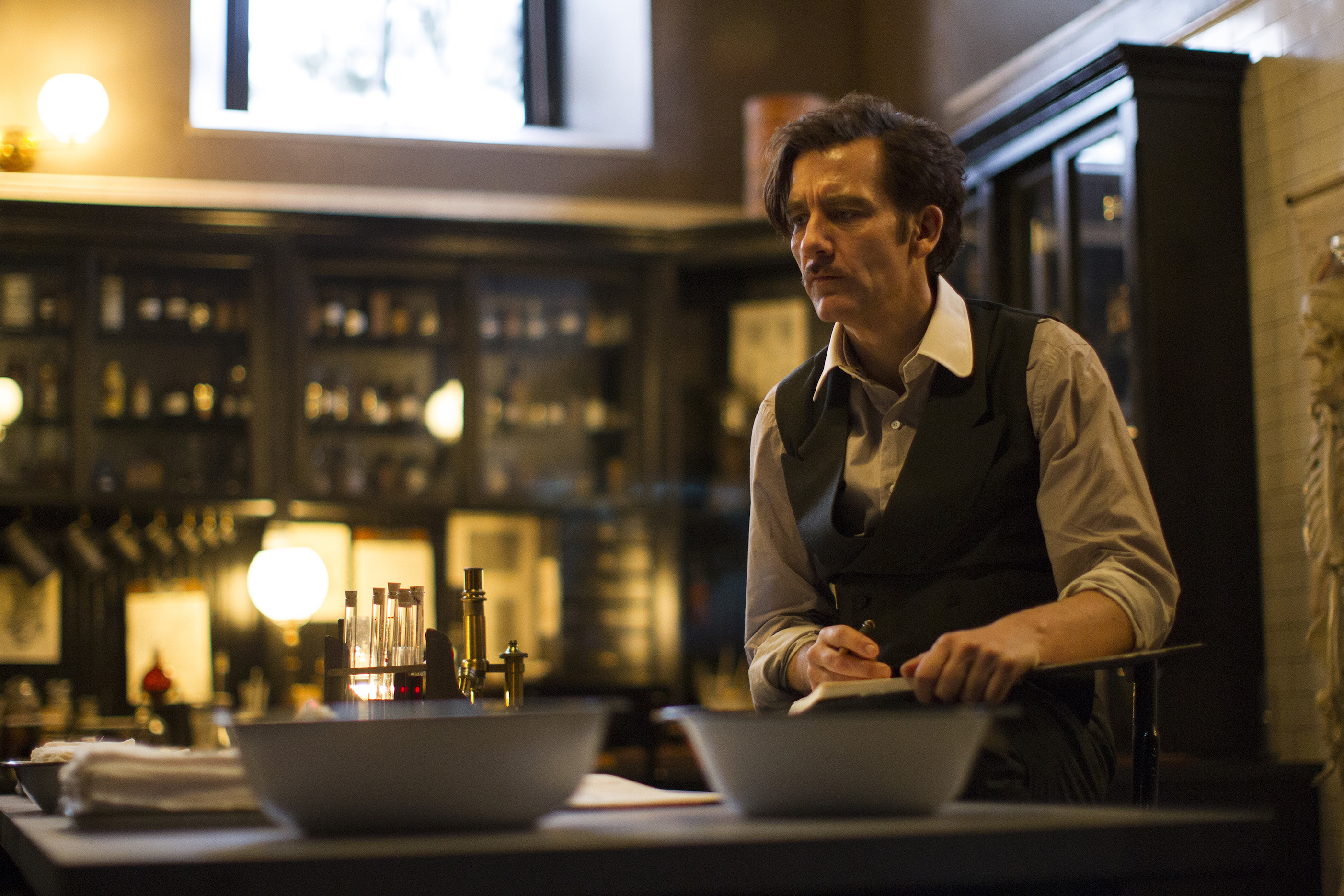 Pictured above: Dr. John Thackery (Clive Owen) explore several experimental procedures in the second season of The Knick, some more successful than others.

This post contains light spoilers of general themes from this season of The Knick although there are no specific plot twists discussed. You can use this as a primer for the second season before you begin, or review this list of historical moments before watching this evening’s finale.

Cinemax’s period hospital drama The Knick, now finishing its second season, spends a serious amount of time hunched over an operating table. The able and ambitious surgeons of Knickerbocker Hospital cut open flesh, severed body parts, injected experimental serums and performed delicate incisions on brains, faces, throats and abdomens.  The special effects teams should be applauded for making me want to throw up on at least five occasions this year.

But The Knick is more than a procedural about a turn-of-the-century hospital although those watching for medical drama (or horror) will come away satisfied.  With Season Two (set in 1901) this hospital drama rose to become a detective story about New York City itself. In Season One historic figures populated a story about a growing hospital. In Season Two the show finally found its footing within the messy patchwork of the Gilded Age.

Below are some historical highlights from the season, taken from some of my Tweets from the show’s original broadcast over the past several weeks.  There are no plot spoilers here — in fact, I’ve chosen to not even mention any characters’ names — and some of you might even find this helpful before you watch.

New Yorkers raced to find faster, more efficient solutions to horse-drawn vehicles. In the early years of automotive conveyance, it appeared the electric variety would lead the charge; however the earliest models were expensive and entirely inefficient. Meanwhile oil refiners like the ones in Lima, Ohio, concerned that Edison’s electric light bulb was killing the kerosene market, began looking for other uses for their product.

There were several electric charging stations throughout city (like filling stations) such as this one: #TheKnick pic.twitter.com/1h9e9yIbiD

The failure of electric cars — and rise of petroleum run vehicles — helped save the fate of Lima, Ohio. #TheKnick pic.twitter.com/yljO6YrmVL

Apartment living was all the rage with the upper middle class in the 1880s, and developers around Central Park monopolized on the craze with lavish apartment complexes, bringing the amenities of upper crust life to those who couldn’t afford the upkeep of a mansion. In particular, the Upper West Side was rapidly developed, becoming one of New York’s trendiest residential neighborhoods by 1900.

The "bottom of Central Park" had impressive selection of apartment buildings in 1900s like Navarro Flats: #TheKnick pic.twitter.com/4igeGcw0QK

FEARS OF THE NEW SUBWAY

The ground was broken on New York’s ambitious new subway system on March 25th, 1900, but not everybody considered it progress. Miles of underground tunnel required unprecedented investment which tore into busy streets, creating nuisance and danger.  Those of the more sheltered class flinched at the idea of immigrant workers ripping into their streets. Most New Yorkers were certainly unsettled at the sound of dynamite explosions and feared that whole city blocks might blow up.

The original course of the first New York subway. Ground was already broken in 1900, completed in 1904. #TheKnick pic.twitter.com/XCXlU1qFXy

Medical practice and scientific thought were expanding in the 1900s, but new modes of treating complicated conditions like drug and alcohol addiction were having a difficult time in the morality based institutions of the day.  Most physicians still believed that addictions exposed flaws of the human character and had little connection to the processes of the brain.

Few doctors saw it as a disease. Here's one New York doctor from 1917, diagnosing it as disease: #TheKnick pic.twitter.com/3dofBFSXow

Deteriorated or stunted moral character was also seen as endemic of new arriving immigrants especially those from southern Italy.  The study of eugenics — belief in the improvement of the human race through selective reproduction — rapidly grow in colleges and universities in the 1900s. Naturally the eugenics argument was also used against African-Americans and wielded as a threat against any who attempted to upend the status quo.

Eugenics was growing quite popular in American universities and politics in 1901. #TheKnick pic.twitter.com/HMB9OAUt0n

Sterilization laws influenced by eugenics would become quite popular in the United States by the 1920s: #TheKnick pic.twitter.com/cCr1eyqN0C

Although the scandals of Boss Tweed were almost 30 years old by 1901, Tammany Hall still held a viper’s grasp upon New York City infrastructure — from the ports to the construction projects.  A standard building project would often require many layers of ‘greased palms’, and expensive materials were often used because a corrupt middle-man could hide more layers of kickbacks there.

"Skimming of the top" and padding costs was how Gilded Age New York City was built! (pic @MuseumofCityNY) #TheKnick pic.twitter.com/MZOitnazzW

THE WORLD OF DRUGS

While the dangerous qualities of many common drugs were well known, few were actually banned in 1901. Cocaine and heroin were still used in the operating room, and even substances we consider deadly poisons today were available over the counter.

Heroin, like cocaine, was legal in 1901. Bayer, who made aspirin, held the US trademark for heroin. #TheKnick pic.twitter.com/EtjIfrMfQe

Take some quinine! For variety of ailments. First discovered in South America as bark of 'fever tree'. #TheKnick pic.twitter.com/PWfOzH9NxX

Cannibis — by the bottle! It was legal in the US until the 1920s: #TheKnick pic.twitter.com/LYxYq5Ixfg

Ox-gall was used for medicinal purposes back then but is better known today in engraving and painting. #TheKnick pic.twitter.com/vKY4hmW0iY

THE REALITIES OF ‘THE FREAK SHOW’

Inspired by P.T. Barnum’s American Museum and the popular cabinet of curiosities of Europe, ‘dime’ museums became a popular pastime for New Yorkers in the late 19th century. They were a hodgepodges of exhibits, from people with extraordinary abilities to exotic foreigners.  In places like Huber’s Museum in Union Square, some of the most popular attractions were humans with various deformities, the individuals who would make up the freak shows of Coney Island. Few considered these people in need of care, and they were often harshly abused by their handlers.

What was going on at Huber's Museum in March-April 1901? Señorita Valletta, the Daring lion tamer! #TheKnick pic.twitter.com/t9ClZGQwOk

Conjoined twins seen as less than human in 1900s. The Brothers Tocci were considered one boy, two heads: #TheKnick pic.twitter.com/oA3yjPbA6X

In a society so clearly judgmental of non-reproductive sexual behavior, STDs were poorly understood.  Syphilis remained a deadly illness running rampant through hundreds of New York brothels. Some protection, like condoms, did exist at the time, but they were terribly uncomfortable and not consistently made. Pregnant girls were forced into the treacherous world of back-alley abortions. Many died during procedures — or afterwards due to unregulated and filthy conditions — and their bodies dumped into the river.

A "brothel on 29th Street" would be one of dozens located in New York's Tenderloin district #TheKnick pic.twitter.com/Er6a0mGoPt

Prostitution in the Tenderloin was rampant yet curiously contained in decorative trappings of Gilded Age. #TheKnick pic.twitter.com/61nKqTnwPf

THE BIRTH OF HARLEM

Violent racial tensions in neighborhoods like Five Points and the Tenderloin forced many black New Yorkers to move north — to the largely Jewish neighborhood of Harlem. By the year 1900 thousands of African-American lived here, creating a foundation for the huge wave of new residents who would arrive a couple decades later, turning Harlem into the center of American black culture.

Harlem 1901: Thousands of black New Yorkers were recent arrivals but not yet the cultural mecca of 1920s: #TheKnick pic.twitter.com/E6K1pnreFo

"Little Africa" had always been the nickname of 19th century black neighborhoods in NYC. Harlem would eventually gain prominence. #TheKnick

The greatest waves of immigration into America came in the early 1900s, and the largest group among them were southern Italians. Unlike the earlier wave of Italians, Sicilians were poorer and less educated. Difficulties in understanding led many New Yorkers to consider them a vastly inferior class and even dangerous.

While the modern restaurant was essentially invented by Delmonico’s in the early 19th century, it wasn’t until the Gilded Age that the delights of public dining were properly indulged. With the influx of opulent life came the finest hotels and eateries, all equipped with modern conveniences. Most were situated on Broadway, from Union Square to Herald Square. Longacre Square (not yet Times Square) was a few years away from becoming the center of New York nightlife.

Sherry's Restaurant was one of top NYC restaurants and they served the best ice cream in the city. #TheKnick pic.twitter.com/ZMlFzLT6xK

The ball is at Waldorf-Astoria, NYC's finest hotel in 1901, 34th and 5th, today site of @EmpireStateBldg #TheKnick pic.twitter.com/55mdPOHur4

Astor had several hotels in progress including the Hotel Astor in Longacre Square: #TheKnick https://t.co/4cDErKypS6 pic.twitter.com/wlBLMA43Bo

For more historical Tweets of The Knick and other television shows, just follow me on Twitter at @boweryboys.