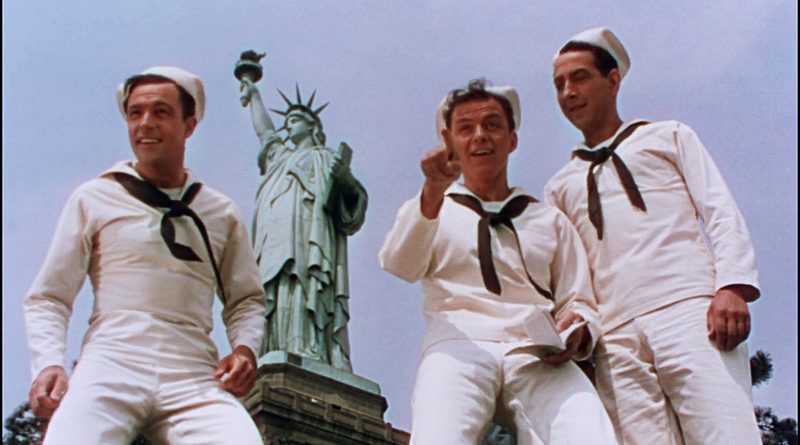 Join the Bowery Boys Movie Club! Support us on Patreon at any level and get these Patreon-exclusive, full-length and ad-free podcast. Each month we talk about one classic (or cult-classic) film that says something interesting about New York City.

On The Town, with lyrics by Betty Comden and Adolph Green and (some) music by Leonard Bernstein, puts a fairytale spin on post-War 1940s New York City as it follows three sailors on a big-city adventure — knocking down dinosaurs, finding love, singing their hearts out. This screen musical classic mixes both studio and on-location film shoots, offering extraordinary views of Times Square, Rockefeller Center and Coney Island.

On The Town is not simply a movie about New York City, but about being a tourist in New York City. And musical lovers! You will especially appreciate Tom’s deep dive into the lyrics of songs like “Come Back To My House,” chock-full of references from New York City’s past.

Listen in as Greg and Tom set up the film’s backstory — highlighting the many changes made in the transition from stage to screen — then give a joyful spoiler-filled synopsis through the film’s breezy story. (Not every aspect of this film ages well!)

Should you watch the movie before you listen to this episode? This podcast can be enjoyed both by those who have seen the film and those who’ve never even heard of it.

We think our take on On The Town might inspire you to look for the film’s many fascinating (but easy to overlook) historical details, so if you don’t mind being spoiled on the plot, give it a listen first, then watch the movie! Otherwise come back to the show after you’ve watched it.

The film is available on iTunes, Amazon, among other streaming services.

To get the episode, simply head to Patreon and sign up to support the Bowery Boys podcast at any level.