On May 30, 1883 — one week after it officially opened — 12 people were killed in the collapse of the Brooklyn Bridge.

Except of course, the Bridge didn’t actually collapse. 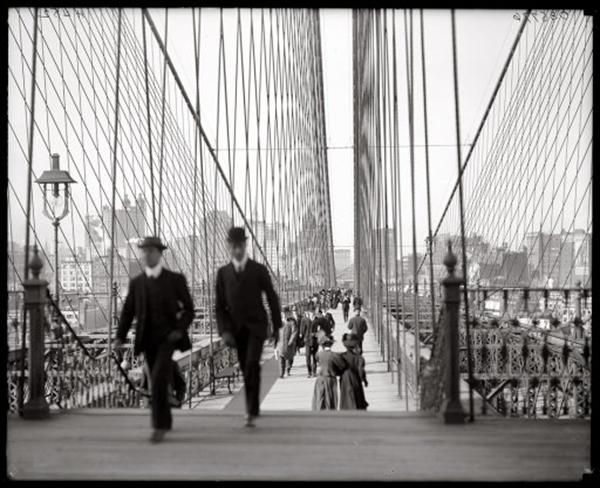 The prior week, the Brooklyn Bridge opened to terrific fanfare, with almost 14,000 people invited to cross this monstrosity which had sat in their harbor under construction for years. The experience of crossing for the first time — to experience the sprawling city from a vantage in the harbor and at equal height of the tallest buildings of the time — must have been immense. And rather frightening.

One week later, on May 30th (Memorial Day that year), the path was still clogged with curiosity seekers. A woman fell on the stairs walking up on the Manhattan side, and her friend screamed. Â Just this unnerving act alone created a rumor that the new bridge was about to collapse, that it couldn’t take the weight of all these people. 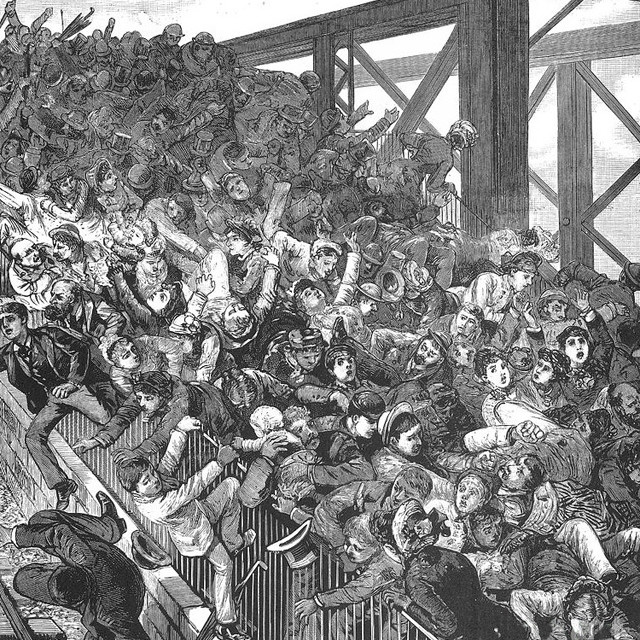 Panic ensued and people stampeded in every means possible to escape off the bridge. I feel the editorial from old newspaper the Brooklyn Daily Eagle says it best:

“Two men tried to raise the prostrate woman and were instantly trampled and paid forfeit with their lives. In a few seconds human beings were piled four deep at the foot of the steps, and the crowd was hurried over them.” 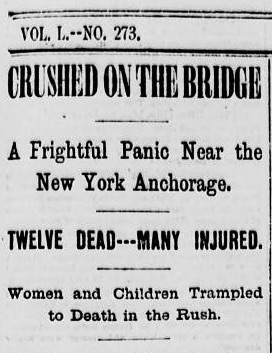 From Â the report of a police officer on the bridge: “I was just above the stairs, at the side of the promenade. There was a crowd going in each direction and I was trying to keep them moving. Â A woman stumbled on the stairway below the landing and fell. Â Another woman at the head of the stairway saw her fall, and she screamed. The whole thing was caused by that woman screaming.”

“Then came the rush and t he panic. Â I succeeded in getting up the woman who had fallen, but my hands were stepped on and my head kicked. Â I triedÂ to drive back the crowd but could do nothing. Â It seemed as though the people didn’t see the stairs till they were pushed headlong down them by the rushing crowd behind.” 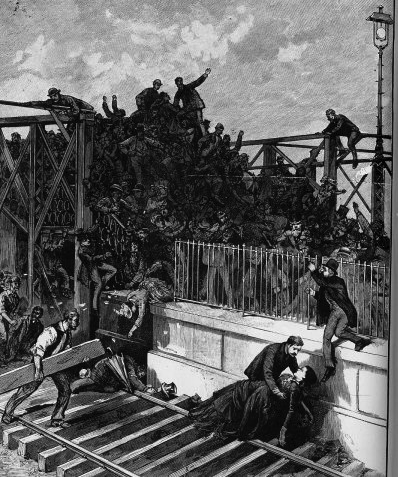 Under a grim heading ‘The Pile of Dead’ in the New York Sun sits some frightful descriptions by survivors. “I felt the pulse of a number of those who were taken out. Â The first was a woman, who lay on her back just below the steps, with one arm twisted under her and the other hand clenching the reman an of a child’s shawl. She had gray hair. Â Her forehead had been cut by the fall and her face was stained with blood. Â I believe she died before they go there off the bridge.”

In the bloody tussle, 12 people died and over 36 were seriously injured.

Add the 27 fatalities that occurred during the actual construction of the bridge, and you can definitely say that the Brooklyn Bridge got off to a very morbid start.

2 replies on “The Brooklyn Bridge Collapse That Didn’t Happen”

so it didnt fall, did it?

Governor Al Smith was a small boy when this happened and he remembered victim’s change and small items falling to the streets below.