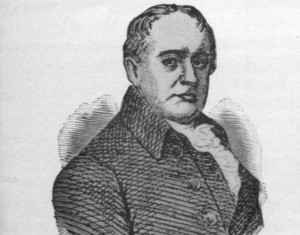 Politics is a messy, incomprehensible thing sometimes. Keep Blagojevich, Senate appointments, and all other recent government scandals in mind as you traipse through the thickets of political absurdity below.

The legendary Democratic political machine had of course been around long before, founded in 1789 as a social club that swiftly developed political interests. (Most notably, the presidential candidacy of Aaron Burr in 1800.) And it wouldn’t reach full strength until the election of the outrageous Fernando Wood in 1854.

But 1815 was a most pivotal year (a ‘tipping point’ if you like), the moment Tammany first experienced its most bittersweet tastes of omnipotence and backlash, in the brief toppling of the city’s most charismatic leader, DeWitt Clinton. And that’s where Jacob Radcliff and John Ferguson come in. They are by no means exceptional leaders; they were Tammany men at the right time, in an era before absolute corruption pervaded the society’s every activity.

In New York politics circa 1810, the mayor was not an elected post, but rather chosen by a state-run Council of Appointments, one year at a time. The ambitious and well connected Clinton (his uncle George once being governor) had already been New York mayor for several years, from 1803-1810, excepting a single year (between 1807-1808) when he was replaced by Revolutionary War hero Marinus Willett. You can hear all about it in our DeWitt Clinton podcast from last year. 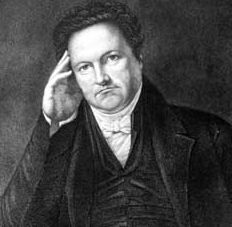 New York politics is so entangled with overlap in the 1810s that it’s virtually impossible to explain in a short article. For instance, Clinton, who was a lifelong Democratic-Republican** (the precursor to today’s Democratic party), eventually became an enemy to most of New York’s disenfranchised faction of that party. And he even ran for president — while mayor — as a Federalist! Clinton, pictured above, with a headache trying to keep it all straight.

On top of the usual partisan stew of a swiftly growing city, the war of 1812 left party affiliations malleable, with Federalists opposing action (even suggesting secession from the United States!) and staunch Democratic-Republicans generally favoring the conflict. Thus, as you can imagine, it would be difficult to remain balanced in such unstable political waters, even for somebody as saavy and popular a career politician as Clinton.

In this wily tug-of-war between the Federalists and Tammany candidates, Clinton was again unceremoniously ousted in 1810 and replaced with Jacob Radcliff, an associate of Alexander Hamilton and a former justice of the New York Supreme Court whose lasting claim of fame would be as a founding father of the city of Jersey City, New Jersey.

The winds shifted again the next year, and Clinton was placed back in the mayor’s seat in 1811. (Following this so far?)

As war broke out with England in 1812, all political parties and affiliations seemed to disintegrate entirely. As James Renwick says in his biography of Clinton, “On this occasion the old party lines were completely obliterated; no trace of affection for Great Britain remained in any mind, and the very name of federalist only exists to be used as a mode of discrediting a political adversary in the minds of the ignorant.”

As a result, many Federalists jumped ship to join the surging Tammany Democrats. Among their number was formery mayor Jacob Radcliff, warmly greeted by Tammany head ‘grand sachem’ John Ferguson. 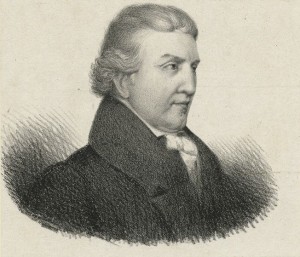 And who better to replace him than the head of Tammany himself, John Ferguson? However, whether by intent or sudden whim, Ferguson stepped down after only three months in office to take on the far-more lucrative job of officer of the Port of New York custom house, according to one source a major center “of federal revenue, political patronage and potential graft.”

And so he was replaced with….Jacob Radcliff again, now a mayoral appointee representing an entirely different political party from the first time he had the job!

Clinton had the last laugh in all of this. Most incredibly, public support for Clinton was so high that, for political sake alone, “Tammany …. took the utmost pains to represent the removal as only a political exigency” and issued a ‘vote of thanks’ to the former mayor via the Common Council (equivalent of today’s City Council). Clinton became governor in 1817 and handily swept away his opponents.

Meanwhile, Radcliff was caught up in a scandal when, halfway into his term, he was caught distributing a list of potential Tammany replacements for all still-remaining Federalist council members, a politically insensitive move which galvanized the Council and ensured that 1816 would be Radcliff’s last year ever as mayor.

**To make it all the more confusing while doing research, Democratic-Republicans are referred to as Democrats in some later histories, Republicans in others!