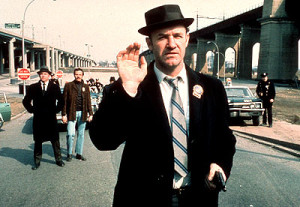 The Film Forum is in the midst of their five week NYC Noir screening series, featuring some of the best thrillers, mysteries and action films set on the streets of the city. Every week, we’ll feature a bit about one of the films, and encourage you to go check out some of these classic flicks. Past entries of this series can be found here. Showtimes and other movies in the series can be found at the Film Forum’s website.

Not that I’m complaining mind you, but sometimes New York’s love affair with the movies can be a little, well, nerve-racking. Several months ago I was jogging along the East River when I spied a horrible multi-car collision, and a police vehicle flipped on its side. Last week, I spotted that very same catastrophe from a different angle, in the movie The Bourne Ultimatum.

Several weeks before, the street in front of my office building was covered in post-Apocalyptic decay and overgrowth — and the film crew capturing it — for the upcoming Will Smith movie I Am Legend. And woe to the poor Lower East Sider on her way home stumbling onto Orchard Street a couple weeks to see utter destruction of her neighborhood (courtesy of J.J. Abram’s new film).

But I cant imagine how normal New Yorkers endured the filming of William Friedkin’s Oscar-winning crime caper The French Connection. Almost the entire film was shot in New York — all over the city, uptown, downtown, on bridges, in bars. And much of it, on the fly and illegally.

Take the film’s most iconic scene, and possibly the greatest car chase scene in the history of film and cars. It’s filmed under the elevated D-line train, near Coney Island, along the course of 26 blocks, over the course of five weeks. However, N train stands in for what was then the B train, because, being New York in the 70s, they could find no clean-looking B trains.

Most of the ‘extras’ were actual residents going to and fro in their daily business. In fact, a car accident that happens at the corner of Stillwell Ave. and 86th St actually happened; the unlucky vehicle was owned by a guy on his way to work. The producers later paid for the cost of repairs. Today this would have spawned a multi-million dollar lawsuit! 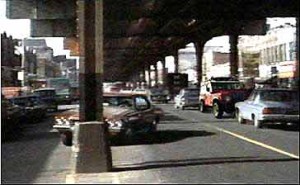 That was the least of the mayhem. The Mayor’s Office for Film, Theatre and Broadcasting, the permit office Hollywood must go through in order to film, was not quite the crack-down organization it is today. Friedkin and his producers filmed many scenes without the city’s permission at all, including much of the car chase, a staged traffic jam on the exit ramp of the Brooklyn Bridge, and an entire sequence on what is now the S-train between Grand Central and Times Square!

One treasured New York landmark featured in the film is sadly no longer with us. Popeye Doyle (Gene Hackman) and Cloudy Russo (Roy Schieder) stakeout at Ratner’s Deli in the Lower East Side right off the Williamsburg Bridge. Ratner’s was one the city’s legendary old Kosher deli’s, along with Katz’s just a few blocks away. Later in its life, it became the super-swanky ‘speak-easy’ Lansky Lounge. It’s now a mattress store.

Like The Taking of Pelham One Two Three, the movie brilliantly captures a New York on the precipice of near collapse but still retaining its rough-hewn charm. The fact that this classic could be filmed here — almost scot-free — gives a little insight into how massive and uncontrolled the city had gotten. You can barely make a vacation video now without a permit!

One more truly bittersweet reason to see this movie this week — watch the skyline of lower Manhattan. In one sequence, you can clearly see the World Trade Center under construction.

By the way, for those who care, there are three locations in Manhattan of the fashion clothier French Connection. 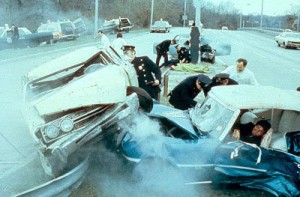