As a former mayor of New York City runs for the White House — and our current one clumsily flirts with the possibility — we think its time to familiarize ourselves with other men who’ve held the job, from the ultra-powerful to the political puppets, the most effective to the most useless. Our profiles to other gentlemen in this series can be found here. 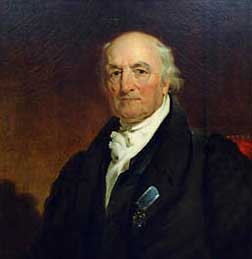 One might look upon Rudy Guiliani or Hillary Clinton — or for that matter, most any of the people running for president — and see the very epitome of career politicians, people we seem to exist for the mere notion of public office, no matter how mired in the muck of scandal. I do believe, however, Rudy and Hil could learn some lessons from the towering Richard Varick, who became mayor in 1789, succeeding last week’s featured mayor James Duane.

Varick had a virtually unblemished military record during the Revolutionary War but for one unfortunate association. During the early days of battle, he served as secretary to General Philip Schuyler, later father-in-law to Varick’s friend Alexander Hamilton. He swiftly moved on as inspector-general of the newly formed military base at West Point (it wouldn’t become a military academy until 1802) where he would become entangled with a potential political albatross — Benedict Arnold.

Serving as Arnold’s loyal aide-de-camp, he was unaware that his friend was selling West Point — and the American cause — down the river, plotting to trade the base’s secrets to the British. Arnold’s treachery was found out, and it comes as no surprise that Varick too was suspected of treason, but was later exonerated. The sting of betrayal was allieved slightly when Varick was appointed Washington’s personal secretary in the later days of the Revolutionary War. 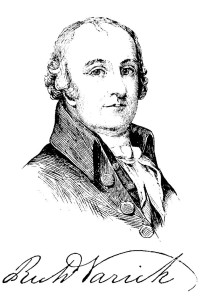 Not one to let one sticky political association bog him down, Varick was appointed a recorder of New York City once the British were swept out of town, and eventually appointed mayor of Manhattan in 1789 only after a host of other political positions stateside, including speaker of the state assembly and attorney general. Interestingly he would step down as New York Attorney General and be replaced by another Revolutionary figure of great controversy, Aaron Burr.

The city population doubled under his administration, so naturally basic civic neccessities like water and disease control became the focus of his attentions. Due to his support of the quite unpopular Jay Treaty in 1794, he was almost literally driven out of City Hall by a mad riot.

In a sweep of political fortunes that made Thomas Jefferson president of the country, Varick was then replaced in 1801 by Edward Livingston. Like James Duane, Varick is immortalized in downtown Manhattan with a street named after him. The present street cuts straight through the spot where Varick’s property once sat.

I’ve been researching the famous African-American preacher, James Varick (born c. 1750) whose mother was a slave in the Varick family in Hackensack. His father was Richard Varick, born around 1728 and of Dutch origin. Perhaps James Varick was Mayor Richard Varick’s cousin.

Mayor Richard Varick’s father was Jan (John)Varick. Jan Varick had a brother named Richard who may have been the father of James Varick.

James Varick and Richard Varick, as well as his older brother, Abraham Varick (my gggg-grandfather) were first cousins about the same age and surely knew each other well since they early attended the very same church in childhood.

That’s very interesting and I would like to know more from you on this topic. My interest in Richard is through researching the Dey family. Richard’s mother was Jane Dey, the sister of Col. Theunis Dey (Dey Mansion, NJ).

We have an interest in Varick. Dr Henry REEDER purchased the Dey property in the 1840s. Dr Reeder’s wife Mary Ann Reeder, (ms. LAING) was sister to my wife’s Gt gt Grandfather John Laing. Both John and Mary Ann were born in Jamaica but returned to England in 1800 with their family. Mary Ann married Dr Reeder in 1926. They moved to America with their children in October 1840. We would be interested in any information on this family.