Skip to the content
The Great Fire of 1835 devastated the city during one freezing December evening, destroying hundreds of buildings and changing the face of Manhattan forever. It underscored the city’s need for a functioning water system and permanent fire department. So why were there so many people drinking champagne in the street?

Listen in as we recount this breathtaking tale of the biggest fire in New York City history.

And now you can listen to it directly on SoundCloud:

Nicolino Calyo captured the terrible sight of the blaze as it might have looked fromÂ Red Hook, Brooklyn 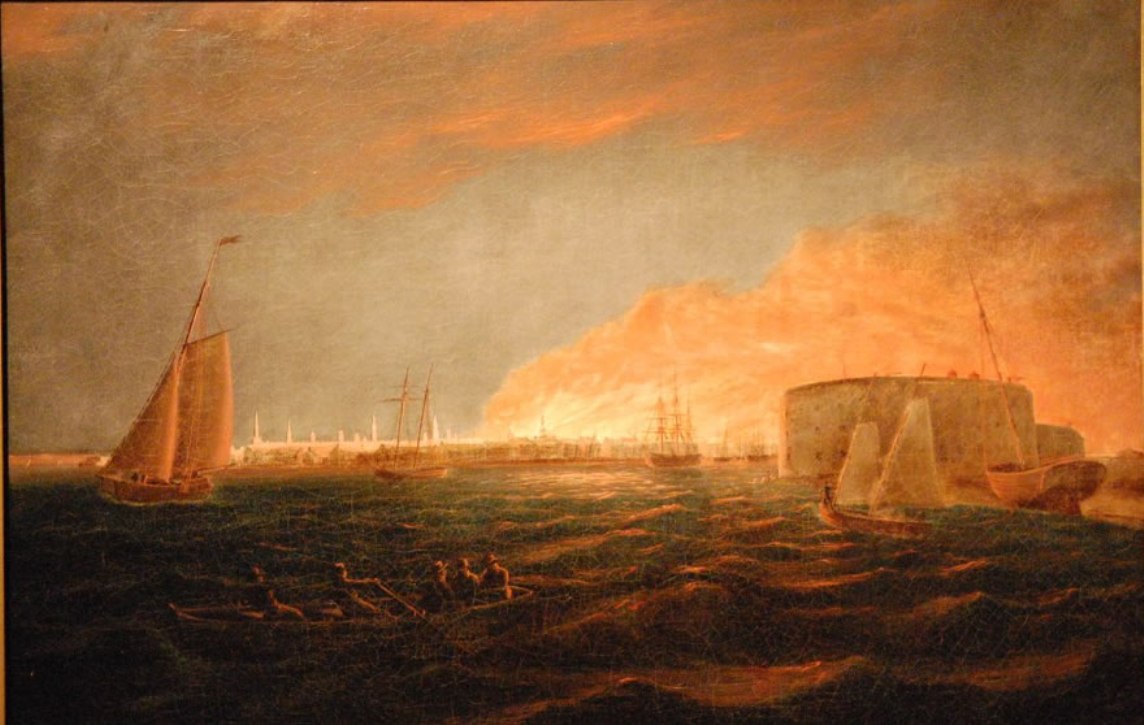 Before the blaze: Charming Wall Street in 1825, from a 1920s guide book. Prosperity from the Erie Canal was just around the bend. (Courtesy Ephemeral New York) 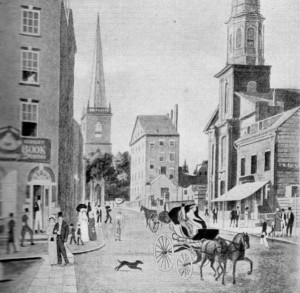 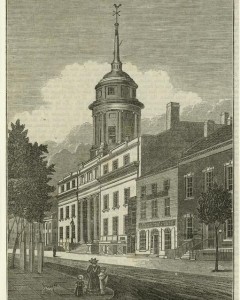 What’s the damage?: the red areas below indicate the blocks destroyed by the swift moving conflagration (map courtesy CUNY) 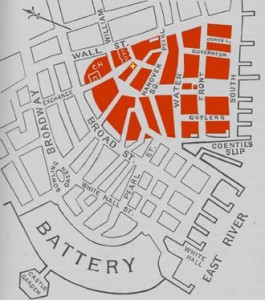 City officials, including mayor Cornelius Lawrence, could only watch and stare as the blaze over takes a stretch of prominent buildings. Also included below is Charles King, who watches as his newspaper the New York American is overcome by the fire. 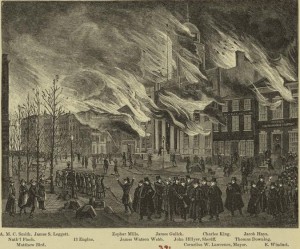 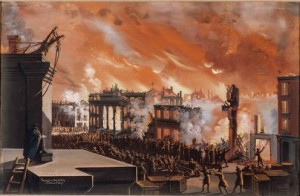 Another interpretation from the same angle — the futility of battling the blaze was chillingly illustrated from the corner Wall and William streets, where winds carried the flames from building to building, high above the heads of fighters below. 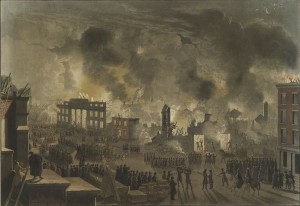 As the old Dutch Church on Garden Street caught fire, a morose parishioner mounted the organ and began playing a dirge. (Where’s Garden Street? According to Forgotten New York, Garden Street was “between William Street and Broadway, just south of Wall Street” and is now part of Exchange Place today.) 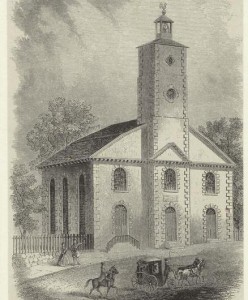 Aftermath at the Merchant’s Exchange. Many business owners actually tranferred their stock to the Exchange building, unfortunately thinking it would be impervious to the encroaching flames. 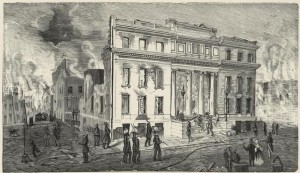 The devastation that met New Yorkers the following day led most to believe the city would never recover. 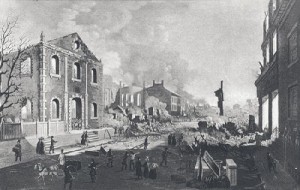 Most of the buildings on today’s Stone Street were built in the immediate years following the fire, Greek Revival-style countinghouses that are refitted for modern times as taverns and restaurants. It’s also one of the few cobblestone streets still around in the Financial District area. 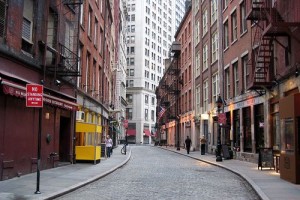 Who exactly was Nicolino Calyo, the man who painted so many vivid pictures of the Great Fire? Nicolino Vicomte de Calyo was a political dissenter who fled Italy in the 1830s and settled in Baltimore, becoming entranced by the new American landscape. Although his most famous depictions of New York are of the city in flame, he also painted a few serene views (like the one below, a vantage of the harbor from Brooklyn Heights).

His works are in many New York museums, including the “Burning of the Merchant’s Exchange” which is at the Museum of the City of New York.

Another cool resource on the Great Fire is up at the CUNY website, with more pictures and more backstory as to New York’s capacity to fight blazes in the early 19th century.

And if you’re so inclined, why not visit the New York City Fire Museum? It’s in SoHo and afterwards you can take a stroll down to the Financial District and imagine what it all might have looked like.

This was very interesting although I was looking for a devastating fire in upper new york,,,passed grants tomb…where many, many houses were destroyed….I’llkeep on looking…don’t know the month but it was 1835…This web-site was great.

This was a fantastic podcast! I love learning history like this. You made it exciting and enjoyable, really placing the listener on the scene. I also appreciated the history fires before the 1835, as well as the bits about the birth of fire fighting, etc. Great job!

loved your site on the Great Fire of 1835. could you please tell me where you found the Robinson lithograph of the Merchant’s Exchange on fire? It’s the only version I’ve ever seen with the mayor and other officials identified. knowing the collection where the print is housed would be really helpful to my research.

Hi Douglas. Almost all the artwork is either from the New York Public Library or the Library of Congress. Also check with the Museum of the City of New York who have an excellent archive.

[…] those surveying the devastation, it seemed like the city might not recover. The financial heart of New Yorkâ€“â€“and of the whole nationâ€”was in ruins. Seven hundred […]