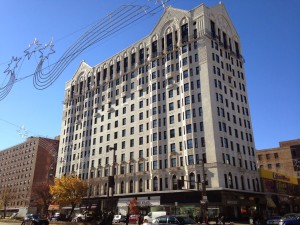 The Hotel Theresa, as it looks today, White Castle and all.

PODCAST The Hotel Theresa is considered a genuine (if under-appreciated) Harlem gem, both for its unique architecture and its special place in history as the hub for African-American life in the 1940s and 50s. 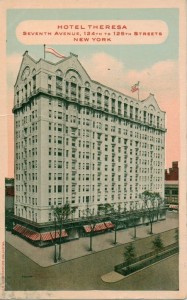 The luxurious apartment hotel was built by a German lace manufacturer to cater to a wealthy white clientele. But almost as soon as the final brick was laid, Harlem itself changed, thanks to the arrival of thousands of new black residents from the South.

Harlem, renown the world over for the artists and writers of the Harlem Renaissance and its burgeoning music scene, was soon home to New York’s most thriving black community.  But many of the businesses here refused to serve black patrons, or at least certainly made them unwelcome.

The Theresa changed its policy in 1940 and soon its lobby was filled with famous athletes, actresses and politicians, many choosing to live at the Hotel Theresa over other hotels in Manhattan.  The hotel’s relative small size made it an interesting concentration of America’s most renown black celebrities.

In this podcast, I give you a tour of this glamorous scene, from the corner bar to the penthouse, from the breakfast table of Joe Louis to the crazy parties of Dinah Washington.

ALSO: Who is this mysterious Theresa? What current Congressman was a former desk clerk? And what was Joe Louis’ favorite breakfast food?

The Hotel Winthrop which sat on the spot of the Theresa before it was torn down in the early 1910s, deemed a bit inadequete for the growing neighborhood. (Courtesy Museum of the City of New York) 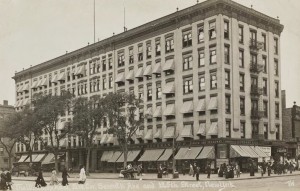 From the February 4, 1917, issue of the New York Tribune, making note of its “large spacious dining room overlooking the Palisades.” 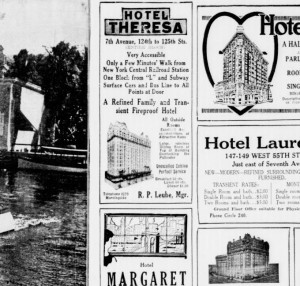 The Hotel Theresa, circa 1915.  Courtesy the Museum of the City of New York 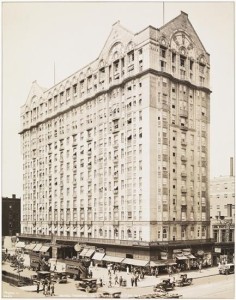 Boxer Joe Louis was one of America’s most famous athletes in the 1940s and a frequent guest at the Teresa.  Joe fought the German boxer Max Schmeling twice, both times at Yankee Stadium.  Max bested Joe in the first match, but on the second go-around in 1938, Louis knocked out Schmeling in the first round.  He enjoyed his win that evening at the Theresa, as thousands of fans gathered in front of the hotel and throughout the city in celebration. 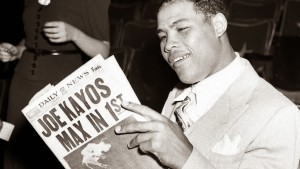 Malcolm X speaking to crowds in front of the Hotel Theresa — back when there was a Chock Full O Nuts on street level! The former Malcolm Little would be very associated with the hotel, headquartering here after his split with the Nation of Islam.  Photo by Larry Fink c/o WNYC 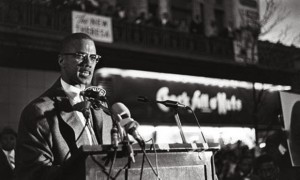 Jet Magazine and Ebony Magazine founder John J Johnson conceived the ideas for both magazine at the Hotel Theresa and frequently published articles about the Theresa. 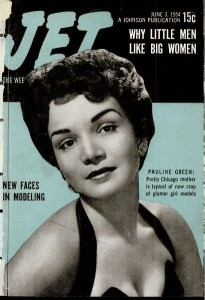 A notice in a 1954 issue of Jet announcing the opening of the Hotel Theresa ballroom, called the Skyline. 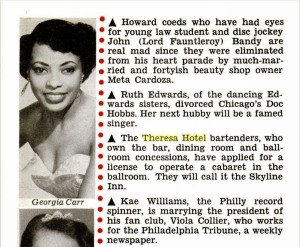 In its final years, the Hotel Theresa was even featured in an Alfred Hitchcock film ‘Topaz’. The film fictionalized and played around with an actual event that took place at the Theresa — the arrival of Fidel Castro here in 1960. 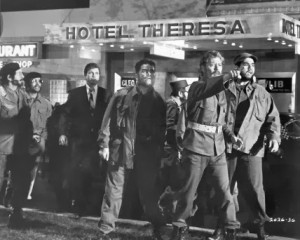 You can see the Hotel Theresa briefly in the film’s trailer (at 1:19):

And finally, I featured the music of Una Mae Carlisle in the show.  She was frequently hired to play the Theresa’s club room in the late1940s.  Tragically, Ms. Carlisle died of an illness in 1956, or else she’s certainly be better known today:

4 replies on “The Hotel Theresa: An historic treasure of Harlem”

Loved this podcast as my mother was born this same year in NY. But one correction. You mentioned that the general area was the first Little Italy. But, in truth, this was Littly Sicily. The area was populated by Sicilians not Italians (yes, there is a difference). My father was born there in 1903.

I heard that Fidel Castro was kicked out of The Plaza or Waldorf Astoria for having live chickens in his rooms. He did not trust the hotel food so they butchered and cooked their own food. The Hotel Theresa welcomed him and his entourage with open arms. Was this area also called Spanish Harlem at one time?

I think the Tribeca Hotel is one of the more romantic hotels in New York.

My first cousin whose name was Jacqueline Starr Hawkins, (Jackie) was in a dancing group with her husband Myron J. Hawkins and Eddie. They danced at the Apollo and etc., The group was called Jackie and Tuffy. It is my understanding that she committed suicide in the Theresa Hotel August 17, 1955. A relative informed me that her death was listed in the Jet magazine. I have been searching out all the information I can about her. I never had the chance to meet her. Do you know how I can find that article in the Jet and how do I go about getting her obituary.
Thank you
Myrna Byrd