Manhattan is profound for the layers of history that exist on even a modest spot ofÂ land. And in the case of blocks south ofÂ the World Trade Center, you donâ€™t even haveÂ to go back far in timeÂ to find some surprising stories of the past.

One hundred years ago, strolling along the southern ends of Washington and Greenwich streets, you wouldÂ have found yourself within New Yorkâ€™s first Middle EasternÂ community.

An approximation of the district in yellow (courtesy the Arab American Museum):

Little Syria (or the SyrianÂ Quarter) featured rug and trinket shops and restaurants with â€˜exoticâ€™ cuisine mentionedÂ frequently by the newspapers of the day. In many ways it resembled the early daysÂ of Chinatown â€“ a closed community, linked by language, rich in history and confounding to most NewÂ Yorkers. 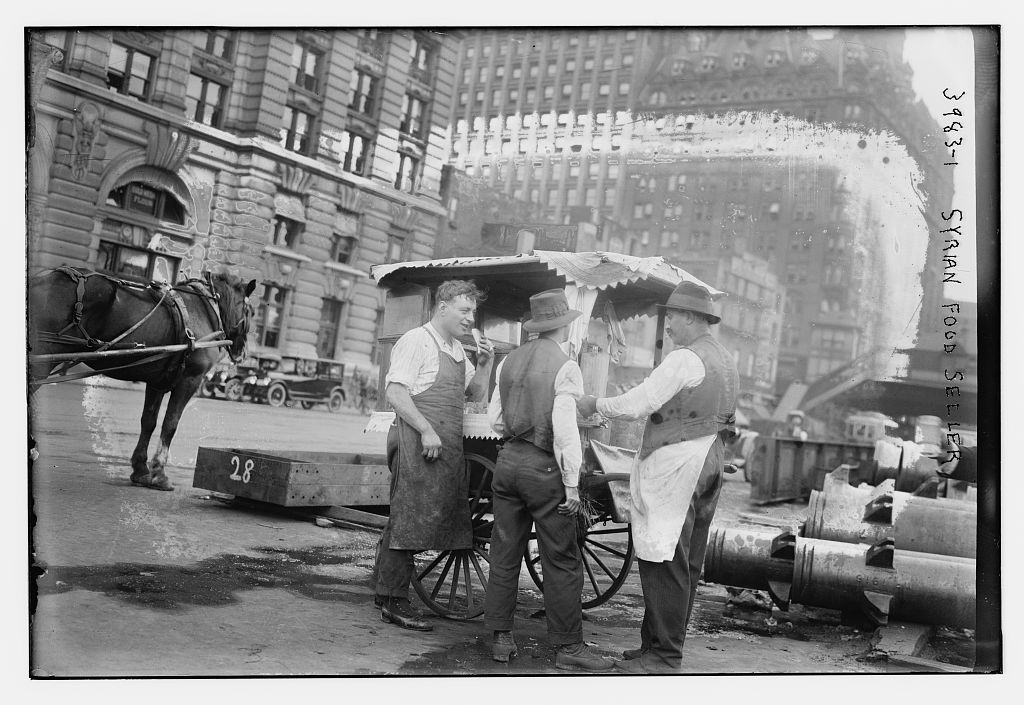 Early New York Times writers wereÂ occasionally fascinated with this unusual pocket of settlement. In 1898, they described it as quiet colony: “It differs much from other foreign quarters in New York. It isÂ fairly clean. Â There is nothing forbidden in the aspect of the people or their places of business. The homes are clean and inviting and the stores where Turkish rugs, laces, perfumes, and tobacco are sold, display evidences of prosperity.” 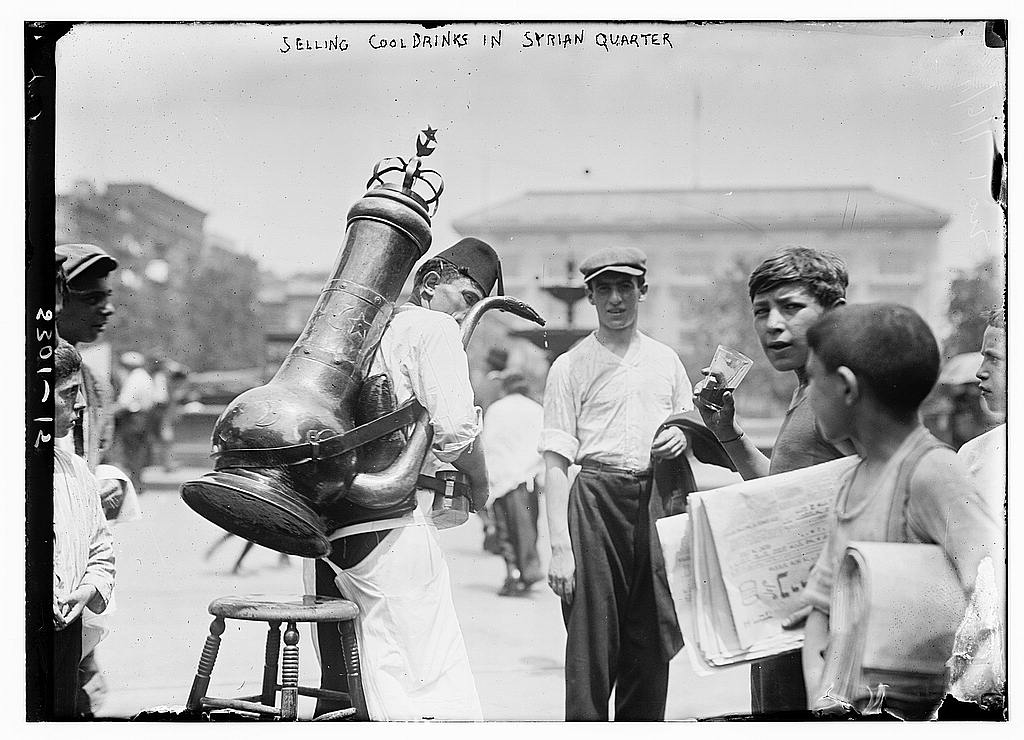 As a Gilded Age New Yorker, ifÂ you knew Little Syria at all — and most New Yorkers stayed away from the ethnic ‘Little’ neighborhoods (Italy, Africa, Hungary) — it was because of the food. Â Another New York Times article from 1899 describes it with the passion of a modern restaurant critic:Â “It is in the restaurants that become cafes, after Syria has eatenÂ her evening meal, that what is perhapsÂ the most interesting life is to be seen.”

Of its inherent exoticness: “One glance at the Arabic bill of fare, written in Arabic script on a flimsy bit of white paper, shows the impossibilityÂ of making head or tail out of it.” 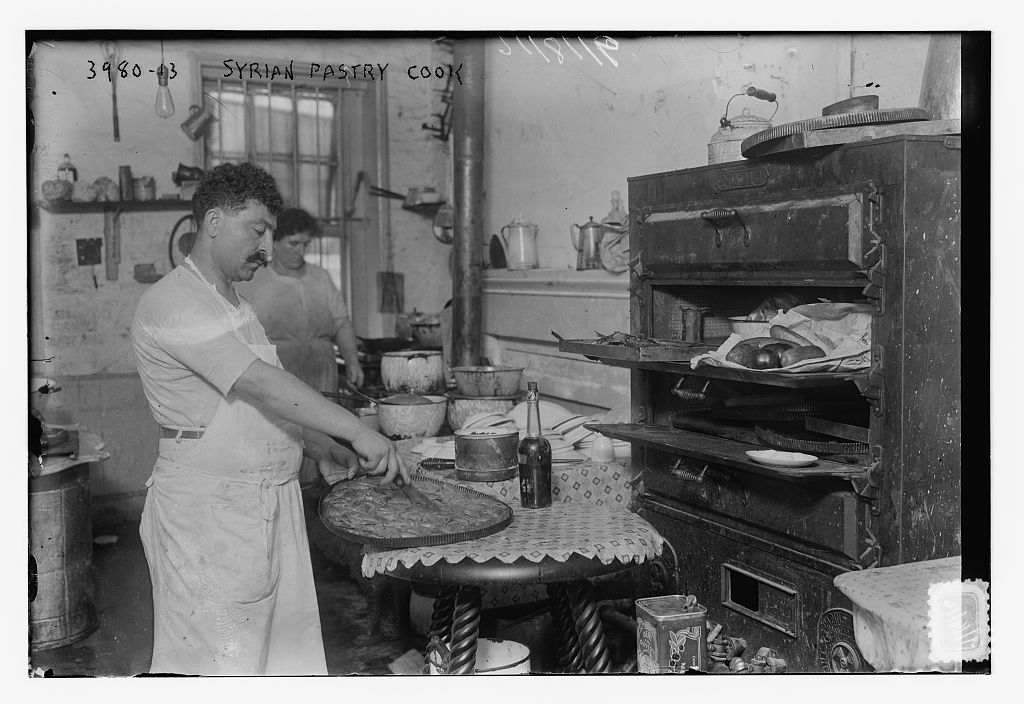 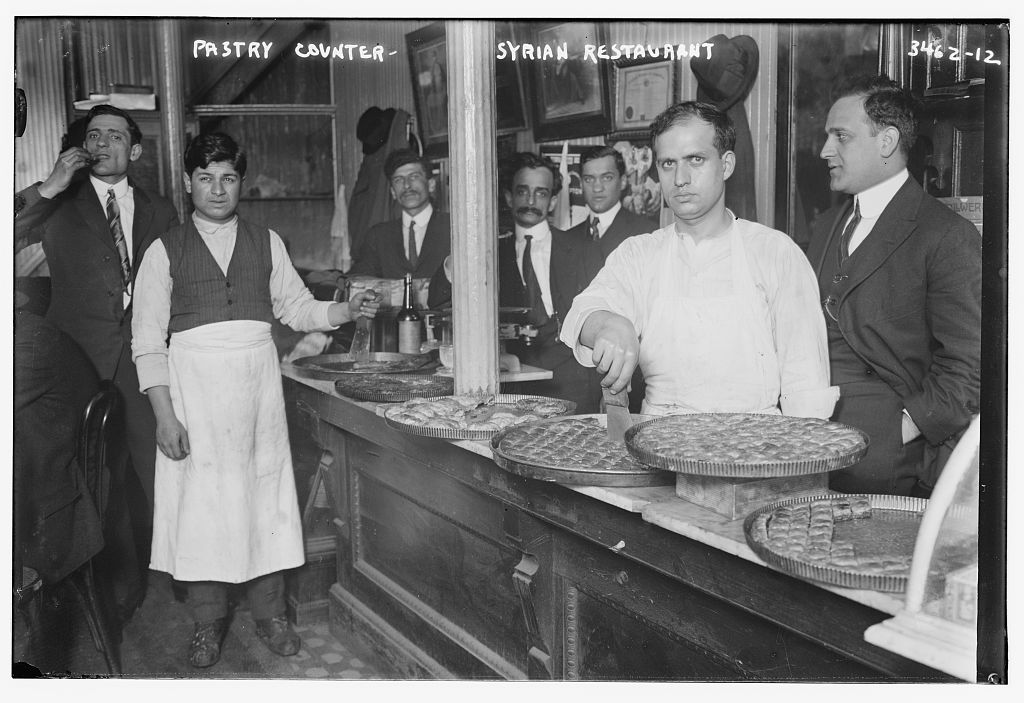 There were clearly few frames of references for those who visited this district. A 1903 New York Tribune describes the population of Little Syria — aka “Aladdin land” — as “fugitives from the Sultan’s tyranny” and describes the streets like something out of a chaotic wonderland:

“The shop windows are filled with huge Turkish pipes, whose water filled bulbs and serpentine stems would seem able to bring to the smoker all the dreams of the Thousand and One Nights. Here too the passerby may see lamps of Damascus brass, both great and small, and lighted by innumerable tiny tapers. They look much as the imagination might picture the lamp of Aladdin.”

People may have been prone to stereotype Syrian shops, but in fact the Syrian QuarterÂ wasÂ known for a wide variety of goods including jewelry, lace, embroidery, rugs, cigarettes, coffee andÂ so-called ‘kimonos’ then (actually kaftans). 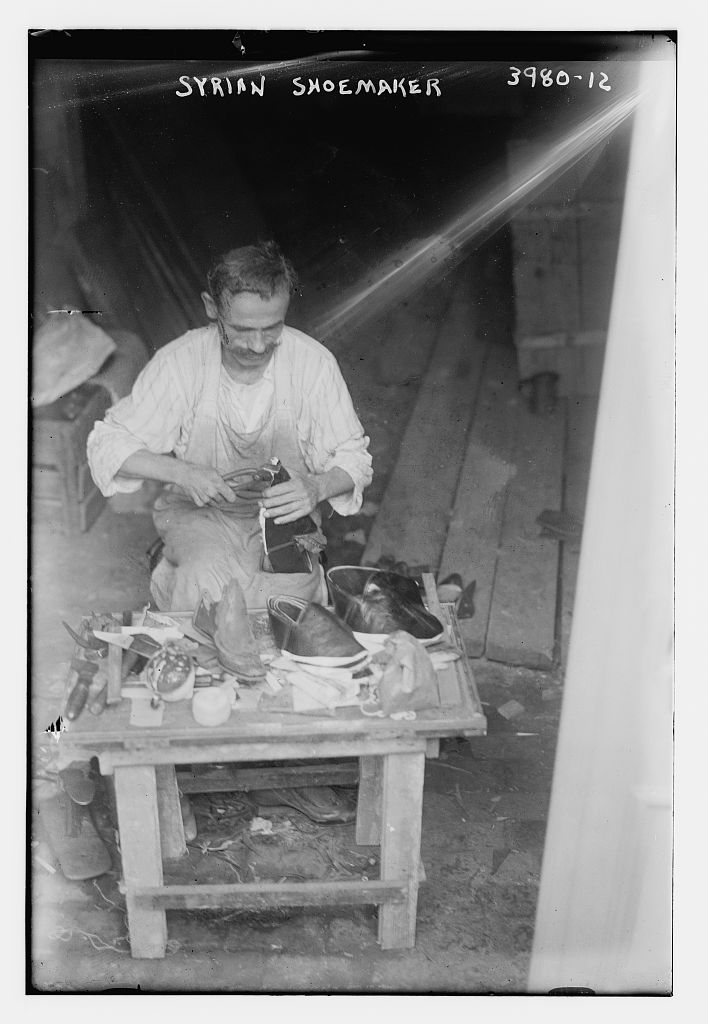 Over a quarter of a million people of Middle Eastern descent were living in America by the early 1920s. Although from a great swath of locations, they were frequently just called ‘Turks’ or ‘Syrians’. (The Sultanate of Ottoman Empire was abolished in 1922 andÂ its territories made independent. )

The first Middle Eastern immigrants to the United States were Christian Syrians and mostly young men, following a similar pattern of immigration as the Italians. Â  Women and children began coming over soon afterwards once their husbands or brothers established themselves, either as workers on construction crews or as private business owners.

In 1903 the Tribune observed a line of “olive skinned women” diligently sewing on the street, employed asÂ seamstresses in a scene being played out all over New York in other neighborhoods. Â Many in the Syrian Quarter were silk and lace manufacturers back home, and some even commuted to work in Paterson, NJ, the so-called silk making capital in the United States at the turn of the century. 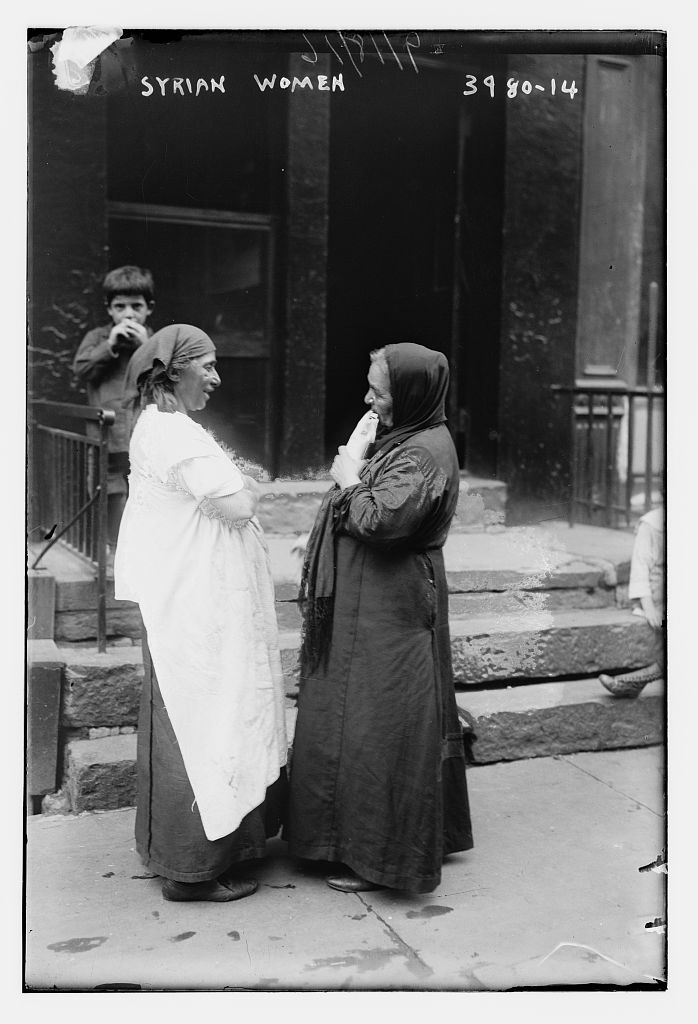 The pictures you see in this post were all taken sometimes between 1915 and 1916, a traumatic time in world affairs and the Middle East in particular. SomeÂ were Armenians, cut off from regular news from back home and only sporadically aware of the horrors their families were experiencing.

The men who met up in Washington Street cafes smoked hookahs, drankÂ coffee and played gamesÂ of chess orÂ checkers. Â Unlike the stereotypes presented in the press of ‘simple’ shop owners, many were well educated and spoke English. The Canadian author Norman Duncan wrote an entire book on the quarter calledÂ The Soul of the Street, focusing on the political conversations fromÂ the cafes. (You can check it out here although it’s a fairly impenetrableÂ read today.) 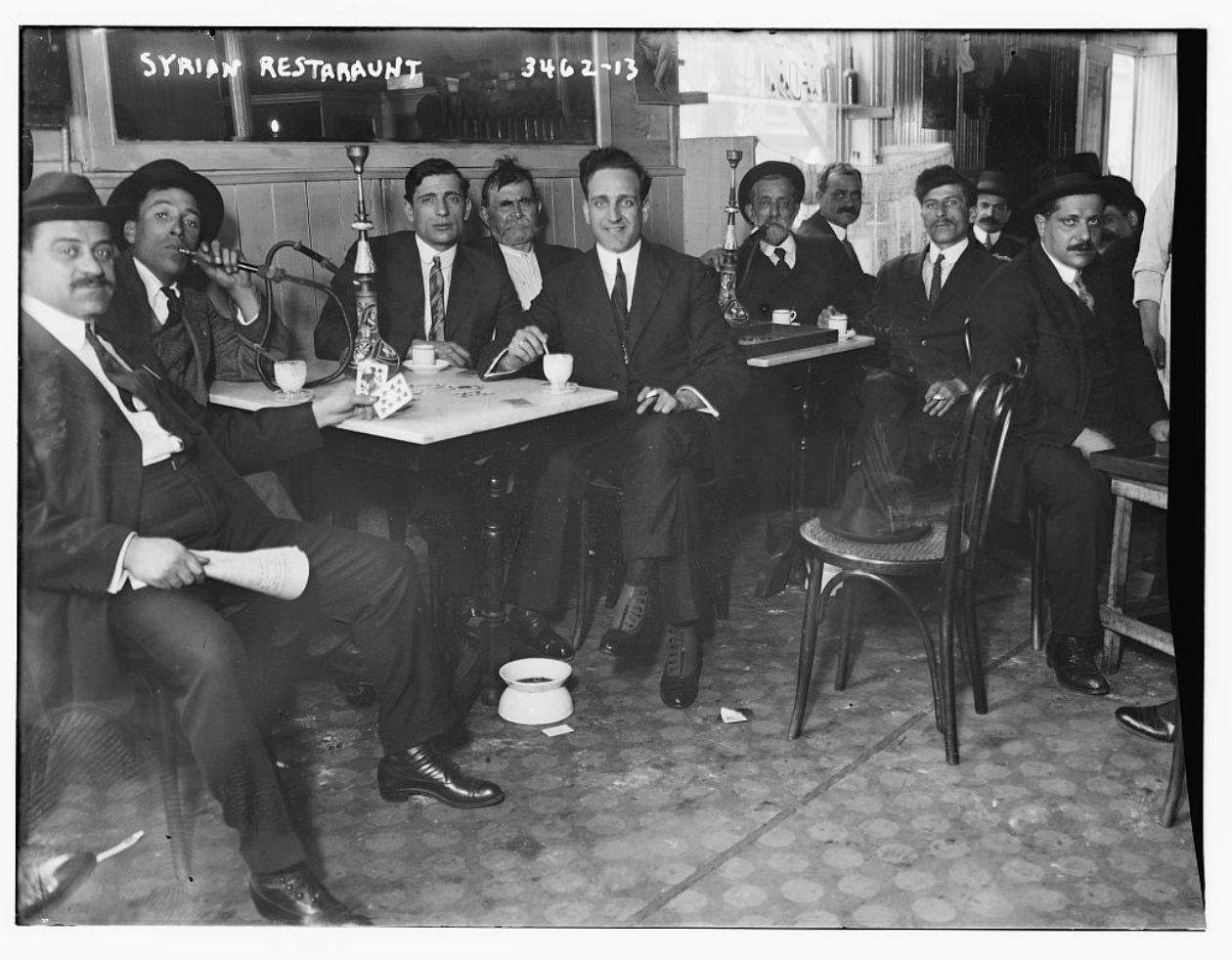 While the earliestÂ residents of the Syrian Quarter were actually Syrian Christians, by the 1910s both Christians and Muslims lived in the neighborhood. Â The only vestige of Little Syria that remains today is the home of a former Catholic congregation — St. George’s Syrian Catholic Church at 103 Washington Street.Â

The congregation moved here in 1925, but by that time, a larger Middle Eastern community was developing in Brooklyn on Atlantic Avenue. Many vestiges of Brooklyn’s ‘Syrian quarter’ still exist today along Atlantic Avenue between Court Street and the waterfront, most notably Sahadi’s.

Below: An illustration from a 1918 Methodist journal called World Outlook, marking the ethnic enclaves of New York 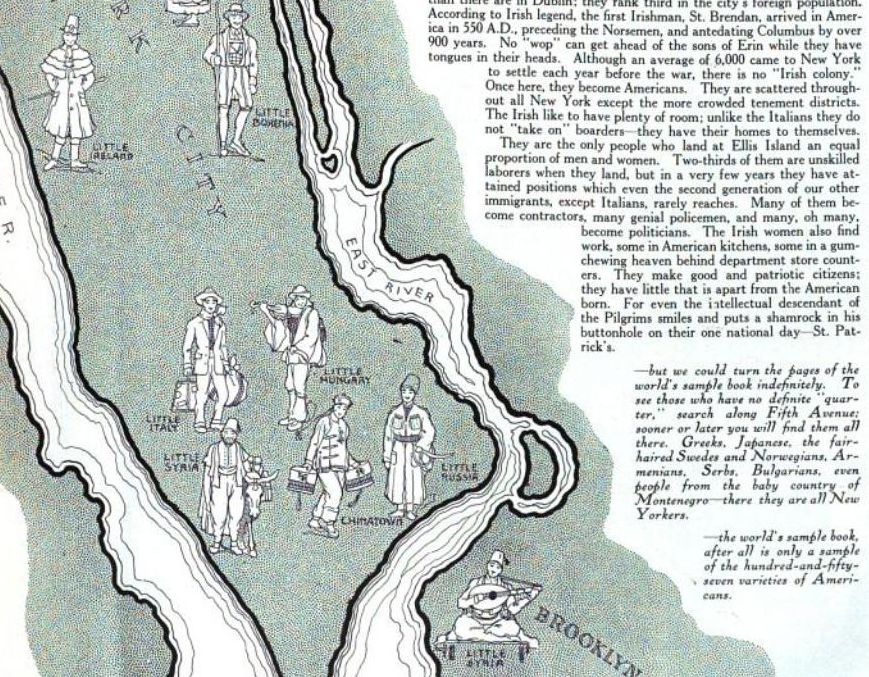 Most of Manhattan’s original Middle EasternÂ neighborhood was eliminated with the construction of the Brooklyn-Battery Tunnel which opened inÂ 1950 (although a long construction period cleared out the neighborhood by the early 1940s). Â Those shops that managed to stay onÂ shared the streets with a surprising new neighbor â€“ radio. 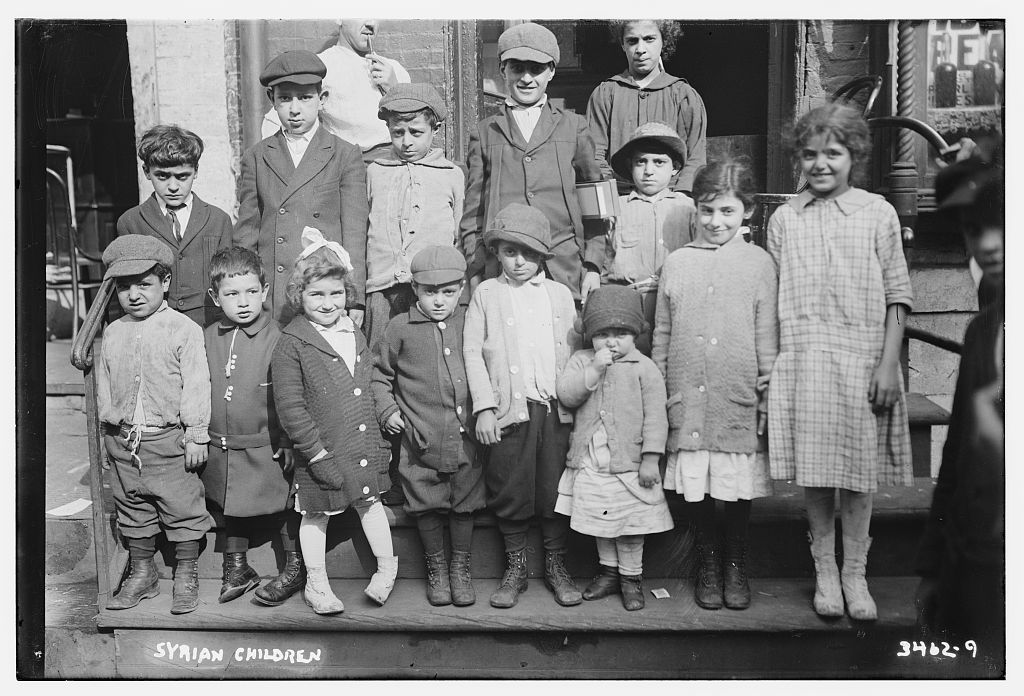 We are a city of immigrants… another great post. Thanks!