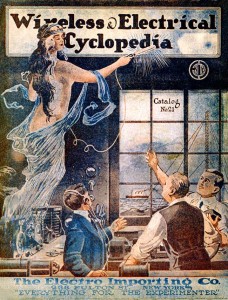 If you were the type of child who idolized the inventor over the sports hero, then the decade of the 1900s was something of a creative revolution. Children enamored by the flurry of new inventions in the late 19th century — the railroad, the telegraph, the camera — could only imagine interacting with these devices. The Lionel train set, introduced by a toy store on Cortlandt Street in 1900, was a perfectly marvelous device. It just wasn’t the real thing.

But with new wireless telegraphy (soon to be called ‘radio‘), one needed only the basic technology — the battery, the tubes, the coils. No tracks, no excessive lengths of wiring, no expensive film processes. A curious child could jump right into the world of radio, into the very same airwaves being used by adults.

Radio technology was barely a decade old when a marvelous company appeared in downtown Manhattan called the Electro Importing Company which opened for business in 1905. They soon moved to permanent offices on 233 Fulton Street. (An ad below also listed an office at 245 Fulton Street.) Although they also sold radio parts to adult wireless operators, basic receivers and transmitters could be produced and sold to children as sophisticated toys. As radio was vastly unregulated before World War I, a young boy or girl could literally send and receive transmissions from their own bedroom, sending out Morse code and picking up messages from miles away.

Just imagine having that power as a 12-year-old. One hundred years later, children would be dazzled by handheld technologies (video games, cell phones) that not even adults could explain how they work. With Electro products, children could emulate professional wireless operators and quickly understand how the core processes worked. In essence, anybody could imagine themselves on the path to becoming a great inventor. In fact, the early Electro products were almost an exact duplication of devices used by radio inventors Gugliemo Marconi and Lee De Forest.

Below are a few advertisements for Electro Importing products advertised in various issues of Popular Mechanics magazine from the 1910s. Although the products were aimed at all radio enthusiasts and in one ad are explicited advertised as ‘not a toy’, their yearly catalogs — as amply illustrated for the cover above — make it clear who their desired audience was ‘every wide-awake American boy’. [source] 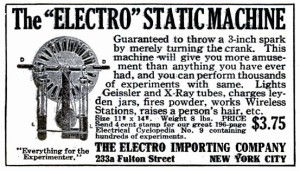 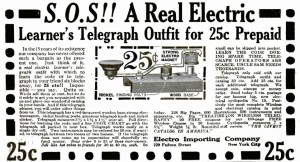 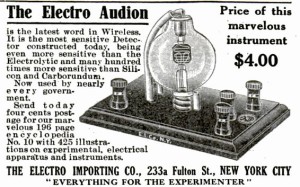 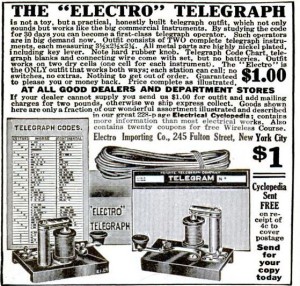 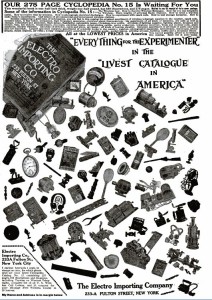 Perhaps this is coincidental, but a few years later, New York’s famed Radio Row soon developed in the neighborhood surrounding the Electro Importing offices. A mere block away, on Cortlandt and Greenwich streets, retailers specializing in home radios sprouted up in the early 1920s. Radio Row soon became the place to buy the latest in home console entertainment.

In the 1960s, the former offices of the Electro Importing Company and all of Radio Row was demolished to make way for the construction of the World Trade Center.

Below: Radio Row in 1936, photo by Berneice Abbott 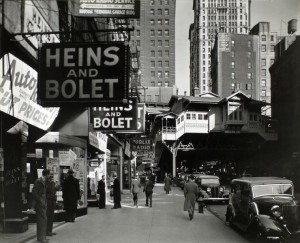