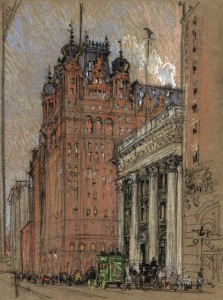 She’s not exactly a Howard Stern or a Robin Quivers, but Anna A. Nevins does deserve to be considered as something of a radio pioneer in New York.

One hundred years ago, ‘wireless telegraphy’ was mostly used to communicate with vessels crossing the Atlantic Ocean. And these weren’t signals with human voices, but rather in the dots and dashes of Morse code. Experiments with sending vocals over the airwaves were already being conducted in New York by Lee De Forest as early as 1907, but radio wouldn’t seriously be considered as a means of voice transmittal for almost another decade.

It was a tool mostly used by the U.S. Navy and commercially by the telegraph companies. It was from the ashes of a De Forest company that the United Wireless Telegraph Company was formed in 1906. It heralded dozens of receiving stations throughout the country and, in particular, three in New York. Their corporate office at 42 Broadway was one, extremely convenient to the offices of the major passenger ship lines of the Cunard (25 Broadway) and the White Star (9 Broadway). They had another out at the luxury hotel spot Manhattan Beach, Brooklyn, where some wealthy New Yorkers spent the summers.

But by far the most notable of these wireless stations in Manhattan was atop the original Waldorf-Astoria, one of the most famous hotels in the world, at 34th Street and Fifth Avenue. (Above: Drawing of the Waldorf-Astoria in 1904 by Joseph Pennell.) From here, operators could send messages to ships hundreds of miles away and even to other cities like Chicago. “The operating room is a model in every respect,” claimed Modern Electrics Magazine in September 1909. “This station without a doubt is the most popular one in New York…. [T]he lofty aerial stretches its wires clear over one side of the famous roof garden.”

Below: the United Wireless telegraph station atop the Waldorf-Astoria Hotel, 1909 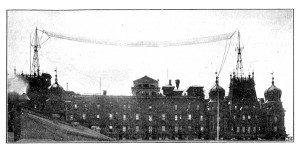 But they had another badge of pride — America’s first female wireless operator. Young Anna A. Nevins, 22 years old, worked eight hours a day at the Waldorf-Astoria station, considered by her colleagues “an expert in wireless instruments” By virtue of her sex, this was a news item in papers across the country in 1909.


It was not entirely shocking to see a women at a telegraph desk, but the newness of wireless technology and challenges of early radio would have made Anna’s skills rather unique. It’s believed she trained under De Forest as early as 1906.


The juicy spin, of course, was romance. According to reports, Nevins had a beau “Jack” on the steamship Oceana (below)), a Hamburg-American line traveling to destinations in the West Indies. The young wireless operator would send ‘messages to her sweetheart’ over the wireless, alleged as far as 1,000 miles away, engaging in an ‘aerial conversation’ believed to be the longest exchange of its kind for the day. (Then again, this sounds like newspaper hyperbole!) 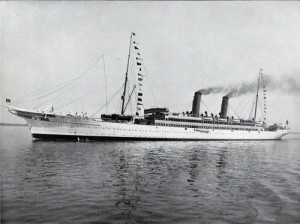 Did reporters seem fascinated to ask about what it was like to be the sole woman working within a new technology? Not when you can ask her about love! In a syndicated article from 1909, she’s quoted as admitting, “Yes I know the young man. When he’s in town, I see him. But almost every day I hear from him.”


The Waldorf station was the jewel in United Wireless’ crown. Unfortunately, United’s reputation as a corrupt company tied to Wall Street shenanigans and perpetually hounded with legal issues caused its demise in 1912, when it was sold to American Marconi. As for Anna, I can’t locate any trace of her after these initial reports. Perhaps she met and married ‘Jack’, whoever he was. Hopefully, years later, she was asked more interesting questions of her career.