EPISODE 102 Today Brighton Beach is known for Brooklyn’s thriving Russian community, while its neighbor Manhattan Beach is calm and family oriented. But over a hundred years ago, these neighborhoods were the homes of giant, lavish hotels catering to the upper classes. While regular folk were playing at Coney Island’s Steeplechase Park, Dreamland and Luna Park, the wealthiest were enjoying ‘the tonic of sea bathing’ at three of the most toniest hotels on the East Coast — Brighton Beach Hotel, the Oriental Hotel and Manhattan Beach Hotel.

Find out the origins of these long-gone resorts and how they make their mark on the current neighborhoods of Brighton Beach and Manhattan Beach.

ALSO: Why should we care so much about one particular raging anti-Semite? And why did the Brighton Beach Hotel, several thousand tons of it, have to get dragged inland 500 feet?

Music in this episode is the “Manhattan Beach March” by John Philip Sousa!

A map of Coney Island from 1879. Click into it to see the detail of the various train and horsecar lines traveling over bridges to the island. The Oriental Hotel was built in 1880 and is thus not listed. (Find the original here.)

The Manhattan Beach Hotel by postcard 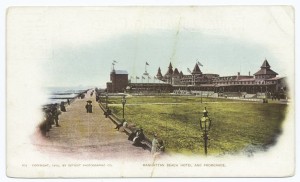 Facing the other way — the boardwalk of the Manhattan Beach hotel. 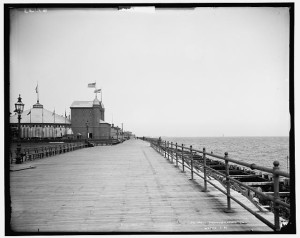 And from the water. The hotel was built in 1877 by railroad financier Austin Corbin. He would later scandalize progressive New Yorkers by prohibiting Jewish guests from staying at the resort. 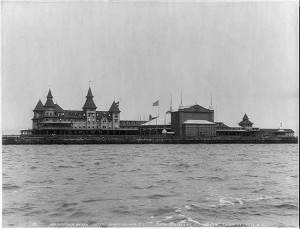 The Oriental Hotel, built in 1880. Click here for another view by George Bradford Brainerd. 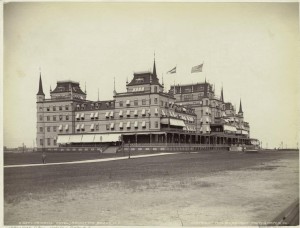 An illustration of the Manhattan Beach Hotel in the foreground, the Oriental in the distance. (Courtesy MMCSL) 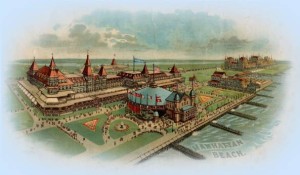 An illustrated train map for the New York and Manhattan Beach Railway, featuring the two Corbin hotels on the flap. (Courtesy LIRR history) 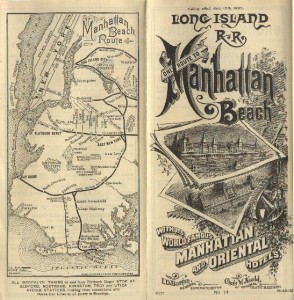 The Brighton Beach Hotel in 1906. Even as millions streamed into Coney Island to enjoy the frenetic rides and attractions, others could relax here, just a few hundred feet away. 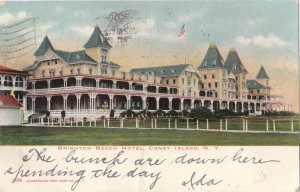 The Brighton Beach was moved — all 6,000 tons of it — in 1888 when the beach in front of it eroded. (Click into pic for better view.) Below it, an illustration of the hotel under siege by the sea. (Courtesy Weather blog) 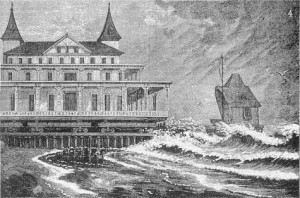 Along today’s Brighton Beach Avenue, you can find a host of shops and restaurants harkening to the tastes of old Russia. 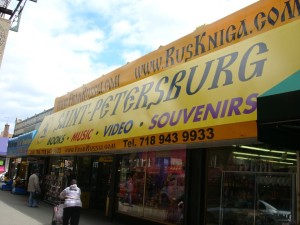 The real fun lies along the boardwalk at night, a string of Russian restaurants and clubs where the action sometimes spills out to the beach. Up the street at Brighton Beach Avenue, you can find The National restaurant, the closest a New Yorkern can come to finding Atlantic City style dinner entertainment. 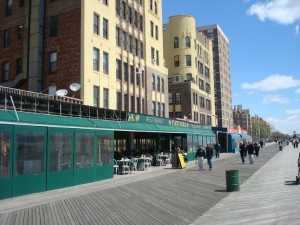 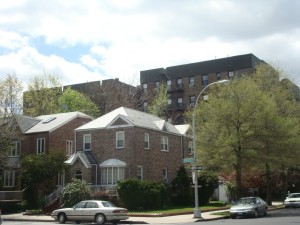 Sheepshead Bay, north of Manhattan Beach, is named for a fish which no longer swims here.

One of my favorite things in all of Brooklyn — the Ocean Avenue footbridge. Originally built in 1880, commissioned by Austin Corbin, the pedestrian bridge links the promenade in Manhattan Beach with the one in the neighborhood of Sheepshead Bay. According to Forgotten New York, Corbin kept closing the bridge, worried about ‘undesirables’ flocking to his precious upper-class hotel. 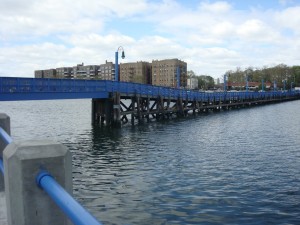 Kingsborough Community College at the far eastern end of the former island. If the college feels a bit like a military barracks, that’s because it was. After Corbin’s hotels were demolished, most of the land went to private home developments. But the far tip went to the Coast Guard and later served as a training base for the United States Maritime Service. 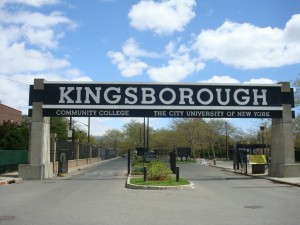 Manhattan Beach Park, a seemingly out of place sandy oasis in the quiet neighborhood of Manhattan Beach, is a remnant of the former resorts. 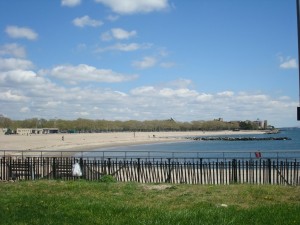 2 replies on “Brighton Beach and Manhattan Beach, at your leisure”

Great stuff. I actually found a rare picture of the interior of the Oriental hotel in an old newspaper. Wish there were more.

I had a friend that I would visit who lived within a few blocks of Manhattan Beach Park and we played tennis there well into November. The sea air there is clean as the Hamptons.