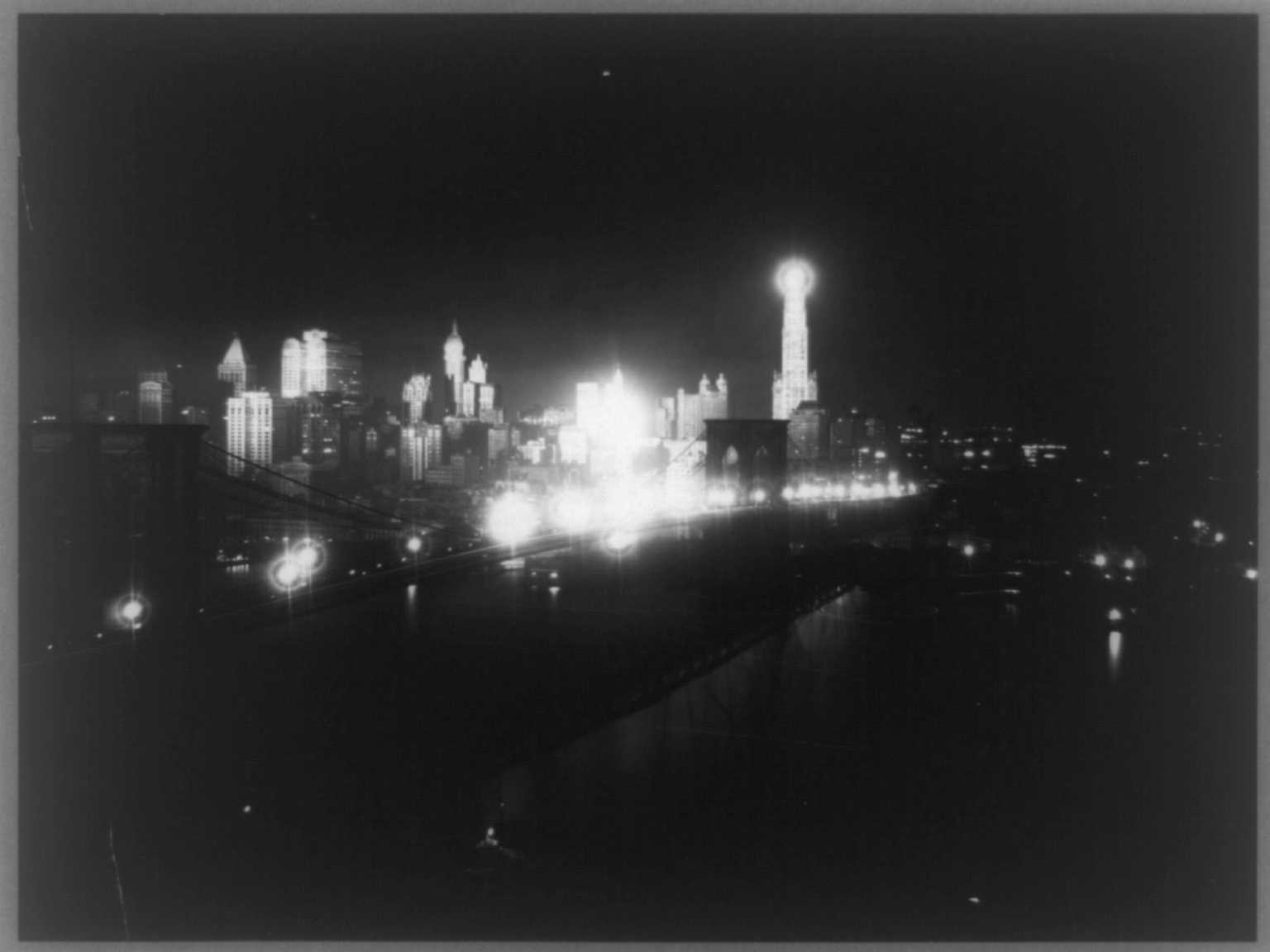 At top — That Gotham glow: The powerful Sperry searchlight drapes the dark city in light. The Woolworth Building is lit up like a candle.

A thin, bright streak of light brushes across the sky and dances off the clouds above. With few buildings over fifteen stories and the city’s electrical lights at a fraction of the intensity that they are today, the white piercing beam would have awakened the night sky, the most powerful illumination in the sky with the exception of the moon.

It was March of 1919, and the device creating this expressionistic Gotham nightscape was the Sperry Searchlight.

Since the first arc lights installed along Broadway in 1880, New Yorkers had grown accustomed to electric light. In fact, Times Square and the stretches of Broadway had become New York’s entertainment capital because of it. But searchlights were still a bit of a novelty, devices more associated with wartime. Innovations in electrical light changed how wars were even fought; combatants in World War I aimed spots to the skies to search for enemy zeppelins and scoured the grounds below for encroaching forces.

New Yorkers would have been used to seeing searchlights atop the city’s newest, tallest buildings. The first New Year’s celebration at One Times Square used a searchlight to blanket stunned crowds below. Both the Flatiron Building and the Metropolitan Life Tower in Madison Square were equipped with searchlights during elections. They were an effective way to present information. For the 1908 presidential election, the New York Herald announced that a searchlight atop the Met Life building would swing north if William Howard Taft won and south if the victory went to William Jennings Bryan. That night, the beam turned north.

But the Sperry Searchlight was different. The powerful device, created in the mid 1910s, was described by a science journal of the day in 1917 as ‘the world’s most powerful searchlight’ and as bright as ‘the fiercest sunlight’. “The heat of its focused beam is so intense that it will set paper afire at a distance of two hundred and fifty feet …. It will burn your skin at three hundred feet.’

This intense searchlight was the product of Brooklyn innovator Elmer Ambrose Sperry, whose greatest invention, the gyrocompass, was quickly adopted by the United States Navy and almost immediately changed sea travel forever.

From the Sperry Gyroscope Company — the ten-floor building still stands at 40 Flatbush Avenue Ext. by the Brooklyn entrance to the Manhattan Bridge — the inventor and his team created a host of new items, many for the military. (Did you know that the Sperry Company created the first airplane autopilot?)

In 1919, one version of his new and improved searchlight made a test run, presumably atop the roof of the Sperry building. If you look at where the building is on a map, you can almost trace the beam from the roof along the line of its projection.

Over the Brooklyn Bridge, bouncing off the first line of buildings along the east of Manhattan, and illuminating three of New York’s tallest and best known buildings of the day — the Singer Building (center left), the Park Row building (center right), and the majestic Woolworth Building (the tallest beacon-like structure, center right).

Images like this one weren’t just documents of technological success. (Although good night photography itself was a pretty nifty trick, even in 1919.) They helped build the mythology of the city, which in 1919 was about to go down the rabbit hole of Art Deco and inspire new architects to populate the skyline with more ambitious and futuristic towers.