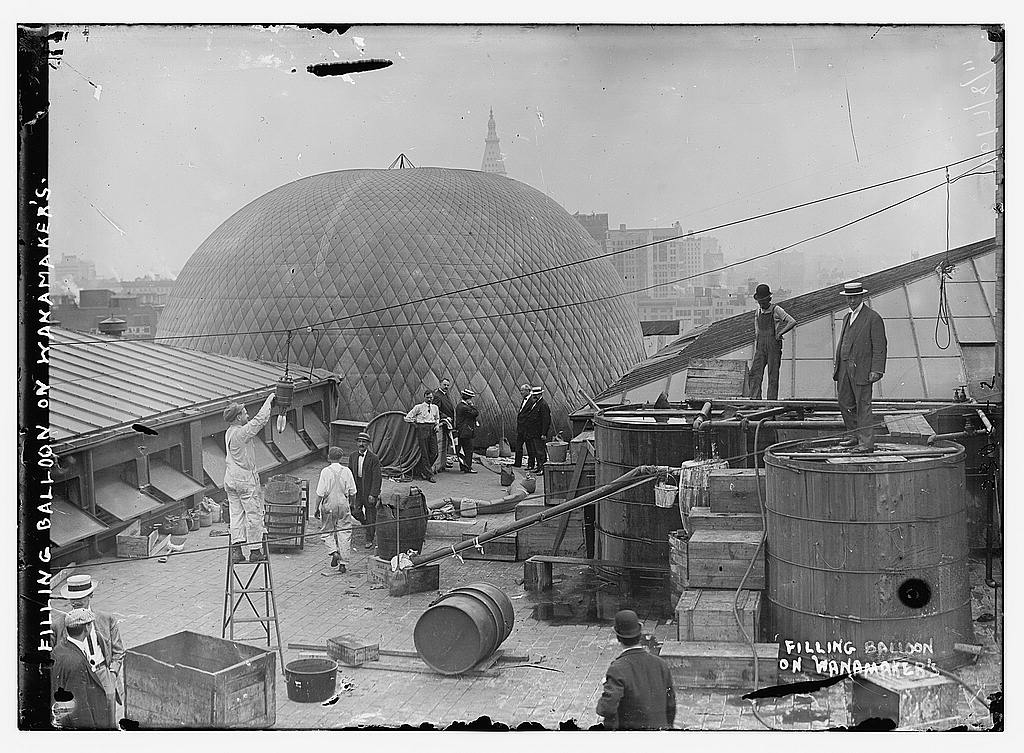 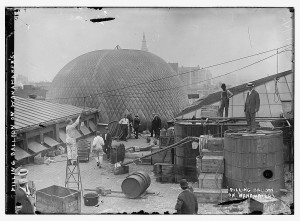 A view of the balloon launch, looking north towards the Metropolitan Life Tower, which can be seen jutting up in the background. The Met Tower was the world’s tallest building in 1911.

Philadelphia retailer John Wanamaker turned an abandoned train station in Philadelphia into the lavish department bearing his name in 1876, just in time for America’s 100th anniversary.  He would become one of Philadelphia’s largest employers, with 5,000 people working in the store, “the most valuable piece of property of its size in the city.” [source]

Meanwhile, in New York City, when shoppers weren’t flocking to Ladies Mile, they headed to A.T Stewart‘s equally grand ‘Iron Palace’ department store in Astor Place, with over thirty departments specializing in every sort of modern necessity, making it one of the largest stores of any kind in America.

[Read about and listen to our podcast episode on the Astor Place Riot of 1849, an event that happened just over 50 years prior.]

Stewart’s store was located on Fourth Avenue between 9th and 10th Streets and was called the ‘Iron Palace’ as it was New York’s largest cast-iron building at the time.  (But not the first; that title goes to its neighbor, the American Bible Society building, at 51 Astor Place.)

Below: The original Wanamaker’s between 9th and 10th Streets. The building no longer exists. 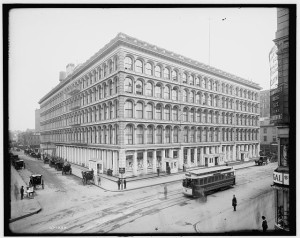 It would take two decades for Wanamaker to make his way to New York, eventually buying up an old Iron Palace in 1896 and reopening it as New York’s first Wanamakers.

But a man who had filled an entire train station in Philadelphia would not simply be content with one lavish store; across the street, between 8th and 9th, he built another in 1902, using one of the world’s most revered architects — Daniel Burnham, who had just completed work on the Flatiron Building.  Customers could go between the buildings using a fanciful ‘bridge of progress’. 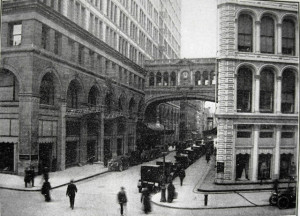 That is all, of course, to set this scene for the curious publicity stunt which occurred on the rooftop of Wanamaker’s on July 8, 1911.  For three days, a large hydrogen balloon (48 feet in diameter) sat tethered upon the rooftop of the new building, filling up with copious amounts of gas for a journey to Philadelphia — with a planned landing near Wanamaker’s other store. 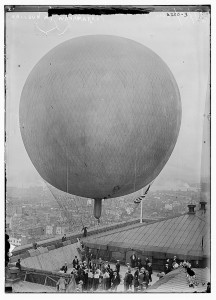 In 1911, that old train-station store would be replaced with a new Wanamaker’s in Philadelphia’s Center City, also built by Burnham.  No better way to grab headlines for his new store in Philadelphia than to float a gigantic eye-catching object from one store to the other!

The balloon (called the Wanamaker No. 1), imported from Paris, was launched at 6 pm and gracefully floated over the city, across the Hudson, fadeing into the mists of Weehawken.

Unfortunately for the balloon’s two pilots, things went immediately awry, the balloon being a tricky one to control.  Instead of floating southwest, it headed due north.  After an hour and a half of wandering blindly through the clouds, the balloon ungraciously came down — in Nyack, New York.

But it wasn’t considered a failure by any means. Wanamaker’s wanted a publicity stunt and got one.  The launch made the front page of newspapers.  For a moment, the whole region seemed transfixed.  “Crowds turned out to gaze at the big airship as it passed over the Hudson River villages,” crowed the New York Times.

Some even claimed this was the beginning of a new phase in New York travel.  Rooftops could regularly be used to launch airships of all sorts.  “This is the first step towards making the roofs of the Wanamaker buildings in New York and Philadelphia into permanent aerial stations,” claimed the Evening World.  “Landing platforms and hangars for balloons and aeroplanes are to be built on the roofs of the department stores in both cities.”

Not to be outdone, the following month, Gimbels Department Store would stage a marvelous airplane race over the streets of Manhattan.

By the way, Mr. Wanamaker wasn’t even in the country when all this happened.  He rolled into town the following week aboard the White Star liner Oceanic, having celebrated his 73rd birthday in style by traveling to England and meeting King George and Queen Mary.

The original Wanamaker’s building is no longer there, but the south building, the one designed by Burnham and the one from which the balloon was launched, still exists today as the home of K-Mart.

Below: That same week, one could run into the store below the balloon and purchase this swell Victrola. This ad is from the July 10, 1911 issue of the Evening World 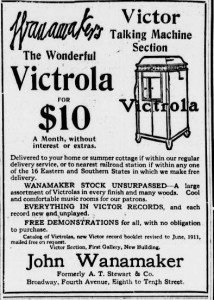 Pictures courtesy the Library of Congress.