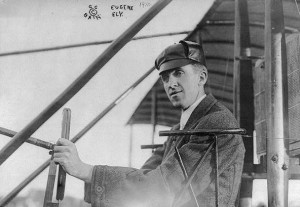 The place to be one hundred years ago today was Greeley Square, that bustling public space just south of 34th Street from Herald Square. Thousands of people crowded the sidewalks outside the department stores that afternoon, and many hundreds more shoved themselves into the elevated subway station.

These crowds were centered around Gimbels department store at 33rd and Broadway, but nobody was there to look for bargains. No, they were simply looking up.

Below: Gimbels store on 33rd Street. Today the building houses the Manhattan Mall, but you can still see vestiges of the old store in its copper green traverse. Courtesy the CUNY archive. 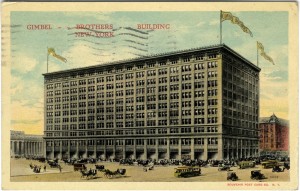 Imagine a century ago when air flight was so novel that just the sight of a plane zipping through the heavens could elicit shock and amazement. Now imagine three aeroplanes racing across the sky, right over your head. Most buildings in midtown Manhattan were no more than a few stories tall in 1911, allowing crowds an unencumbered view of something historic.

In the early days of flight, pilots were often driven by cash rewards. The Gimbels Brothers, the chief rival of Macy’s department store across the street, had opened their new emporium here at 33rd Street just the year before. As a publicity stunt, they offered $5,000 to the pilot who could fly between their New York store and their Philadelphia location the fastest.

Three airmen took up the offer: Hugh Robinson, a young engineer working for early aviation pioneer Glenn Curtiss; Lincoln Beachey, a stunt flyer known for his dapper fashion sense, and another pilot, Charles Hamilton. On the morning of August 4th, 1911, the three pilots headed to the busiest air field in New York — Governor’s Island — to prep their new flying machines.

The Gimbels were not the only ones benefiting from publicity that day. All three men would be flying crafts made by Curtiss, who never missed a chance to grab headlines from his bitter rivals, the Wright Brothers. But as flight time approached, the skies above New York appeared overcast, and Hamilton — fearful of flying a new craft in windy conditions — dropped out. No matter! On hand to replace him was faithful Curtiss flyer Eugene Ely. (He’s the one pictured at top, pictured in 1911, photo courtesy LOC.)

At 2:30 that afternoon, the three planes lifted off from Governor’s Island and headed over Manhattan. All over the city, New Yorkers craned their necks to stare at the three specks streaking over the sky. According to the Evening World, “Every window of every hotel and office building which opened towards the route of the flyers were full of faces.” The best seats in the city were atop the Gimbels building itself, where VIPs sipped liquid refreshment and fanned themselves as studious members from the Aero Club of America timed the competitors.

The three planes flew over Manhattan then circled the Gimbels store, to the delight of the crowds, before heading off over the Hudson River and into New Jersey. 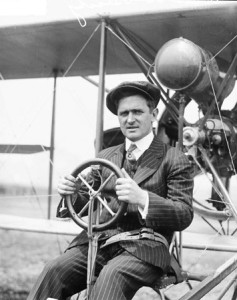 Only two planes made it to Philadelphia that day. At one point, Beachey (pictured at right, impeccably dressed) landed his craft in Trenton, becoming momentarily disoriented. He quickly made it back up in the air. Robinson ran out of gas around Princeton Junction; luckily for him, some cheerful motorists sped into town and retrieved additional fuel for the pilot. Robinson was back up in the air in less than 20 minutes.

Eugene Ely, the replacement derring-do, wasn’t as lucky. Having flown dangerously within feet of Beachey, Ely’s fuel tank began to leak, and he was forced out of the sky.

The remaining two air crafts arrived in Philly a little over two hours after leaving Governor’s Island. It was raining, but the enthusiastic crowds still filled the streets. Lincoln Beachey got there first, encircling Philadelphia City Hall and the statue of William Penn before flying past the Gimbels store and landing in Fairmount Park. Robinson was close behind and both pilots “were drenched to the skin, having passed through thundershowers between Trenton, NJ, and Philadelphia.” [source]

Great story, never heard about that before. You guys do a terrific job documenting the history of the city for the rest of us. Thanks.