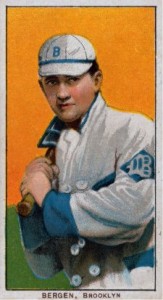 The New York Times this morning had an intriguing story about a unfortunate fellow who plays for the Chicago White Sox named Adam Dunn — nicknamed ‘the Big Donkey’.  This has been a banner year for Mr. Dunn as he is about to make the list as one of the worst players in the history of the sport.

It’s that list that brings the story back to New York. Dunn has a current batting average of .165. For you complete novices, that the number of hits Dunn has scored divided by the number of times he’s been at bat. (Ed.: I’m obviously one of those novices. Check the notes below for a clearer definition.) That is roughly my batting average when I played for my church softball team when I was nine years old.

According to writer Sam Borden, “a number like .165 will put his name in the record books for the lowest single-season batting average by an everyday player since 1909, when Bill Bergen, a catcher, hit .139 for the Brooklyn Superbas.” With a basic average of almost 9 outs for every 10 at-bats, who is this Bill Bergen and why was he allowed to play at all?

The history of baseball would be nothing without Brooklyn. Not only were some of the first leagues formed in the former independent city, but perhaps the sport’s most legendary team (the Brooklyn Dodgers) played here at Ebbets Field. The first enclosed ballfield, the Union Grounds, was built in 1862 in today’s Williamsburg.

Brooklyn’s first professional National League team in the 1890s went by many unofficial names. At one point, they were called the Brooklyn Bridegrooms — not the most rousing name — then the Brooklyn Robins. By the time Brooklyn consolidated with New York in 1898, the team received a new nickname, and from a surprising source.

A couple weeks ago I wrote about the daredevil vaudevillian acrobats the Hanlon Brothers, known for extraordinary feats of human agility mixed into theatrical extravaganzas. They made their debut at Niblo’s Garden in 1858, and fifty years later, their sons were still carrying on the tradition of thrilling audiences with their mix of fantasy, theater and gymnastics.

In the 1890s, the Hanlon sons focused their energies on two popular traveling variety shows, elaborate productions akin to a stadium rock show, often employing revolving stages, costumed casts, and sophisticated harnesses and props. The first, Fantasma!, would later be the subject of Thomas Edison’s early films. Their second, Superba!, would accidentally inspire the world of baseball.

In 1899, scrappy baseball superstar Ned Hanlon — who made his career in the 1880s in Cleveland and Pittsburgh — moved to Brooklyn to manage the then-named Brooklyn Bridegrooms.  Ned Hanlon was not related to the flamboyant Hanlon brothers in any way.  However, simply by confusion or a cheeky name-play by journalists, the team was soon called the Brooklyn Superbas, borrowing the title of the popular theatrical show. (You pronounce it the Su-PER-bas.)  The name stuck until the early 1910s, when the borough’s primary form of transportation inspired another nickname — the Trolley Dodgers, soon shortened to just the Brooklyn Dodgers. 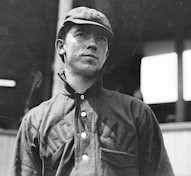 Bill Bergen (at left), the man with the lowest batting average in professional baseball history, was a catcher for the Brooklyn team during much of its Superbas era. Bill was a superb catcher — in fact, still considered one of the best by baseball historians — but a lousy batter. In 1909, he set that rather infamous batting average, and over the course of his entire eleven year career, he hit just two home runs.

Let us not criticize Bergen too harshly. Several years earlier, his big brother Marty Bergen, also a baseball star, suffered from devastating mental issues. In 1900, Marty murdered his own wife and kids with an axe, before taking his own life with a straight razor. That certainly makes a crappy batting average seem rather trivial.

And no, Brooklyn did not name its Bergen Street — which runs a dozen blocks north of Ebbets Field — after this early baseball star. The name of that lovely street has a far older history.

3 replies on “Brooklyn baseball: the Superbas and the worst batter ever”

…Dunn has a current batting average of .165. For you complete novices, that the number of hits Dunn has scored at bat divided by the number of times he’s been struck out.

Actually, a batting average is the number of hits a batter gets divided by the number of at bats that batter has. Incidentally, a walk does not count as an at bat.

Actually it is the number of hits Dunn has had, divided by the total number of official at bats (for example a batter is not charged with an at bat if he walks or sacrifice bunts.

Ack, yes my original definition was massively wrong! Thanks for the clarification, guys.