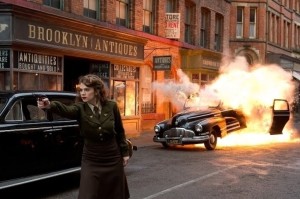 A 1940s antique store carries more than dusty lamps in the summer superhero film, ‘Captain America: The First Avenger,” which transplants its hero’s origins from the Lower East Side to downtown Brooklyn.

I know I can be a bit fanatic in my New York-centeredness, but this statement I can make with fact — the comic book industry was born in New York City. One of the earliest publishers, George Delacorte (familiar to visitors at the Central Park Zoo), founded Dell Publishing in 1921, producing pulp magazines and, eventually, comic strip collections. The publishing precursors to both DC and Marvel Comics got quiet starts in small offices in New York, and both slowly grew to dominate and define the superhero universe.

More importantly, several key comic artists and writers found inspiration in the city. Bob Kane and Bill Finger, the creators of Batman, and the hero’s first artist Jerry Robinson cooked up the character in the Bronx. Martin Nodell dreamt up the Green Lantern from inspiration found at a 34th Street subway station. A bespeckled boy from Brooklyn, Gardner Fox, ditched a law career for a typewriter where he created The Flash.

None are perhaps as famous as Stan Lee, born on the Upper West Side, and the father and co-creator of an entire stable of Marvel Comics’ classics, including Spider-Man, Iron Man and the Hulk. And one of comics’ most influential artists, Jack Kirby, was born and raised in the tenements of the Lower East Side. 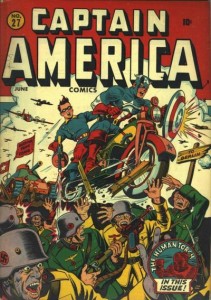 At the start of World War II, Kirby met writer Joe Simon, a photo retoucher living in Morningside Heights, and the two found success in creating a host of classic comic creations. Chief among them was the patriotic themed Captain America. Steve Rogers, a meek young illustrator, wants to fight for his country but suffers from classic comic-book weakling syndrome. A government experiment grants Rogers superhuman powers and a flamboyantly bright uniform, the better to fight Nazi and various supervillians.

Now, after all that set up about New York’s importance to comic-book creation, Rogers actually represents the top of a rarer class — superheroes who are actually born in New York City, according to their origin tales. Rogers, much like his creator Kirby, is from the Lower East Side.

In the new movie, “Captain America: The First Avenger,” the creators have transplanted the origin of the hero — as well as his sidekick Bucky — to Brooklyn*. Not only is Rogers from the mean streets of downtown Brooklyn, but the Army has a super-secret laboratory hidden within a dusty old antique store. (Talk about adding some pizazz to the Fulton Street Mall!)

In the film, 1940s Brooklyn is actually played by Manchester, England, and quite well in my opinion. But it does beg a question — in the various fictional comic book realms, how many superheroes are actual New Yorkers?

The first place to look is amongst the roster of Marvel Comics heroes. DC Comics originally set many of its tales in fictional cities — Metropolis, Gotham City, Keystone City, Star City — and many of its greatest characters are from otherworldly locations (Krypton, Mars, the island of Themyscira). Lee’s philosophy with the creation of Marvel Comics was to root heroes in realistic places and problems, a reaction to DC’s fantastical remove.

The Lower East Side’s Captain America was inherited by Marvel in the early ’60s, but the company created many of its own local heroes. A small sampling includes: 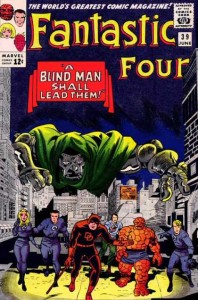 — Another Lower East Side native was scrappy young Benjamin Grimm. He befriended Columbia University college student Reed Richards, who had fallen in love with Long Island girl Sue Storm. Along with Sue’s brother Johnny, the quartet were bathed in cosmic rays to become the Fantastic Four, who donned fabulous blue costumes and set up headquarters in midtown Manhattan at the Baxter Building, overlooking Grand Central. (By the way, Tony Stark, aka Iron Man, is also a Long Island native.)

— Meanwhile, over in Hell’s Kitchen, more radiation — how is it safe to live here?! — blinds the son of a noted boxer who is later killed by gangsters. (I haven’t seen the original issue, but I’m guessing he fought at Madison Square Garden, located in Hell’s Kitchen in the 1960s.) That child, Matthew Murdock, grows up to develop extra-sensory powers and a taste for red spandex, as the Daredevil.

— I’m imagining that young Daniel Rand grew up on the Upper East Side somewhere when his wealthy father took him to the mystical disappearing city of K’un L’un, where Rand develops superhuman martial arts abilities and renames himself Iron Fist. Back in 1970s New York, quite naturally he pairs with Harlem gangster-turned-dogooder Luke Cage. Occasionally, the duo run into that Brooklyn-born hothead Ghost Rider.

— Then there’s that constant reminder of the dark, crime-infested side of 1970s New York with the vigilante called The Punisher, avenging the death of his family in Central Park at the hands of a bloodthirsty mob boss. 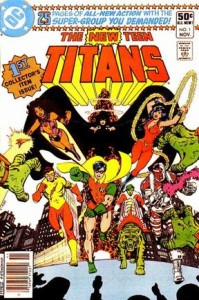 By the late 1970s, there were at least a good couple dozen superheroes flying over the heads of New Yorkers. And other heroes from other comic companies soon joined them. DC Comics saw the benefit in entering the world of actual cities by the early 80s. The popular Teen Titans housed their curious T-shaped headquarters on an unnamed island in the East River. In the alternate universe inhabited by the Watchmen, this team not only watched over the city, one of them eventually destroyed it!

By the mid-’80s, independent publishers began to creep into territory dominated by DC and Marvel, presenting starker, edgier tales. The most successful of these, the Teenage Mutant Ninja Turtles, were characters literally born in the New York sewer system. The comic itself, however, was created in Massachusetts.

With the development of companies like Dark Horse and Image, the modern comic book industry has developed far afield of New York.  But just in case all of New York’s caped crusaders are otherwise engaged, we always have Professor Xavier’s School for Gifted Youngsters — the headquarters for the X-Men — just up in Westchester County!

*Apparently, Steve Rogers actually does moves to Brooklyn at some point in his long career. Red Hook, in fact! Perhaps they sell one of those nifty shields at IKEA…

The Marvel Universe Map of NYC, (circa 1985, at least.) Just prior to that in my photostream are comparative photos of 4 important Marvel locations (The Baxter Building, Avengers Mansion, The Daily Bugle and Dr. Strange’s home) and what is really at those addresses.

Wow, that map deserves a frame. It even lists the home of the Thing’s blind girlfriend. Thorough! Thank you for sharing it….

Comic books are quintessential to New York City’s pop culture history. We love how the city skyline plays into the scenery and backdrop of so many great comics. @Cully that map is fabulous…thanks for sharing the link!