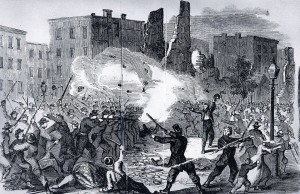 The New York draft riots of 1863 were both a distraction to the actual battles of the Civil War and the purest embodiment of underlying Northern viewpoints, violently displayed. Producing this show was not a lighthearted task, and we clearly needed to check our usual conversational demeanor at the door. Hopefully we presented the riots in a believable and respectful manner.

The other draft riots: Given the New York-centric nature of our program, I should note that draft riots occurred throughout the North that week, and even earlier. Yet none were of the intensity as those that occurred in Manhattan. In Boston, for instance, mobs stormed the famous Faneuil Marketplace and an armory on Cooper Street. But troops quelled the violence early, and only eight people died. [Read more about this even in the Boston Phoenix.]

And events were sparked in the future boroughs of Brooklyn, the Bronx, Queens and Staten Island as well. You can read more about them in this blog post.

Morbid misspeak: Thankfully I said the phrase ‘Invalid Corps.’ correctly twice before mis-pronouncing it a final time where I say ‘invalid corpse’. Ick. And, to my ears anyway, it appears I said ‘a computation fee’ instead of a ‘commutation fee’, but the context should have made the mis-statement obvious. Did I mention we were recording this without air conditioning?

Further Reading: For more information on the Draft Riots, you can turn to several sources, based on your level of interest. My favorite is Barnet Schecter’s ‘The Devil’s Own Work’ which gives a gripping chronological retelling of events. He really manages to tame a chaotic tale in a way that neither confuses nor oversimplifies. I used Schecter’s ‘Mrs. Hilton’ anecdote from this book, and his book is chockful of other individual tales like that one.

If you prefer something a bit more analytical, there’s Iver Bernstein’s ‘The New York City Draft Riots’ which tries to parse who exactly the rioters were. Of course ‘Gotham’ by Edwin G Burrows and Mike Wallace have a nice, compact recount with plenty of context. The City University of New York’s ‘Virtual New York’ web resource has a timeline with maps.

The Gangs of New York: Perhaps the most famous depiction of the riots occurs in Herbert Asbury’s classic ‘The Gangs of New York’. The film version, directed by Martin Scorsese, takes quite a few liberties with the facts of course. The placing of candles in windowsills and the fire at Barnum’s American Museum, for instance, did not happen during the riots. But those are based on true events that happened in New York a year later. We’ll cover those events in our next show.

Next Podcast: Due to some scheduled vacation time and an upcoming apartment move for myself, the last entry in our Bowery Boys Go To War! series will be available on August 26. If the sober tone and raw nature of this current show bummed you out, don’t worry — humor as well as some genuine oddness returns with the next one!

Image above courtesy Library of Congress

Fascinating. Is there, I wonder, any physical evidence left of the riots?