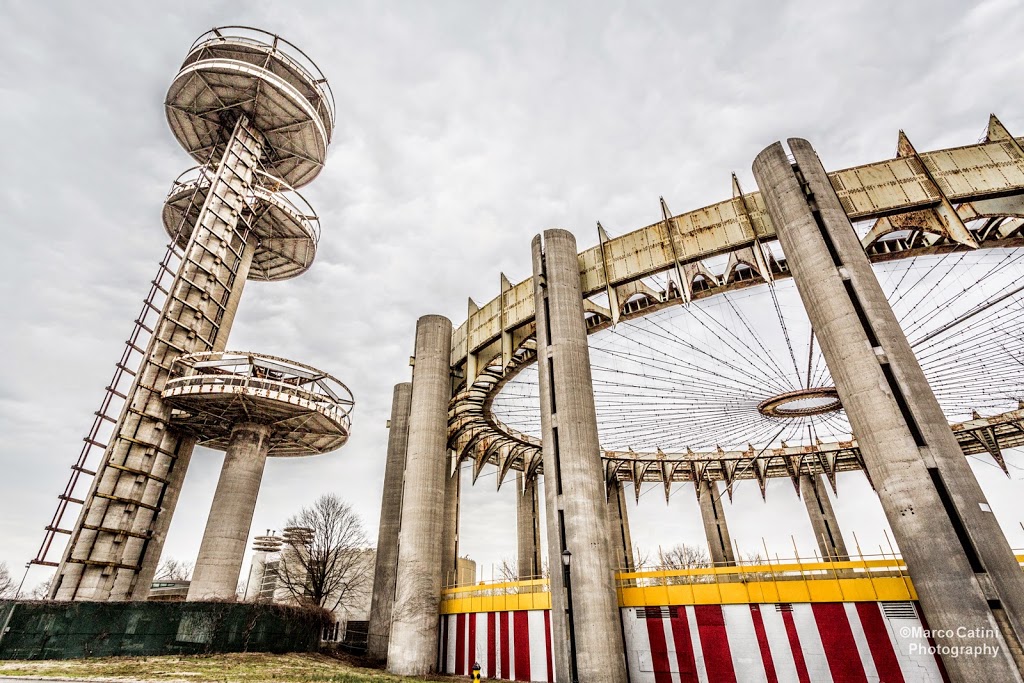 PODCAST The ruins of the New York State Pavilion, highlight of the 1964-65 World’s Fair in Flushing Meadows-Corona Park, have become a kind of unofficial Statue of Liberty of Queens, greeting people as they head to and from LaGuardia and JFK airports.  Its abandoned saucer-like observation decks and steel arena have inspired generations of New Yorkers who have grown up with this oddity on the horizon.

The Pavilion holds a great many surprises, and its best days may be yet to come.  Designed by modernist icon Philip Johnson, the Pavilion was saved from the fate of many of the venues in the World’s Fair. But it’s only been used sporadically over the past 50 or so years, and the fear of further deterioration is always present.

For the first part of this very special episode of the Bowery Boys, I take you through the pavilion’s presence in the World’s Fair, a kaleidoscopic attraction that extolled the greatness of the state of New York.  In its first year, however, a battle over controversial artwork was waged, pitting Robert Moses and Nelson Rockefeller against the hottest artist of the day — Andy Warhol. Other controversies at the Fair threatened to derail the message behind its slogan ‘Peace Through Understanding’.

In the show’s second half, I head out to record at the Queens Theater — the only part of the New York State Pavilion that’s been rehabilitated — to explore the venue’s ‘lonely years’ with filmmaker Matthew Silva, a co-founder of People For The Pavilion, an organization that’s successfully bringing attention to this weird little treasure.  Matthew gives us the scoop of the pavilion’s later years, culled from some of his interviews in the film Modern Ruin: A World’s Fair Pavilion.

This is crucial time in the history of this spectacular relic. With public attention at an all time high, we may now be at the right time to re-purpose the Pavilion into a new destination for New Yorkers. What do you think should be done with the New York State Pavilion?

An airplane passes over the park, its shadow captured inside the Pavilion. (Photo by George Garrigues)

Modern Ruin: A World’s Fair Pavilion – Promo I from Matthew Silva on Vimeo.

Thank you Matthew for helping out with the show this week!  He’s finishing his film.  If you would like to help out, go over to the Modern Ruin GoFundMe page and donate.  You just be helping out the film, but the Pavilion itself.  The film will probably be the first time many people ever hear of the New York State Pavilion.

And for a different (fictional) film take on the Pavilion, try out these appearances from The Wiz, Men In Black and Iron Man 2:

And thank you to commenter Signed D.C. who points out that the venue was featured in an music video by They Might Be Giants who, generally speaking, who a bit obsessed with the World’s Fair. (It pops up in several of their songs, including a lyric to their song “Ana Ng.“) At one point, the lead singer floats over the Texaco map.

A close up of Long Island, photo taken in 1964.  (Courtesy Flickr/Susan DeMark)

An overhead shot of Philip Johnson’s extraordinary rooftop, a stunning colorful ovoid that projected a rainbow of colors down upon fair-goers.(Courtesy AP)

Theaterama, part of the New York State Pavilion, is today’s Queens Theater.  Johnson commissioned the work of several pop artists to hang along the walls of the pavilion. (Courtesy Bill Cotter/World’s Fair Community)

A view of Theaterama showing the Roy Lichtenstein mural upon its side (Courtesy Jon Buono):

Andy Warhol‘s Ten Wanted Men on the side of Theaterama, with the Tent of Tomorrow in the background.  Although we can almost guarantee that it was not beloved by Robert Moses, it’s believed it was taken down because of Governor Rockefeller.

Robert Moses beams from the sidewalk of Flushing Meadows-Corona Park.  The mosaic is based on the work of Andy Warhol.

The Federal Pavilion — “the square donut on stilts” — was designed by Charles Luckman, who also designed the current Madison Square Garden.

The photographer Marco Catini has taken some recent images of the Pavilion.  You can find much more of his work here. Thanks Marco for letting me use your work here!

Here are a few of my photos taken on the afternoon of recording.  The New York State Pavilion Paint Project is responsible for keeping the place is festive shape. The candy stripes are similar to the look of the 1964 pavilion.

MY THANKS AND GRATITUDE to the Queens Theatre in The Park for allowing us to record in the cabaret room!  I know we went on and on about the observation desks and the Tent of Tomorrow, but you should really check out a show within the greatly renovated theater.  Coming in December: Charles Dickens’ A Christmas Carol!

Visit the People For The Pavilion website for more information on upcoming events, news and fund-raisers. And a shout-out to the organization’s co-founder Salmaan Khan!

The New York Daily News just yesterday published an article about People For the Pavilion and its co-founder Christian Doran who passed away in February. There’s a fund-raiser tomorrow in his honor. [More info here]

ALSO: I didn’t get to plug this on the show, but historian Christian Kellberg has just released a book of photography of the New York State Pavilion, part of the Images of America series.  Most of the pictures are exclusive to this book including some extraordinary shots of the pavilion construction.

And of course there’s Joseph Tirella‘s terrific book Tomorrow-Land: The 1964-65 World’s Fair and the Transformation of America, putting the entire fair within context of the rapidly changing America of the 1960s.

And since I mentioned it on the show, here’s a link for Robert Caro‘s The Power Broker as well!