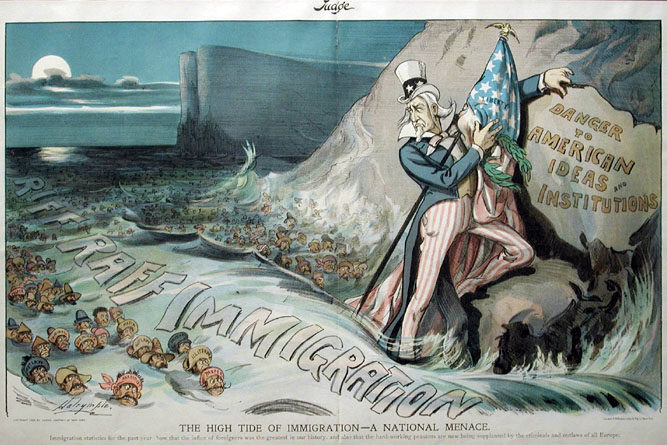 Eugenics, as with any creation from a mad scientist, was developed to advance the human race, built from the studies of Charles Darwin and Gregor Mendel. Shouldn’t we pass only mankind’s most laudable attributes to the next generation? Who wouldn‘t want to weed out disease and deformity?

Instead, it became one of the most insidious tools of the 20th century, a faulty science employed to punish individuals outside the norm and a sinister implement used by Nazi Germany in some of their greatest crimes.

And it was developed largely thanks to the contributions of several of New York’s leading citizens and institutions.

THE GUARDED GATE
Bigotry, Eugenics, and the Law That Kept Two Generations of Jews, Italians and Other European Immigrants Out of America
by Daniel Okrent
Scribner

Daniel Okrent, author of Last Call (on American Prohibition) and Great Fortune (about Rockefeller Center), has produced his most vivid, most intense history yet, a look at the moment where the eugenics ‘craze’ meets the anti-immigration movement.

The location at the heart of the crisis was Ellis Island, which by the 1890s was processing thousands of immigrants everyday from Italy and Eastern Europe, people deemed inferior in the eyes of bigots from conservative Boston elites to racists in the post-Reconstruction Era South.

But such a large number of those immigrants initially settled within New York City that it’s not surprising that the most embittered protests came from the city. (Okrent’s book isn’t about New Yorkers per se but they happen to make up most of the cast.)

And that eugenics, a tool of ‘selective breeding’ already cruelly aimed at society’s most ‘feeble-minded’, would be brandished by those who wished to label whole ethnic populations as inferior.

Much has been made of Margaret Sanger‘s emphatic support of eugenics; so eager was she to promote birth control as an essential right of women that she latched her wagon to a most insidious cause. But many prominent New Yorkers believed eugenics was an enlightened path.

Both widowed heiress Mary Harriman (of Harriman State Park) and the Carnegie Institution funded the eugenics work of Charles Benedict Davenport (whose brother was the director of a Brooklyn settlement house) out in Cold Springs Harbor Laboratory.

The American Museum of Natural History, which Okrent calls ‘the home stadium for the eugenics movement’, was home to eugenics’ most ardent cheerleader (Henry Fairfield Osborn) and its most prominent critic (Frank Boas).

Okrent also reveals that Charles Scribner’s Sons, the actual publisher of Okrent’s book, was the de facto in-house publisher for the eugenics cause. In 1916, they published The Passing of the Great Race by Fifth Avenue blue blood Madison Grant, who popularized the phrase ‘the Nordic race’.

By the early 1920s, the anti-immigrant forces would declare victory. Thousands were abruptly turned away from American shores, families forever separated by newly enshrined quotas.

In 1900, eugenics was thought to be a precise way to curb human deficiencies from the ‘germplasm’, in itself a dangerous and wicked pursuit. In the hands of racists and bigots, it would serve as an inspiration for genocide.

Okrent, one of America’s greatest non-fiction authors, uses his sardonic voice wisely here, enlivening long passages of horrible human thought with bursts of caustic (and, on occasion, bitterly amusing) commentary. He delivers one of the most important history books of 2019.