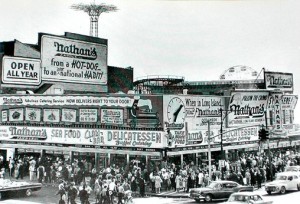 If human beings doing harm to their bodies by shoveling bread and meat down their throats disturb you, stay away from Coney Island and don’t turn on ESPN at noon on July 4th. Because the Nathan’s Hot Dog Eat Contest is back for its 93rd year.

Ninety-three years. Most human beings don’t live that long (especially if they’ve been in the contest).

When Nathan Handwerker began his own hot dog stand in Coney Island, he cooked up some very elaborate schemes to get people to buy his products. He hired doctors (or actually, homeless people dressed as doctors) to stand around eat hot dogs, promoting their health. His son Murray once unfortunately placed a dead finback whale in front of the stand to promote business — which was brisk, until the whale started to decompose.

But no stunt has been as successful as the first — the annual hot dog eating contest. There are literally been people eating dozens of dogs for sport since Nathan’s very first Fourth of July. As the official story goes, a group of newly arrived “European immigrants” were arguing with each about who was more patriotic to their new country. They decided to best each other in a contest eating that most American of new foods, the hot dogs. In the end, Ireland won; a man named James Mullen finished the competition shoveling down thirteen dogs in twelve minutes. 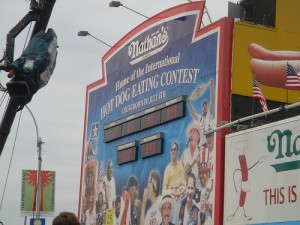 Ninety-two years later, the four reigning champ from Japan Takeru Kobayashi ate over four and a half times that amount (63 in 12 minutes). I love Nathan’s hot dogs, but I couldn’t eat 63 of them in one week, much less 12 minutes.

And he didn’t even win! Last years winner was the food-named Joey Chestnut, who threw down 66 hot dogs. Incidentally, Chestnut has also competed in food eating competition involving Waffle House waffles, Krystal Burgers, chicken wings, and even a gallon of milk.

At least it might be worth it this year; in 2007, for the first time, cash prizes were awarded, including $10,000 for the winner. But back in the 1970s, the winner of the competition received a less interesting prize — a book of coupons good for 40 more hot dogs.

Winners receive the coveted yellow mustard belt. But would it actually fit around their waists after such a competition? 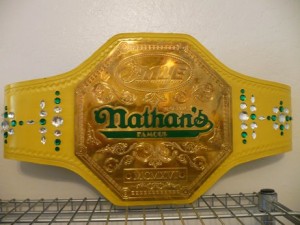 1 reply on “Coney Island’s famous assault on the stomach returns!”

I am lucky (?) enough to own a 1960s Nathan’s official hot dog cookbook, which has the most bizarre recipe ideas in it you can imagine. Hot dogs in everything!