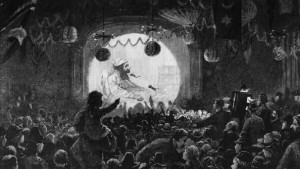 Above: a 1889 image of a typical magic lantern show, this particular one from London. At Riis’ shows, he would stand next to the images, providing thrilling narration

Jacob Riis changed the world with “How The Other Half Lives.” By using the new technology of flash photography, Riis was able to capture the squalid conditions of Manhattan tenements in a way no mere paragraph, drawing or sermon could.

The startling photographs contained in this book did not originate there, however. Riis debuted them — and would continue to exhibit them — in “magic lantern” lectures, essentially the first slide shows. But calling them magic lanterns is far more exciting, don’t you think? Wouldn’t you have gone to class a lot more had you known your professor was lighting up the magic lantern?

The magic lantern’s “real” name, the stereopticon, used a succession of glass slides (as few synthetic, transparent materials were not available at the time) transposed with a negative image that could be projected onto a hanging sheet.*

The magic lantern was created in the 1840s in Philadelphia and was originally intended for entertainment. In fact, one of Riis’s first schemes in New York used the magic lantern in a rather clever way. He and a business partner would set up a stereopticon in a public park — a precursor to the Bryant Park film series — and project images of attractive people and international public landmarks, interspersing the pictures with advertisements from businesses nearby. 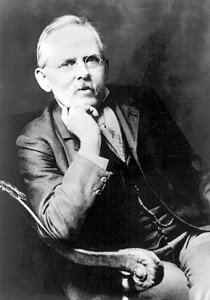 By 1888, however, Riis (pictured right) was using the technology to display the devastating images he had taken in the various slums around town. His first show was to the New York Society of Amateur Photographers, giving a vivid account according to some sources. “Mr. Riis was so ingenious in describing the scenes and brought to his task .. a vein of humor,” according to a newspaper account quoted in Tyler Anbinder’s book Five Points.

Riis eventually took his ‘illustrated lectures’ on the road, electrifying audiences both taken with the modern marvel of the magic lantern and the images captured by the newly developed flash photography. “His viewers moaned, shuddered, fainted and even talked to the photographs he projected, reacting to the slides not as images but as a virtual reality that transported the new York slum world directly into the lecture hall.”

In essence, Riis was giving the equivalent of a show-stopping IMAX show to illuminate the plight of New York’s poorest and the unsafe conditions of their tenements. His shows could be considered the prototype of the film documentary. The presentations would come with fiery speeches by Riis, often using the rhetoric of religious sermons in service of a more progressive, social cause. The shows were so successful that Riis grabbed a book deal and in 1890, his lectures and photographs were contained in his masterpiece “How The Other Half Lives.”

Interest in the magic lantern hasn’t waned today; in fact there’s a national organization that still revels in the wonder of the projected still image.

By the way, you can still find Jacob Riis all over the city. There are the Jacob Riis Houses on East 10th Street and Avenue D, built in 1949 on the site of a clump of tenements Riis railed on about, as well as the Jacob Riis Settlement House in western Queens and high school in the Lower East Side. And of course, there’s a huge Robert Moses park in Far Rockaway named for him.

Below: a home on Bleeker Street (at Mercer and Greene streets), a Jacob Riis image that certainly must have popped up in one of his magic lantern shows 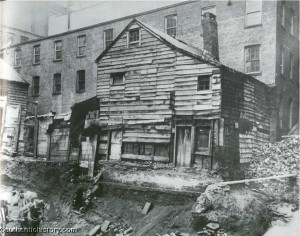