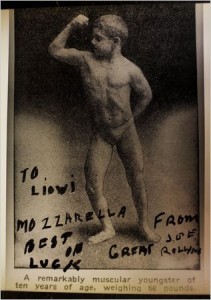 So, I’ve been doing all these stories for the new year on what life was like in New York one hundred years ago, 1910. Today we hear a tragic story about a man who was actually alive for all of it — Joe Rollino, a 104-year-old Brooklyn native and a former Coney Island strongman who was struck down by a mini-van in Bay Ridge yesterday morning.

Joe was four years old (born March 19, 1905) during all the events listed below. He was already into bodybuilding at age 10 (see picture) and later became a Coney Island performer — “Strongest Man In the World” as he was billed — and a prizefighter with the name Kid Dundee.