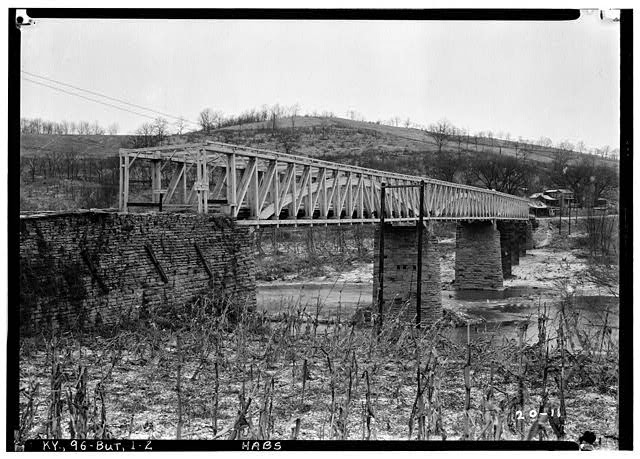 Above: A wooden bridge in Kentucky using the Burr truss, invented by Theodore Burr and first used over the Hudson River’s first bridge span. (Courtesy LOC)

People has schemed to put a bridge over the Hudson River for over two hundred years.  That task would prove most difficult to those in Manhattan, given the distance between its shores and those of New Jersey. After several failed proposals, the two were linked with the Pennsylvania Railroad tunnels (1910), the Holland Tunnel (1927), and finally, the George Washington Bridge (1931).

But further upstate, industrious New Yorkers had an easier time of bridging the two sides, as the river became narrower in places and engineers could work upon sparsely populated lands.  The first bridge over the Hudson River rose at the village of Waterford (near Albany) in 1804, the work of inventor Theodore Burr, the cousin of Vice President Aaron Burr.

From an 1820 map of the Hudson River. You can see where Burr’s bridge was located, situated over the Hudson until the 20th century (courtesy NYPL): 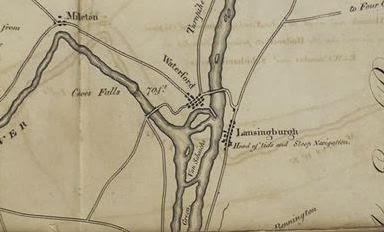 While Aaron was engaging in a vituperative war of words with Alexander Hamilton, his cousin Theodore was crafting an extraordinary bridge, described in a later history by his ancestor as “four combined arch and truss spans, one of 154 feet, one of 161 feet, one of 176 feet, and a fourth at 180 feet.”  By this point, he was already a well-known, even adventurous builder, but the Waterford bridge was truly something unique.  He eventually patented his design, which became known as ‘a Burr Truss,’ used in the construction of covered bridges throughout the United States.

A sketch of the Waterford bridge, as illustrated by Thomas Cooper in 1889, and an excellent view of what became known as the Burr Truss: 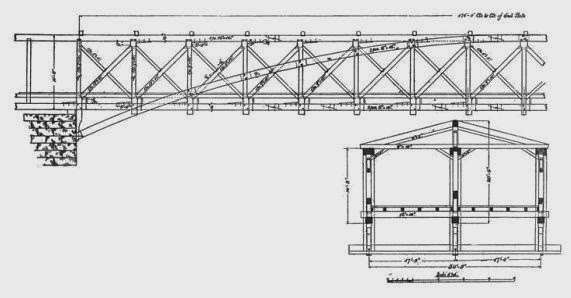 The bridge was coming along nicely by the spring of 1804.  The local paper noted that “the erection is proceeding rapidly, the abutments, (on shore sides) and one of three piers are already near finished, and the frames of the arches are in a state of equal preparedness.  Concerning the abutments and piers, there is not the least doubt that they will render the bridge secure from ice in spring seasons.”

I’m not sure where Burr was in July, whether at the bridge site or back at his grist mill in Oxford.  The bridge was over one-third completed that month when Theodore got word that his esteemed cousin had met Hamilton in a duel at Weehawken, 150 miles down river, leading to the death of Hamilton.

But while Aaron’s reputation would quickly deteriorate, Theodore’s would briefly flower, becoming America’s most prolific bridge engineer in the early 19th century.  His most impressive span, the Susquehanna River Bridge in Pennsylvania, survived until 1857.

Strangely, however, Theodore’s eventual fate would eventually mirror his cousin’s.  Many of his bridges fell apart, and his finances were ruefully mismanaged.  He actually disappears from the historical record; according to author Donald E. Wolf, “[h]is heirs report that he died in 1822, but they have been unable to say what caused his death or to identify the place of his burial.”

The Union Bridge, as the Waterford-to-Lansingburgh crossing is sometimes called, was called “the greatest wooden span of its time.”  Originally exposed to the elements, the bridge was later sheathed in a covering.  It held sturdy over the Hudson River until it was destroyed in a gas fire in 1909.

Hey! Waterford’s my hometown! I would like to also put a plug in for http://waterfordmuseum.com/ which has a scale model of the Union Bridge and a lot of documentation.