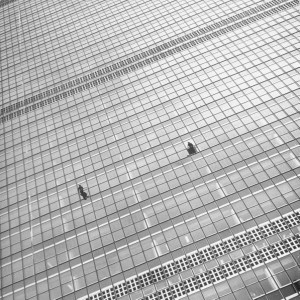 Fifty-eight years ago today, the headquarters for the United Nations officially move from their temporary offices in Lake Success to the brand new 39-story Secretariat Building in Manhattan facing the East River, just a few months after the building opened in January. The General Assembly that year would be held in Paris, as the permanent assembly hall would not be ready until the following year.

Above, in a photo taken a couple months earlier (March 1951, Andreas Feininger), window cleaners prepare the glittery glass-curtain for the new arrivals.

…and a half-century of unpaid parking fines was about to begin!