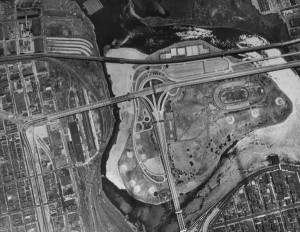 “You can draw any kind of pictures you like on a clean slate and indulge your every whim in the wilderness in laying out a New Delhi, Canberra and Brasilia, but when you operate in an overbuilt metropolis you have to hack your way with a meat ax.” — Robert Moses

Visit the original page for Robert Moses and the Modern City and click onto the city map to give you a visualisation of his influence. I think there might be like a quarter mile in southwestern Staten Island where he exerted no meaningful influence, but that’s about it.

Outside of Long Island and New York City, possibly his best known projects were at Niagara Falls. And yes, that was controversial too. “Moses’ success is the most striking, but far from the only, example of actions that stripped the [Western New York] region of any claim to the power and profits generated by Western New York’s greatest natural resource – Niagara Falls and the river that feeds it.” Read more at the Buffalo News.

Still can’t get enough writing about Robert Moses? Well, Arthur Nersesian has turned him into a fictional character. What side of the Moses controversy does Nersesian fall on? Well, judge for yourself from the title of his second Moses book, “The Sacrificial Circumcision of the Bronx.” [New York Times]

Have people been too revisionist in restoring Moses’ reputation? Nicholas Von Hoffman from the New York Observer seems to think so. “The attack on The Power Broker has nothing to do with the book, and everything to do with the need of some to change the cityâ€™s memory of this man, Moses.” SNAP! [courtesy the official website of Robert Caro]