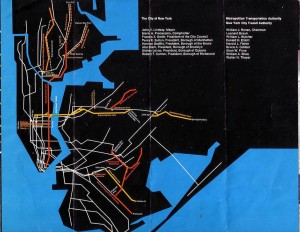 Best unlaid plans: (Above) The aborted additions to the New York City subway system, illustrated on the coolest subway map ever, from 1968. [Map from Second Avenue Sagas]

Hoofin’ it: Remembering Death Avenue, the west side cowboys, and the origins of the High Line. [Ephemeral New York]

Who Goes to Sardi’s?: Brooks of Sheffield does. [Lost City]

Begging for improvement: The current mess with the Long Island Railroad recalls a near-disastrous blaze at Chambers Street from a few years ago which underscored the desperate need for equipment upgrades. [Second Avenue Sagas]

Skyline shenanigans: Is the Empire State Building being threatened by a younger, slimmer upstart being proposed for a spot just a couple blocks west? [City Room]

1 reply on “History in the Making: Psychedelic Tunnels Edition”

It doesn’t look like everything was aborted. The 63rd Street Tunnel was indeed built, bringing subway service to Roosevelt Island and creating the “Superexpress” service from Queens Plaza to 71st Street-Continental.