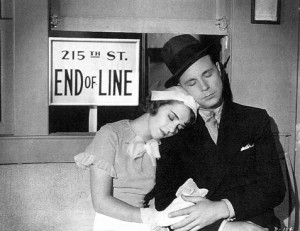 Above: ‘Dames’ on a Train: Keeler and Powell dream of the innocent days

The subway doesn’t immediately come to mind as a photogenic movie star, but in fact, the various tunnels and stations of the New York City Subway have appeared as the backdrop for hundreds of movies. Its route diversity — from deep under midtown to elevations above the outer boroughs — and its longevity have allowed filmmakers to turn the subway into a rolling sound stage. I recently binged on a variety of subway films from several eras and noticed a definite pattern in their development:

The First Subway Movie: I posted this just a couple weeks ago, but the subway makes its first appearance at the inception of the very first IRT line, with a six-minute short (they were all short back then) “New York Subway” filmed by the Edison company, which was simply a camera following behind the first subway from Union Square to Grand Central. The film’s cinematographer, Billy Bitzer, went on to innovate standard filming techniques, like the soft focus and the fade out, and made his reputation working with D.W. Griffith on The Birth Of A Nation and Intolerance.

The Musical Subway: Fiction films wouldn’t be shot on-locaton in the subway until the 1940s, but that didn’t stop Hollywood from transforming it (via a backlot) into a romantic set piece. The most unusual of these is certainly the 1934 hokey gangbuster Dames, featuring an exotic dance number by Busby Berkeley as psychedelic as any 60s counter-culture movie. Dick Powell and Ruby Keeler put on a wacky show — they’re always puttin’ on a show back then — featuring a crowded ride on an uptown train. Powell falls asleep and his dreams burst into hundreds of chorus girls. BONUS: Earlier in the film, the pair woo each other on the Staten Island ferry with the song “I Only Have Eyes For You” (making its debut).

ALSO: Although it’s an elevated train — not a subway — I’d be remiss if I didn’t mention that King Kong (1933) didn’t much enjoy them rumbling down Sixth Avenue either.

The Romantic Subway: ‘On The Town’ (1949) is a candy-colored, on-location race through New York nostalgia, with our three dancing sailors skimming through the city’s greatest landmarks. A subway ride provides the impetus for the central romance, as Gene Kelly falls for a poster of Miss Turnstiles (a play on the mid-century’s quaint beauty pageant contest Miss Subways). Daydreaming similar to ‘Dames’ produces an equally dance-filled response (watch it here).

The Dark Subway: I’m not sure why more film noirs weren’t set on the subway — that would be remedied in the 1970s — especially when they’re as juicy as the 1953 Pickup on South Street. The opening scene is one of its most famous, as an eerie Richard Widmark hovers over ditzy Jean Peters in a crowded subway car, gingerly relieving her purse of what proves to be a very troublesome item. From there, the action shifts to the piers of South Street — nearly unrecognizable, not a mall in sight — before submerging back into the subway tunnels for a spectacular finish. Here’s a clip of the opening scene:

ALSO: With intrigue rumbling below, even the breeze from a passing subway train could elicit a sexual response as a defenseless young woman in a white dress stands above a grating in the 1955 comedy The Seven Year Itch.

The Hostage Train: That glowing sheen of the Berkeley musicals — even the somewhat clean shadows of ’50s crime dramas — would slowly fade by the 1960s, along with the conditions of the subway itself. Presaging a rich future as a moving hellcar of violence and death, the 1967 film The Incident presents a group of unwitting passengers terrorized by two young, stereotypical ’60s sadists. Surreptitiously filmed and very low budget, ‘The Incident’ would introduce the subway car-as-trap motif that would fuel the 1974 thriller The Taking Of Pelham 1-2-3 and open its possibilities for urban horror.

Vengeance Underground: The movies hardly sugar-coated New York City’s hard times in the 1970s and rendered the subway into a place where anybody, at any time, could be shot, stabbed and assaulted. In Death Wish (1974), the subway is one of several locales of seething, bald-faced criminal activity, but it’s so dangerous that Charles Bronson goes down there twice to pick off bad guys. In the universe of this unsubtle action flick, you could be mugged and raped five, six, seven times a day, so best to be proactive and pick them off before they get you. Ten years later, Bernhard Goetz would reinvent this hyper, fictional fantasy by actually doing it. 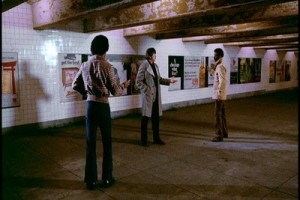 ALSO: The greatest movie ever made using the subway, The French Connection (1971), actually has its most notorious moment that runs underneath an elevated line in Brooklyn, a breathless chase scene filmed famously without the city’s permission. 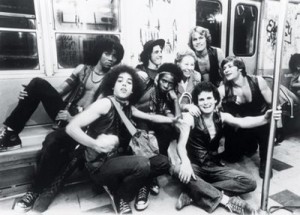 The Fantasy Detour: The reputation of the New York subway system was so poor in the 1970s that depictions went from the ultra-realistic to the absurd without missing a stop. In The Warriors (1979), the train becomes a virtual yellow-brick-row for a costumed Coney Island gang escaping a host of absurd villains. The Union Square subway station holds one of their deadliest challenges: suspendered, roller-skating pretty boy toughs with feathered hair. It’s only a tiny step into pure fantasy and an actual yellow brick road in The Wiz (1978) with a creepy collection of gangly puppets, a pair of Scarecrow-eating trash cans, and living subway posts most certainly not designed by Heins & Lafarge.

Local Lines: While the mainstream movie depictions would get even more outrageous, the growth of independent filmmaking and thoughtful, locally filmed productions in the 1980s depicted the subway in more realistic tones — as a confusing place to lose a child in Gloria (1980), as an underground wild west for graffiti artists and hip hop dancers in Wild Style (1983) and Beat Street (1984, in the clip below), and as a restless throwback to film noir in King of New York (1990).

The Sequel Subway: With the advent of the Hollywood blockbuster came a restoration of the subway’s reputation — sorta. The subway in the cinematic 1980s and 1990s was still dangerous, but in wild, sensational and very unrealistic ways. The tunnels underneath Manhattan harbored rivers of ectoplasmic ooze (Ghostbusters 2, 1989), a train booby-trapped with explosives (Die Hard With A Vengeance, 1995), a supernatural danger zone of runaway trains and alien warriors (Superman 2 AND Superman 4), and even the Teenage Mutant Ninja Turtles (who hole up in that abandoned City Hall subway station).

Midnight Horrors: As the subways became safer to ride, the usual tropes of knife-wielding thugs and rapists no longer made sense as objects of menace. Soon the subways were filled with supernatural beings, starting with the relatively sedate Jason from Friday The 13th Part 8: Jason Takes Manhattan and slowly elevating into humanoid insects (Mimic, 1997), monsters from the sea laying large lizard eggs (the Godzilla remake, 1998), and humanoid insect monsters from the sea (Cloverfield, 2008)

ALSO: For a more intriguing take on subway horror, I recommend Jacob’s Ladder (1990) which uses the Brooklyn Bergen Street Station to surreal effect.

The Worst Subway Depiction Ever: Of course, films are allowed to manipulate train lines, distort direction, even put trains next to landmarks that are, in reality, miles away. It’s fantasy. But somewhere out there in the vast universe of fiction there is a vague, undefined point where a film steps over the line, and the movie which does this most shamelessly is the otherwise great Spider-Man 2, which inserts a vast, fantasy elevated R line through the heart of Manhattan, rebuilding what the city so painstakingly tore down in the 1940s and 50s.

21st Century Redux: In the last forty years, Hollywood has had a nasty habit of replicating itself, and that goes for subway movies, with rehashed old themes like vigilantism (in 2007’s The Brave One) and even remakes the older films, like the sorry remake to The Taking of Pelham 1-2-3. Incidentally, that remake’s two stars have two important subway films on their resumes — John Travolta in one of the greatest New York films of all time, Saturday Night Fever, and Denzel Washington, in an uncredited, unceremonious moment in Death Wish.

I know I’ve missed a few goods/bad ones (Money Train, The Yards) but those’ll be for a future post…

3 replies on “A History of Subway Cinema: From musical daydreams to gritty roller-skating gangs and underground alien bugs”

Missed the best movie subway joke ever told, from Brother From Another Planet (1984):

Another really good subway role was in Great Expectations (1998). Although I don’t think the critics liked it, I thought it was an awesome interpretation of the novel. The chase scene in the subway station is great! The only pet peeve is that they are in Manhattan and they take the G train. Hmmm… Maybe I missed something.