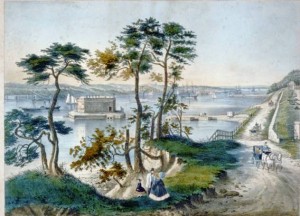 Sure, the Narrows looks all nice and calm, until an axe murderer comes along. (Pic courtesy Library of Congress)

The image above is an 1861 illustration — a Currier & Ives illustration, no less — of the lovely waters of the Narrows and, behind it, the bucolic loveliness of Staten Island, as seen from the shores of Brooklyn. Out of sight behind the viewer is Fort Hamilton, the coastal fortification completed in 1835 and still operated today as an army base. It gives its name to the surrounding neighborhood, often considered part of Bay Ridge. That floating fort you see in the water is the older Fort Lafayette, which was regrettably demolished in the 1960s to make way for the Verrazano Narrows Bridge.

See the lovely shore road to the right, offering abundant views of the harbor? And see that charming family, enjoying a lovely walk? Two years earlier, this area was sight of a vicious crime — a bloody axe murder.

Late in the evening of June 10th, 1859, with the Narrows lit only with lights from docked ships, two young men were stumbling down a road near Fort Hamilton — most likely the one illustrated — heavily sloshed from ‘intoxicating liquors’. (Are there any other kind?) Some kind of a disagreement took place between the two men — one James Quinlan and the very unfortunately named Patrick Kilboy.

In the heat of the moment, Quinlan picked up an axe and, in a drunken rage, he sent it into Kilboy’s skull. Patrick, bleeding and near death, managed to make it home to his wife, where he died.

These kinds of unfortunate crimes happened often in Brooklyn history and frequently along its busy shoreline. Fort Hamilton was a fully functioning military base but obviously drew its share of rowdies. Things would become increasing intense at the base in the following years with the Civil War; Hamilton and Fort Wadsworth in Staten Island would be recruited to protect the harbor from Confederate invasion during the war.

This brutal crime is briefly mentioned in the New York Times and the Brooklyn Daily Eagle, and the names of the perpetrator and victim have been totally forgotten. But two other men associated with the crime pop up several years later, in a more amusing crime caper.

The justice officiating the conviction of Kilboy’s murderer was one C.W. Church. In his murder investigation, he found one witness, named James Ferry, who must have been unwilling to testify, as it seems Ferry was forcibly brought in, then arrested.

Several summers later, on July 17, 1867, according to another Brooklyn Eagle article, the judge discovered that somebody had burgled his prized chess set. Whether it be some kind of revenge crime or mere serendipity, the thief was later captured and identified as James Ferry — either the same man Church had called in as witness to the Kilboy killing, or a startling coincidence.

The Eagle’s police blotter sums it all up: “Ferry is now under checkmate, awaiting examination.”