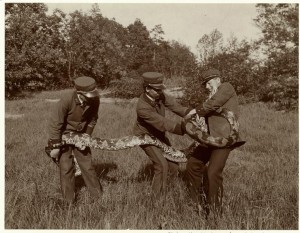 These 1906 Bronx zoo employees won’t let this snake out of sight. (NYPL)

Escapes from the Bronx Zoo are relatively rare today, so news of a 20-inch Egyptian cobra slithering away last Friday — its current whereabouts unknown — struck fear and excitement in the hearts of Bronx residents. The slithery beast has even inspired its own Twitter feed @BronxZoosCobra. (Its latest Tweet: “Taking the Sex And The City Tour!!! I’m totally a SSSamantha.”)

But the institution once known as the Bronx Zoological Park is a 111-year old zoo after all, and during the park’s early years, animals were escaping all the time, almost yearly in fact. And the creatures making the prison breaks back then were far larger than a mere snake. Here’s just a sampling, culled from some early New York Times articles:

July 1902 — A rather plucky Mexican panther broke loose from his new home behind the puma house and crashed a noontime picnic full of women and children. Soon the grounds were buzzing with panicked families and people fleeing for indoor safety. This made life easier for the animal, who feasted upon abandoned picnic lunches. The headlines claimed, “He Eats Sandwiches and Ham for Lunch, but Balks at Pie.” The panther eventually jumped into the Bronx River and swam away.

The original article [found here] makes mention of a bear that had escaped the previous summer. It is unclear whether this was the same “tiny black bear” granted to the zoo by Theodore Roosevelt in 1901 — actually a bear named Teddy Roosevelt, years before the animals that might have inspired the ‘teddy bear’.

July 1904 and 1905 — Both snow leopards in captivity at the Bronx Zoo escaped in successive years. The first was “shot dead after an all night hunt,” and the next year its mate tried to make a break for it, disappearing “like a ghost” until it was found the next morning. [source]

July 1908 — The iguana would have been quite an exotic beast to children one hundred years ago, so imagine the shock when two Cuban iguanas escaped from their confines during a crowded summer day in the reptile house. Women and children ran to the doors. “One man sprang over a low iron fence into the alligator cage in his excitement and scrambled out again as soon as he realized where he was.” They were thrown into burlap sacks and returned to their confines. [source]

August 1908 — Later that year, an 36-foot long East Indian python (perhaps the one pictured above) briefly fled while being transferred to a pit and had to be recaptured by police officers.

November 1916 — Most unusual is the tale of Loco, the ring-tailed cat, who escaped his cage but hung around the zoo for over two months, killing various birds and rats. Loco was a donation from a Texas animal owner, who gave the cat that particular name because he “must have eaten of the loco weed” before being captured. After feasting with abandon on the zoo’s bird collection, Loco was recaptured and returned to his cage, “mus[ing] upon the good time he has had.” [source]

For more information on the history of the Bronx Zoo, you can download our podcast on the subject right here (recorded in April 2010).

http://www.museumofhoaxes.com/hoax/archive/permalink/the_central_park_zoo_escape/ this might be a good addition to this entry