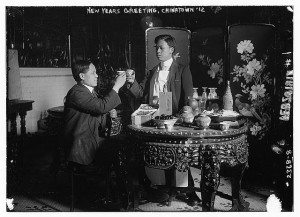 “On New Year’s Day they presented any celebration in Chinatown with fireworks. There have been murders sometimes when the whole joyful populace of the crooked streets of Doyers, Mott and Pell have been patriotically celebrating with gunpowder an historic anniversary.” — New York Times, 1/16/1912

The streets of Chinatown were relatively quiet in 1911, a delicate truce drawn between the neighborhood’s two rival gangs, the On Leong and the Hip Sing tongs. But few strolled down narrow Pell Street without fear that old rivalries might return. Fierce battles had erupted throughout the past decade, culminating in dozens of bloody altercations throughout 1909 and 1910. (We outlined some of the violence in our podcast last year on Manhattan’s Chinatown.) 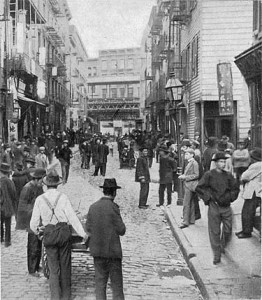 A committee of Chinese businessmen finally mediated a truce between the two tongs, but few suspected that hostilities would disappear. The control of On Leong Tong, who had once ruled the Chinese underworld for much of the 1890s, had been whittled away by the interloping Hip Sing Tong. Hip Sing’s leader, the flamboyant Mock Duck, often meandered down Pell conspicuously garbed in diamonds and a chain mail vest.

Although Hip Sing was subject to the truce, their allies — and the only other Chinatown tong of significant influence — the Four Brothers, were not. This imbalance of control, favoring Hip Sing and keeping Mock Duck in power, was bound to erupt.

And so it did one evening one hundred years ago, on January 5, 1912, at Mock Duck’s fan-tan parlor at 21 Pell Street, today the location of the First Chinese Baptist Church. Members of Hip Sing were gathered there, merrily gambling the night away under the glow of dangling light bulbs when three assassins from the On Leong Tong, armed with their trademark Smith & Wessons, burst in and began shooting.

Mock Duck himself may have been in the room that evening. He was certainly there, calmly sipping tea when police arrived. One of his gang members, Lung You, lay dead on the floor, while another, the ‘president’ of Hip Sing, Chung Pun Sing, was seriously wounded and fled to his home.

Witnesses led police to On Leong’s headquarters at 14 Mott Street. By the end of the day, over two dozen Chinese gangsters and bystanders had been arrested, including Mock Duck himself. He was charged with owning a gambling parlor, a fact that could not have been surprising to anybody at the Elizabeth Street police station. He was quickly released.