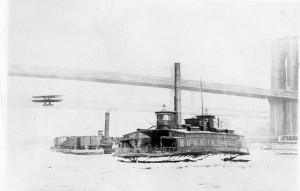 Frozen flight: Frank Coffyn sails underneath the Brooklyn Bridge and above the East River during the dead of winter.

This month we celebrate the 100th anniversary of a spectacular series of flights over the skies of New York City. These weren’t the first flights over the city — those had occured in the fall of 1909, during the Hudson-Fulton Celebration — or even the most daring or most publicized. (Aerial competitions like the Great Gimbels Air Race of 1911 might take those titles.)

These flights, which took place in February and March of 1912, were important not only due to the bravery and braggadocio of the pilot, derring-do Frank Coffyn, but because of his companion, American Press Association photographer Adrien C. Duff, who shot the first ever photographs and the first ever film of New York City from overhead. By doing so,  this also makes Duff the very first airplane passenger over New York Harbor.

Coffyn, a former Wright Brothers employee, accepted the offer of Brooklyn film studio American Vitagraph to figure out a way of snapping images of New York from above. This was a tricky task to be sure in 1912. Manned flights had only been invented by his former employers a few years previous. Planes had to be very light and until that moment could only carry the pilot and necessary equipment.

Below: Frank Coffyn, in a picture with a Wright Bros plane in 1911 (Photos courtesy Library of Congress) 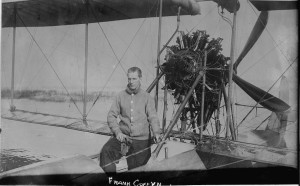 Even trickier, Coffyn wanted to lift off from the harbor directly and not from the icy landing strip based on Governors Island. To that effect, he furnished his plane with pontoons, allowing it to float upon the unfrozen shoreline.

His first successful flight skimming off, and then above, the Hudson River was on February 6, 1912, “proving that the aeroplane …is also a near cousin of the mudhen or the duck.” [source]  He continued to make successive flights over the next few weeks, this time from the shore of the Battery and up the East River. On February 13, 1912, he became the first pilot to fly underneath the Brooklyn Bridge, so low that he reportedly felt the smoke from a passing tugboat.

As a May 1912 edition of Metropolitan Magazine put it: “In February â€“ New Yorkers saw Frank T. Coffyn with his Wright hydro aero-plane travel over the surface of the half-frozen river, maneuvering in the water like a motor-boat, skating on the ice at top speed â€“ then rise in the air over the ferryboats, under and over the bridges and around the Statue of Liberty.”

But it was one particular flight on February 8th that is of historic significance. For he was joined on this flight this time by Duff, the ‘swashbuckler of the camera’. During the short flight, Coffyn took Duff from the Battery past Governors Island, over the ships of the harbor, around the Statue of Liberty, then back to Manhattan. (You can read a news report of the event here.)

Duff was actually strapped onto the lower wing, with his legs dangling off the side of the plane! Both Coffyn and Duff were frozen to the bone by the time they landed.

Duff took nine photographs in all, of which only a few were usable. Here the first of Duff’s pictures, and the first ever taken of New York from the sky. In this case, it’s of Castle Williams on Governor’s Island. (Photos courtesy the Frank Coffyn Collection.) 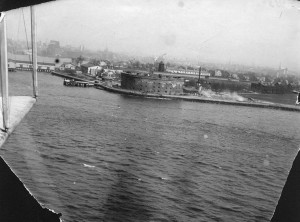 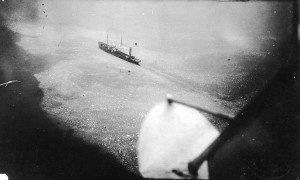 Coffyn eventually fulfilled his original mission with Vitagraph, bringing Duff back on his plane on February 12th to operate the moving-picture camera and making the very first film overhead New York. The footage is not the most vivid, partially because Duff’s hands became so cold that he could barely operate the crank-operated camera.

Later on, Coffyn attempted to operate the camera himself. This proved to be less successful, as a couple days later, he dropped the camera into the East River. Vitagraph released the usable footage to theaters in April. Here’s a newsreel incorporating some of Coffyn’s own footage and some great shots of him taking off from the Battery shore.

And whatever happened to Adrian C. Duff? He took that sense of adventure, enlisted in the U.S. Army, and became a noted photographer during World War I. Here’s one of his more famous images. He wrote of his exploits in a 1918 article for the Fulton Evening News. He survived the rigors of war only to die in a grim taxicab accident in Brooklyn in 1920.

1 reply on “New York City from the sky: The first aerial photographs”