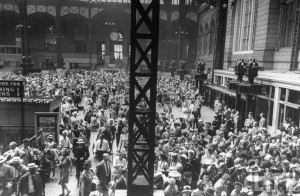 The crowds of Penn Station (with a sizable population of sailors!) making their way out of town via Penn Station for the July 4th holiday, 1944. I encourage you to click into the image and see if you can find your parents or grandparents! Courtesy LIFE Google Images.

Yesterday was the 50th anniversary of the attempts by a small group of architects and architecture lovers to rescue Pennsylvania Station, the grand old, deteriorating train station designed by McKim, Mead and White and opened in 1910.

Their small but important protest was not able to save Penn Station from the wrecking ball, but their concerted efforts to call attention to the destruction of treasured landmarks drew key media attention and widespread support. As a result, many other buildings were later saved, most notably Grand Central Terminal.

The New York Times ran a really lovely account of this well-dressed group representing the ‘impromptu’ group Agbany (Action Group for Better Architecture in New York). You can read it here.

And this is a good time to re-visit the history of old Penn Station and the building of the Pennsylvania Railroad tunnels! Check out our podcast on the history of Penn Station. You can download the show on iTunes, or directly from here.

My original blog post from 2009 that tied into the show has a large number of pictures of the original structure and even a few of the tunnels.

1 reply on “A good day to rediscover old Pennsylvania Station!”

Our throw away attitude has lead to the destruction of some of our most beautiful buildings in NYC.