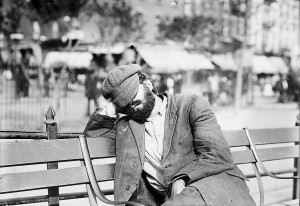 Was this photograph taken yesterday on the set of Steven Soderbergh’s new mini-series The Knick, or was it taken back in the 1910s?  The answer is at the bottom of this blog post!

This week, a little stage magic is manifesting in the Lower East Side. The Broome Street of 2013 has been turned briefly into the Broome Street of 1910!  Steven Soderbergh has been shooting his new mini-series The Knick in New York this week, a tale of old Knickerbocker Hospital set over a century ago.  This required the boutique-and-lounge strewn Broome be reverted to its days of immigrants, wagons and pushcarts.

Tom wandered through the set last night and took these photographs: 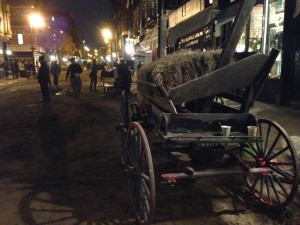 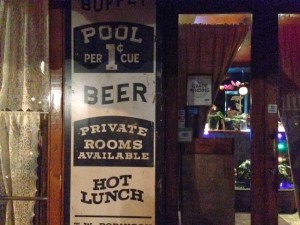 Hay, it’s one of the Bowery Boys! 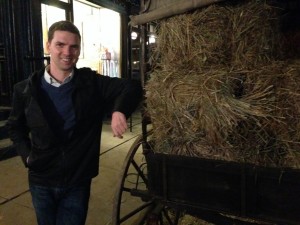 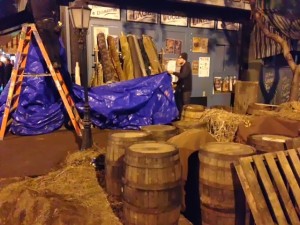 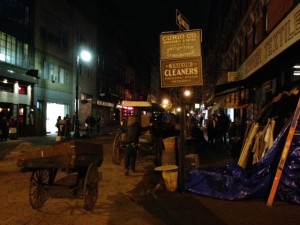 Interestingly,. there’s an actual Stag’s Head up on 51st Street! 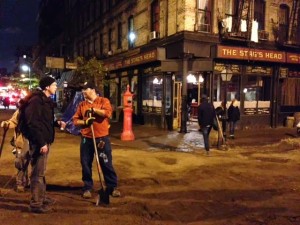 Gothamist also has a fine set of pictures from the set, featuring some extras in costumes.  The Soderbergh mini-series will debut on Cinemax in 2014.
Compare these with some actual pictures and illustrations of the Lower East Side in the early 1910s:
Mulberry Street clam seller (circa 1900-1905), cleaned-up image courtesy Shorpy. 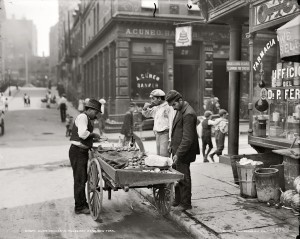 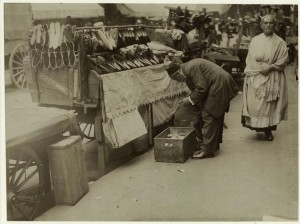 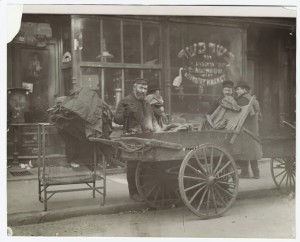 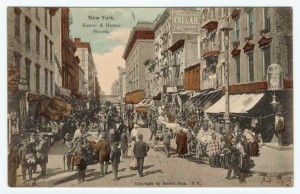 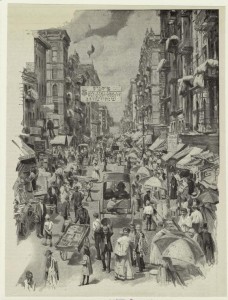 As for this photograph — this is not a picture of a hipster film extra from 2013, but a man taking a brief nap in a park in the Lower East Side, photo dated 1912. ( LOC)

Very cool! Check out this book coming out in March about Brooklyn’s waterfront Irish gangs too… http://artofneed.wordpress.com

I remember when they filmed Ragtime, in the late 1970s. The crew had fixed up a block of E. 12th St., as I recall, to look like ca. 1900. It was marvelous to see, only a few things had to be changed or covered up. And another time, early 1980s, entirely by accident, I stumbled onto a street in Williamsburg, just south of the bridge, that was being used to film Once Upon a Time in America. It was full of Hebrew signs and such — again, fascinating.

Just moved to Ludlow Street…hope to see them filming again.

Great post. What a current undertaking and what cool old images. I can’t imagine having a hot potato salesperson on the street. New York is a bottomless pit of surprises. Can you imagine turning a corner and finding a street full of dirt? It is also a place where it is easy to slip off a curb or realize you have a cold, like everywhere else in the world. However, if you are in or near New York, make sure to visit City MD to get fixed up quickly. They have several clinics sprinkled throughout the area making it possible to find a convenient location. They are staffed by great doctors, understand a New York minute and want to get you back to living your life. This is a smart and efficient option.