One of you may beÂ related to Pietro, the boy in the picture. He was one of thousands of Italian immigrants who arrived in New York in the 1870s-80s. Â He seems to have been intelligent and even exceptional, weathering a set ofÂ truly dreary circumstances that would have defeated most men.

PietroÂ was not yet 13 years old when he was almost killed inÂ a streetcar accident. He was permanently scarred and unable to support his family. Â If not for witnessing a shooting outside of his home, we might never know his name.

ButÂ inÂ 1892, Â PietroÂ became a profoundly moving subject in a new book by one of the greatest social reformers of the Gilded Age.

Jacob Riis was a pioneer social activist who used journalism and photography to change the living conditions of thousands of poor New Yorkers. Â He took his bulky camera to the most decrepit nooks of lower Manhattan, documenting a world entirely unseen by most people. Â  In 1890 he published How The Other Half Lives,Â exposing theÂ squalid living conditions of downtown Manhattan’s mostlyÂ immigrant population.

RiisÂ did help to change theÂ face of New Â York. Â In Five Points, the worst tenements were demolished and replaced with government buildings and one very manicured park. But hisÂ depictions of ethnic groups, in retrospect, could be very simplistic, even condescending. Â In his goals to highlight an overwhelmingly malignant condition, he often glossed over someÂ telling details of some of his subjects. 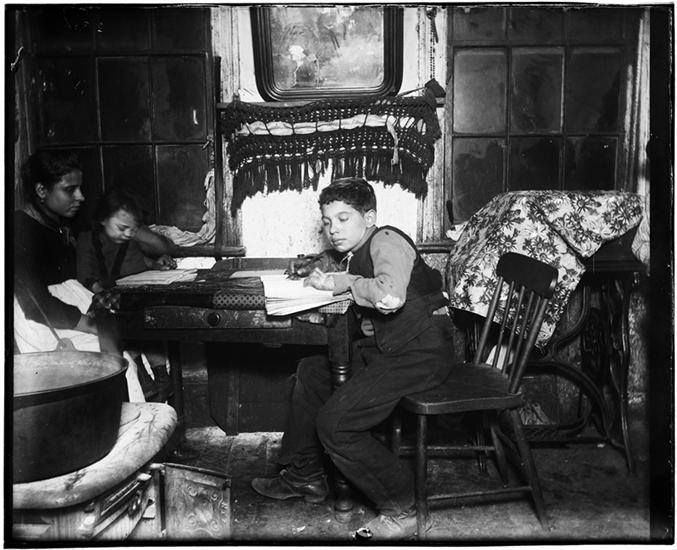 Pietro (I haven’t been able to find his last name)Â is one of Riis’ favorite subjects. Â He makesÂ his debut in The Children of the Poor, Riis’ 1892 follow-up to How The Other Half Lives, as a model ofÂ the striving young student. Â Pietro is an ambassador of sorts, an avatar of social improvement, bringing “[e]very lesson of cleanliness, of order, of English” taught to him in school back to hisÂ tenement life.

He was born sometime in the early 1878 or 1879, just as the sudden increase of southern Italians began to permanently change the nature of the old tenement neighborhoods. Â We know he was born in Italy — not “borned here” as Riis depicts him saying — Â and brought to a home somewhereÂ Â atÂ Mulberry and Jersey StreetÂ (in the shadow of the Puck Building.)

He lived in a single room with his parentsÂ and four younger siblings. Â As a small boy, Â he attended classes at the school run by Old St. Patrick’s until “his education was considered to have sufficiently advanced to warrant his graduating into the ranks of the family wage- earners.” Â Being the eldest son, he would have gone to work immediately. In this case, as a bootblack, the most common occupation for poor Italian immigrants in the 1880s.

Probably around age 11 or 12, Pietro began shining shoes in a saloon somewhere in the neighborhood. Â One day, while crossing Broadway, he was struck by a streetcar andÂ mangled so badly that it was assumed he would not survive. “They thought he was killed but he was only crippled for life.”

He met Riis one day at theÂ police station at 300 Mulberry Street. He was there as a witness to a shooting which had occurred in front of his home. Â As Riis describes:

“With his rags, his dirty bare feet, and his shock of tousled hair, he seemed to fit in so entirely there of all places, and took so naturally to the ways of the police-station, that he might have escaped my notice altogether but for his maimed hand and his oddly grave but eager face, which no smile ever crossed despite his thirteen years.” 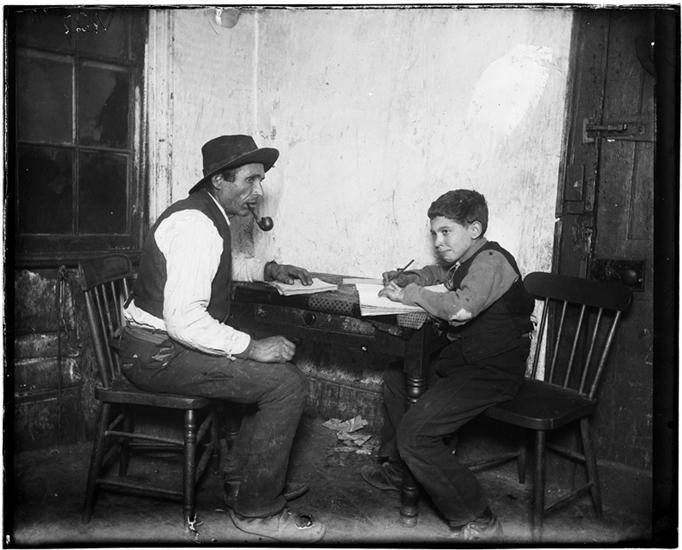 Riis gained the boy’s confidence and was invited into his home to document his life. Â  Pietro was devoting his energies to education, improving both his Italian and English skills. Â It appears the accident left one or both of his hands impaired. Â As Riis observes:

‘By ‘m by,’ said poor crippled Pietro to me, with a sober look, as he labored away on his writing lesson, holding down the paper with his maimed hand, ‘I learn t’ make an Englis’ letter; maybe my fadder he learn too.’

I had my doubts about the father. Â He sat watching Pietro with the pride in the achievement that was clearly proportionate to the struggle it cost, and mirrored in his own face every grimace and contortion the progress of education caused by the boy.

‘Si! si!’ he nodded eagerly. ‘Pietro he good a boy; make Englis’, Englis’!’ and he made a flourish with his clay-pipe, as if he too were making the English letter that was the subject of their common veneration.

Riis clearly views Pietro as a charity case burdened with the extraordinary responsibility of assimilating his family into American life. Â At the maimed 13 year old eldest child of immigrants, his days of innocence were long gone. Â His situation had utterly defeated him. At least, that’s the image Riis very poignantly meant to convey in his final anecdote,Â turning to Pietro as he watchedÂ over his baby brother:

‘Pietro’,” I said with a sudden yearning to know, ‘did you ever laugh?’

The boy glanced from the baby to me with a wistful look.

‘I did wonst’, he said quietly and went on his way. And I would gladly have forgotten that I ever asked the question; even as Pietro had forgotten his laugh.’

We never see Pietro again. Â He’s used as a pitiful example of life in the Italian slums and then fades into the background, lost among the thousands of individuals who lived in the Mulberry Street slums.

Riis, however, does use the generic name ‘Pietro’ — now a stand-in for all disadvantaged Italian immigrants — in his 1902 book The Battle With the Slum.Â ”

Did Pietro ever make it out of the tenements? Did he get married, have children, begin a career? Did his physical condition ever improve? It’s rather likely that either he or one of his siblings had children, and one of those children might be your grandmother or grandfather.

You can read Jacob Riis’Â Children of the Poor here.

Do you guys what edition of How The Other Half Lives is the best one to get?

I’d try one of the recent illustrated editions featuring Riis’ own photography. He sometimes references subjects he took photos of (such as in the Pietro story).

This is a great post! I hope someone finds out what happened to Pietro.

Riis met Pietro at the Mulberry St police station, “where the boy was ‘interpreting for the defense in a shooting case.'”