In the fall of 1783 Lewis Morris, signer of the Declaration of Independence, helpfully suggested in a letter to the Continental Congress that his own bucolic estate Morrisania (in today’s area of the South Bronx) would make a fine home forÂ the new capital of the United States. Â That didn’t happen, of course, but the Bronx plays a big role in another big national moment of pride – the dome of the U.S. Capitol Building.

In short, the dome was constructedÂ in the Bronx. At Westchester Avenue, between Brook Avenue and St. Ann’s Avenue, as a matter of fact. Ten short blocks from where Mr. Morris is buried today.

The Capitol Building in Washington D.C. was originally built inÂ 1800. After suffering a fire during the War of 1812, it was a thoroughly redesigned, with a low woodenÂ dome adorned with copper. By the 1840s the copper had oxidized, giving the dome a similar hue as the one worn by the Statue of Liberty today.

From an early 1846 daguerreotype by John Plumbe: 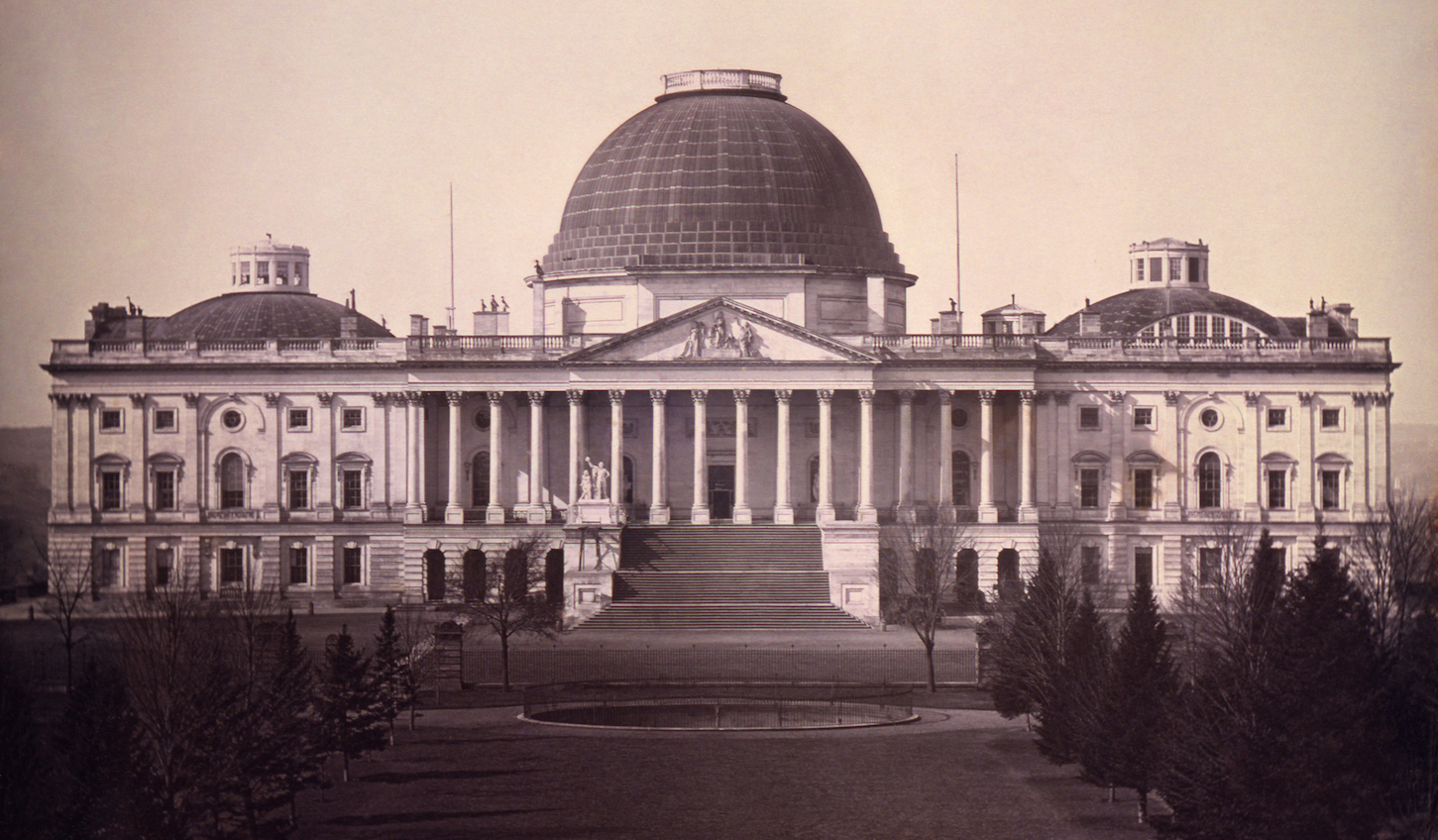 But with the inclusionÂ of new states into the Republic, the nation’s leaders were outgrowing this home. The addition of new wing extensions in the 1850s made the copper dome seem embarrassingly small. In a city of mighty and grandiose architecture — for a young country still very much unsure of itself — this simply would not do.

The story now turns to New York, home to some of the most profitableÂ iron foundries ofÂ the 1850s. Â It seems extraordinary today, but the city actually had several large iron works scattered throughout the region. Below: A 1865 depiction of one such iron foundry at 14th Street and the East River

A couple key foundries were built near the southern shore of Westchester County, near Spuyten Duyvil Creek, including Johnson Iron Works and J.L. Mott Iron Works. Â (Mott’s president Jordan Mott would develop nearby land into the small town — and later neighborhood — of Mott Haven.) They were kept in business by mass production for railroad lines and, a decade later, by manufacturing cannons and other weaponryÂ during the Civil War.

Another local iron works was Janes, BeebeÂ & Company which was originally housed in a factory at Reade and Centre Streets in Manhattan. Â By 1859 the boardroom will have changed a bit to become Janes, Fowler, Kirkland & Company. A little audacity on their part would win them a most treasured contract. 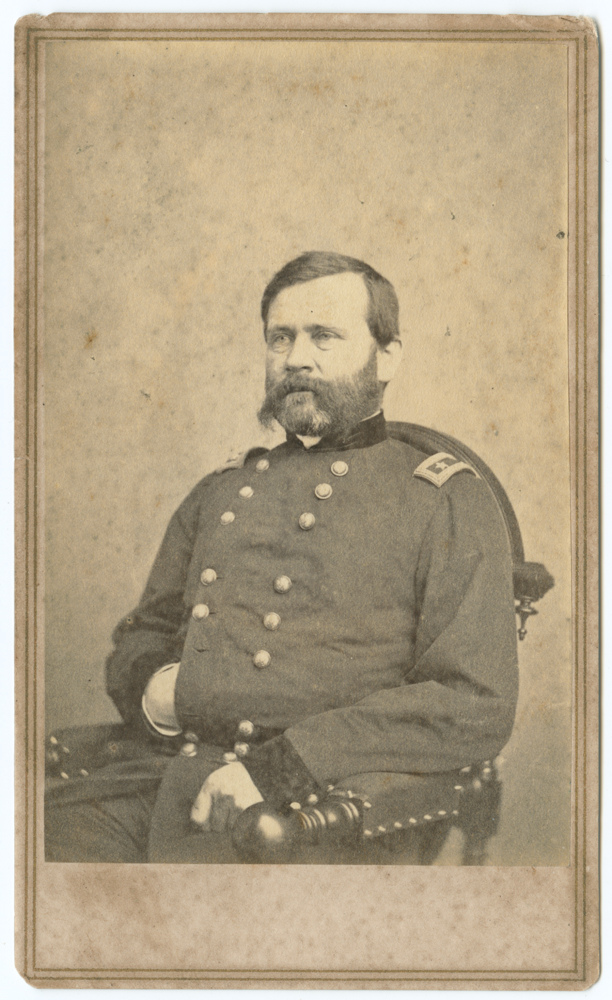 Colonel William Buel Franklin, a respected civil engineer and later to be a Union Army general (as pictured above), was tasked with developing the new dome and reached out to various iron foundries for bids. Originally, Janes, Fowler, Kirkland & Co. had only been asked about providing surface covering for the dome. Â Seeing a possibility for greater profit, they boldly offered to do the entire thing — for an unbelievable price:

“Having thus made an offer in accordance with your letter of the 1st instant, we beg leave to lay before you another proposition. We have examined the plans for the dome, and we find the design of what remains to be done above the work now being put up, is so dependent, the one part on the other, that it forms a whole that cannot well be divided…. [W]e therefore propose to execute all that remains to be done to the dome, including the putting up of the entire work, exclusive only of staging and hoisting, as before expressed, for seven cents per pound (7c)” Â — source

That’s a little under $2 per pound in today’s money. What’s astonishing is that they were mostly known for small ornamental iron furniture and decor, not exactly recommending themselves for such a massive project.

From an 1866 advertisement in the New York Tribune Almanac:

But the company’s bold ‘all in’ proposition got them the job, although both they and Franklin were later accused by members of Congress of colluding on a higher price — that the dome could have actually been completed for mere six cents a pound. (Although such price gouging was a regular feature of government contractors, this appears in retrospect to be your usual Congressional grousing.)

Janes, Fowler, Kirkland & Co. were awarded the contract in February of 1860, the same month that a young lawyer from Illinois named Abraham Lincoln spoke to a packed Cooper Union, a mile north of Janes’ original foundry.

Fortunately by this time, however, the foundry had decided it needed a much larger space for ambitious projects such asÂ the Capitol dome. In 1857, anticipating great things, theyÂ moved from Manhattan to a foundry in the town of Morrisania in Westchester County. The iron works was “1,000 feet long by 50 feet wide, giving employment to a large number of hands, many of whom have been with the firm for years.”

The new Morrisania foundry of Janes, Kirtland and Company, in 1862

From here, parts were forged, partially assembledÂ and loaded onto ships in the East River where theyÂ then made their way down to the District of Columbia. The foundry became a critical job creator for the town. “The wages paid to the workmen amount to many thousand dollars yearly, and with the taxes paid is of great importance to the town of Morrisania.” [source]

The Civil War halted construction on a great many projects across the country, but not at the Capitol Building. In the spring of 1861, theÂ firm was told to stop working on the dome. But contractors at Janes realized that so much work had been done — and so much ironwork already delivered — that they continued unabated, taking the government in good faith that they would pay their bills after the war.

“There was not a day during the Civil War when the sound of the hammer was not heard at the Capitol,” wroteÂ George Cochrane HazletonÂ in 1914.Â “Even when, in May 1861, Â all work was ordered to be suspended, the contractors practically continued at their own expense to put in place the 1,300,000 pounds of iron castings then upon the ground.” 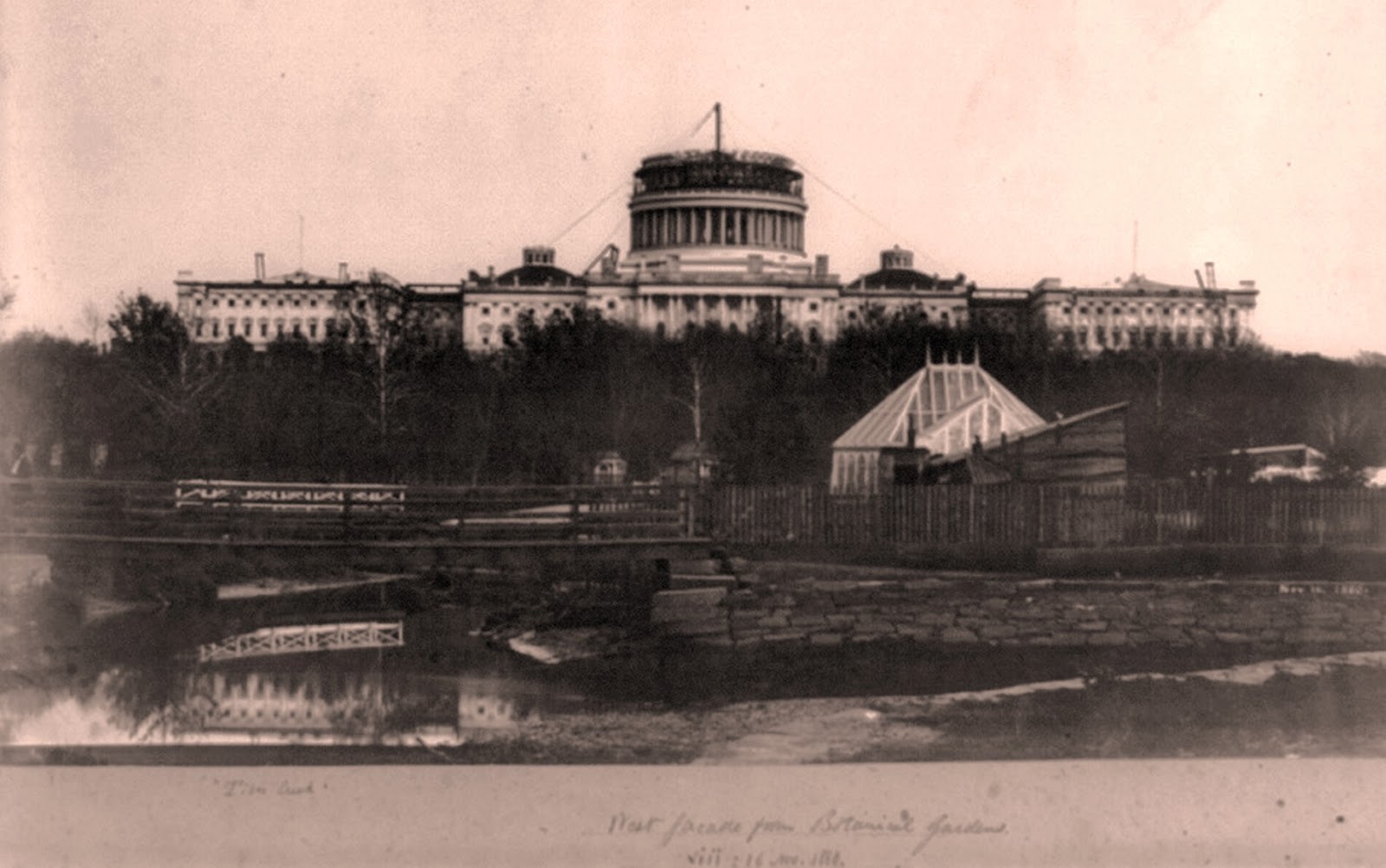 They completed work on the dome –Â in all, usingÂ 8,909,200 pounds of cast iron — in October of 1865, six months after the end of the Civil War and the assassination of President Abraham Lincoln.

Adrian Janes,Â founder of the foundry, died on March 2, 1869, but he had seen his company produceÂ marvelous thingsÂ by this time. His Bronx foundry also produced the Bow Bridge in Central Park in 1862 and would later manufacture the railings used on the Brooklyn Bridge.

While the foundry is long gone of course, one vestige of Janes’ legacy remains — St. Mary’s Park. The land was purchased from the Morris family by Janes in the 1850s for the purpose of developing a foundry and other properties, including his home. Â For a time the area was even known as Janes Hill, and an area to the park’s northern side still takes that name.

A small chapelÂ was once on the property — St. Mary’s Church — for which the park gets its name. The Mary in question is actually Adrian Janes’ youngest daughter Mary. If that seems a bit hard to believe, keep in mind that St. Ann’s Episcopal Church just a couple blocks southÂ — where Gouverneur Morris and Lewis Morris are presently interred — is actually named for Gouverneur’s wife Ann!

From the January 5, 1859 New York Herald — Mr. Janes was also a speculator in guano (bat and seabird droppings) as evidenced by the newspaper notice below: 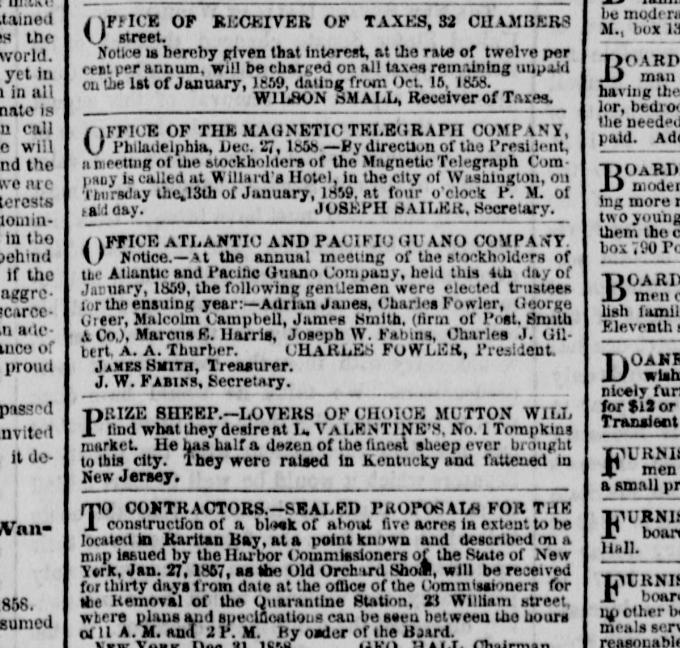 Hello,
I’ve recently become a big fan of your work and I’m really enjoying the Bronx series. Do you know of any resources to learn more about the Johnson Iron Works? My 2x great grandfather worked as an iron molder from 1866 to around 1900, when he retired and died in 1906. He lived in Spuyten Duyvil and his oldest son, my great grandfather moved to Elton Ave in Morrisania to raise his family.
I’m sure you get bombarded by requests like these, but appreciate any direction you can point me.
Thanks,
Dan in Chicago