DeWitt Clinton Park, far west in Hell’s Kitchen between West 52nd and West 54th Streets, has two unusual features that harken to a time one hundred years ago — and millions of years ago!

The park’s most striking feature is an unusual rock formation that juts out just west of the sports field. This unique outcrop, dating back 450 million years (that’s right: read that again!), is called exotic terrane, meaning that a portion of the earth’s crust formed by two tectonic plates grafted together to create a rock composition unlike anything that surrounds it.

Horsing Around: Children daily play around one of the oldest exposed areas of Manhattan’s natural topography. At top, in the 1934 image, the same rocks (more exposed and treacherous) greeted other children.

Over the past couple of centuries, most of Manhattan’s unique geological features have been smoothed over by the city, which hired workers to push plows and drive dump trucks filled with dirt. Thankfully, this extraordinary feature was left in place during construction

But on the eastern end of the park sits a more somber reminder of the past –New York’s most touching World War I memorial, a lonely doughboy with a rifle slung over his shoulder holding, wait, what is that?

He’s offering up a handful of poppies, flowers that held a decidedly different meaning during the statue’s dedication in 1930 than they have today. 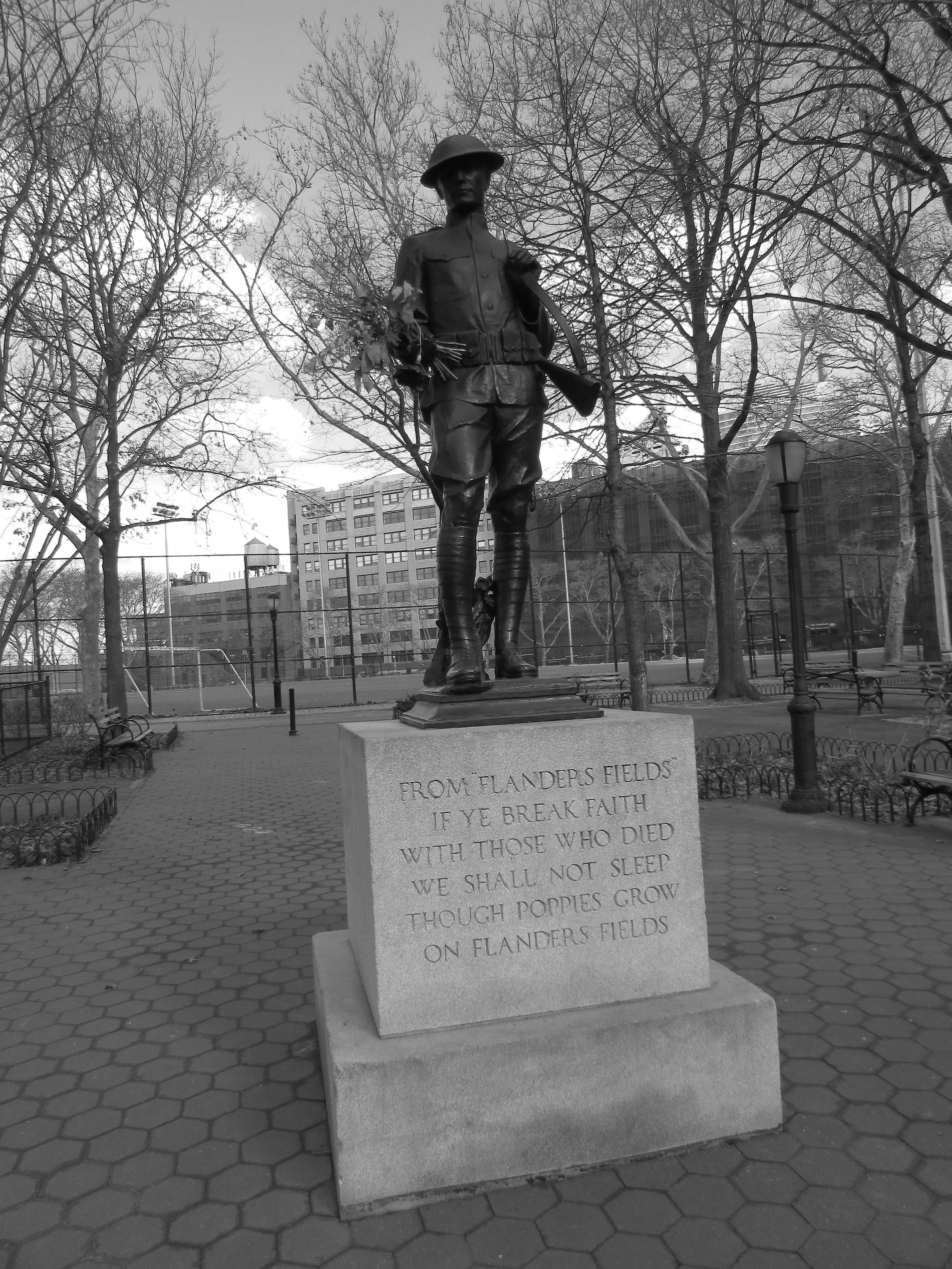 Poppies grew in abundance in the Flemish town of Ypres, site of multiple battles during the war, and the bright-red variety came to symbolize the fallen.

A quote from the famed World War I poem “In Flanders Fields” by poet- surgeon-Lieutenant Colonel John McCrae hugs the base, explaining the mysterious imagery:

In Flanders fields the poppies blow
Between the crosses, row on row,
That mark our place; and in the sky
The larks, still bravely singing, fly
Scarce heard amid the guns below.

We are the Dead. Short days ago
We lived, felt dawn, saw sunset glow,
Loved and were loved, and now we lie
In Flanders fields.

Take up our quarrel with the foe:
To you from failing hands we throw
The torch; be yours to hold it high.
If ye break faith with us who die
We shall not sleep, though poppies grow
In Flanders fields.

(The bolded part above appears as an inscription on the memorial.)

But this sorrowful monument of Hell’s Kitchen has another tragic element. It was crafted by sculptor Burt Johnson, known for creating many statues of World War I doughboys (a nickname for American soldiers) across the country. You can find another example of his work in Doughboy Plaza in Woodside, Queens.

But Johnson died in 1927 while still modeling the memorial intended for the park. His widow made arrangements for the statue to be completed and eventually, in the fall of 1929, it was installed at De Witt Clinton Park.

As a Canadian, I’m proud to see this poem on the statue. Nearly every student in Canada, and most Canadians, can recite all or part of this poem from memory. McCrea himself has his own tragic story. Here is a link to his story on a Canadian government website. http://www.veterans.gc.ca/eng/remembrance/history/first-world-war/mccrae

When I was in 7th grade, way back in 1964 or so, I had to memorize “In Flanders Fields” with the rest of my class. I can still recite it from memory. (I grew up in Queens, NYC).

I’m an original west sider and I can remember my Dad takeing me to DeWitt Clinton park and him telling me that Diasours walk on those rocks. That was when the west side docks were busy in the 1950’s. Than You for sharing the story about the “Rocks”.