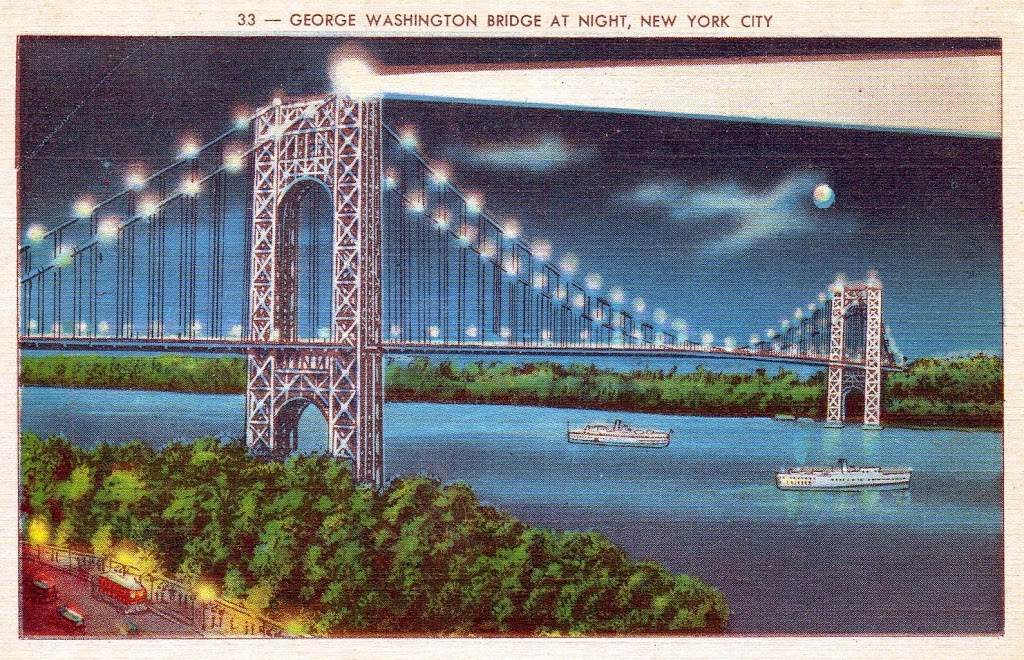 PODCAST  The George Washington Bridge is best known for being surprisingly graceful, darting between Washington Heights and the Palisades, a vital connection in the interstate highway system.  It’s also been part of more than a few political scandals. And we’re not even counting the current scandal involving New Jersey governor Chris Christie.

Figuring out a way to cross over the Hudson River (not using a boat or ferry) between New York City and New Jersey has been a challenge that engineers and builders have tried to solve for over two hundred years.  With the formation of the Port Authority in 1921, there was finally an administrative body with the ability to bring a Hudson River bridge to life.

At the core of this story is a professional disagreement (or betrayal, depending on how you see it) between Gustav Lindenthal, the dreamer of a monumental crossing linking New Jersey with Midtown Manhattan, and his protegee Othmar Ammann who envisioned a simpler crossing in a less populated part of town.

The final bridge was eventually built thanks to a few strategic political moves by New Jersey’s Jazz Age governor George S. Silzer. But the original bridge design was quite ornamental, a bridge close in appearance (if twice the size) to the Brooklyn Bridge. The bridge you see today is technically unfinished.

ALSO: The story of the little red lighthouse and the great big flag!

And we would like to again thank our sponsor Squarespace!

A view of the landscape around the George Washington Bridge, clearly illustrating the two different sets of conditions on both sides of the bridge.  The New York side abuts an existing neighborhood, while the New Jersey side retains a bit more of its natural beauty.  July 4, 1947 (Courtesy New York State Archives)

Gustav Lindenthal worked with Othmar Ammann on the construction of the Hell Gate Bridge, completed in 1917….

…but his ultimate dream of building a colossal Hudson River bridge, with a entrance point on the Manhattan side in Midtown, was never realized.  His vision of a dramatically large span was illustrated in the New York Tribune in 1921:

Othmar Ammann, whose bridge design eventually won out, due to its relative economy (compared to Gustav’s design) and choice of location:

The cable crew of the George Washington Bridge. The daunting construction job was completed ahead of time. (Courtesy Flickr/dsearls whose father appears in this picture!)

Opening day on the bridge, 1931, with 5,000 people in the stands and thousands more gathered around the New York and New Jersey sides.  New York governor Franklin D. Roosevelt was there, as with Lindenthal and Ammann.  Who was not there? The mayor of New York City Jimmy Walker, who was attending an NYU football game. (Flickr/wavz13)

Inside the bridge: a selection of photos from the Library of Congress from atop the tower, inside the anchorages, way extremely overhead and incredibly close:

From a cigarette card, showing the New Jersey toll booths:

The Little Red Lighthouse and the Great Grey Bridge….(Flickr/CPWview)

Footage from the bridge’s opening day featuring FDR in a top hat: