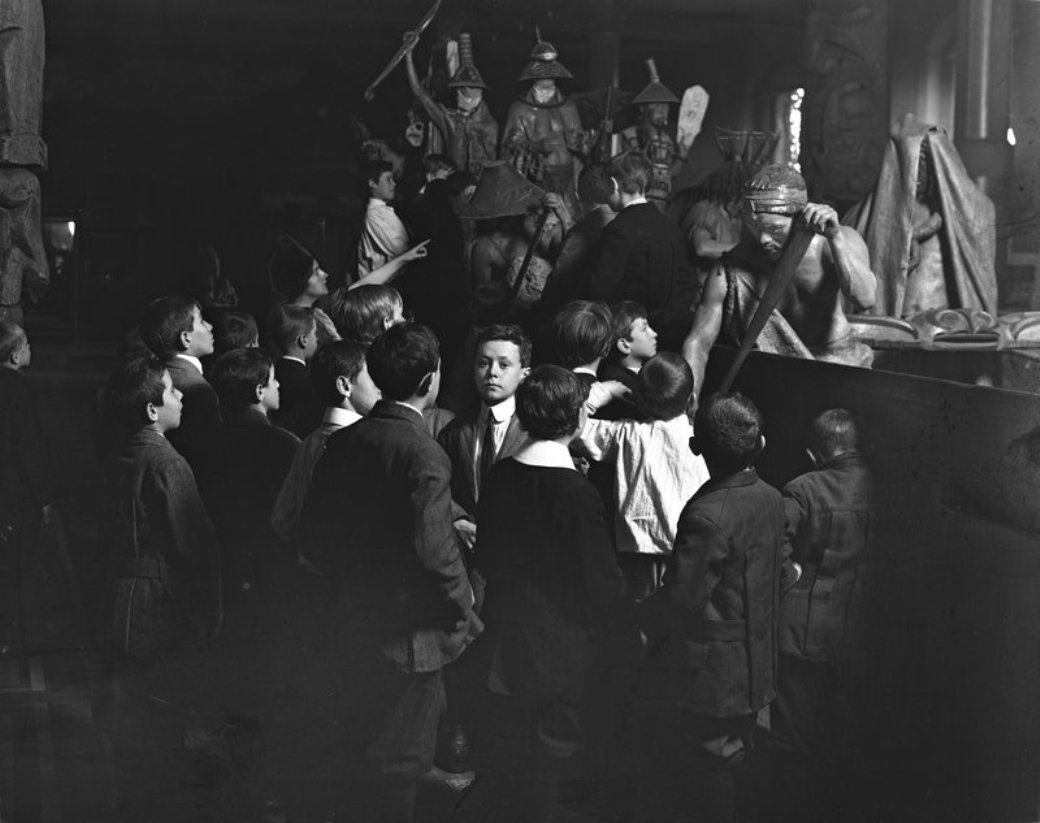 One hundred years ago, the American Museum of Natural History received a massive visitor, one so mighty that the doors of the museum’s delivery room “had to be removed and [the] partition openings enlarged” in order to accommodate it.

Was it a dinosaur? A meteorite? Perhaps the remains of a great whale?

No, the new visitor was a bush chrysanthemum,  with over 1,500 blooms, 17 feet in diameter, wider, the New York Times notes, than the largest meteorite on the property.

The massive plant, grown north of the city at Ardsley-on-Hudson, was the star of an impressive plant and flower show at the museum with thousands of chrysanthemums and a so-called ‘rose gorgeous’ which “changes color as it opens.”

While looking for a picture of this notable flower, I stumbled into something equally as magical — the American Museum of Natural History digital library of images.  While I never found the flower, I did find some stunning and lovely images of visitors and students enjoying the museum in its early days.

What is it about old museum pictures that I find so interesting? Most of the exhibits would today be considered politically incorrect, and modern advances have improved our knowledge about many of the objects being pictures. But the faces filled with wonder and imagination could be taken from museum images today.

So enjoy these pictures and visit the archives to view more:

Students and teacher at a mammal display, October 1911

Schoolgirls from Public School 94 drawing items on display in Southwest Indian Hall, May 1916

Blind children studying the hippopotamus, May 1914

More students in Dinosaur Hall, this time in December 1929

How to do parks the right way! A boy views a display showing Children’s Attitude Toward Public Parks at the Children’s Fair, December 1931

Students on guided tour of the Natural History of Man, December 1937

Kids have loved sharks for decades. Here’s a picture from the Sea Rovers display, Hall of Fishes, 1948

I never did find that historic chrysanthemum but the exhibition would have looked like this one from the Fall Exhibition of the Horticultural Society of New York, November 17-20, 1908.