St. Mark’s Place may be named for a saint but it’s been a street full of sinners for much of its history.

One of the most fascinating streets in the city, St. Mark’s traces its story back to Peter Stuyvesant, meets up with the wife of Alexander Hamilton in the 1830s, experiences the incredible influx of German and Polish immigrants in the late 19th century, then veers into the heart of counter-culture — from the political activism of Abbie Hoffman to the glamorously psychedelic parties of Andy Warhol.

And that’s when the party really gets started! St. Mark’s is known for music, fashion, rebellion and pandemonium. In the 1970s and 80s, clothing stores like Limbo and club nights like Club 57 helped define its character — punk, new wave, alternative, raucous.

Stuyvesant Street superimposed over the planned grid. Ultimately the street was allowed to remain, breaking the grid. By the way, see that green patch at the far right? That was also a cemetery.

The front of 22 St. Mark’s Place from a 1914 history book. (It looks almost identical to 20 St. Mark’s, the old Daniel LeRoy House, which is still there.). “It had a tea room in the rear of the first floor, which [the tenant] altered into a library, constructing a bathroom in connection with it. A new bedroom was added above the library, and in the basement was installed a cook.” [source] 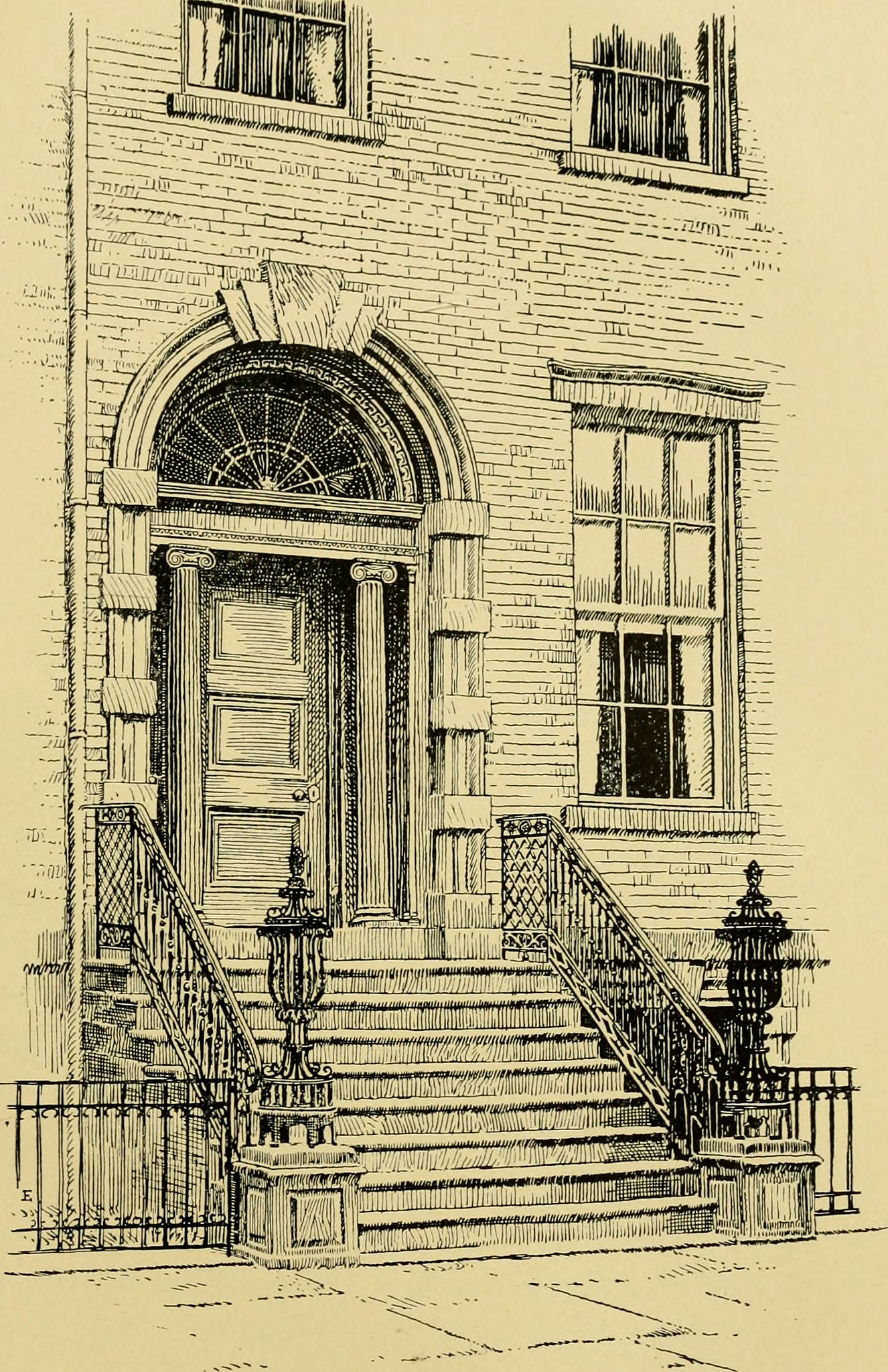 The mugshot of Dopey Benny whose gang was involved in the shootout which killed a city official. 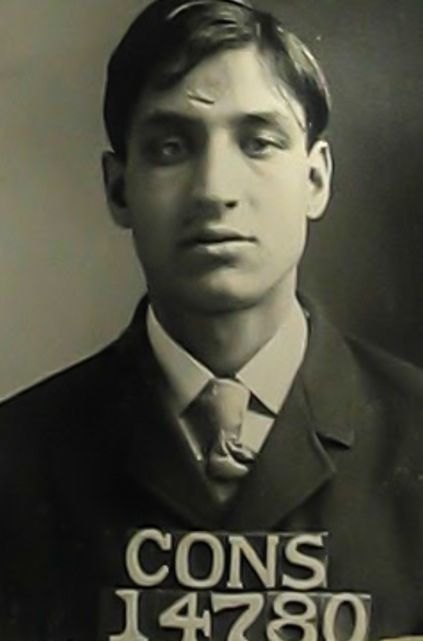 A photo by Victor George Macarol of the boutique Manic Panic (and a man in meditation), 1975 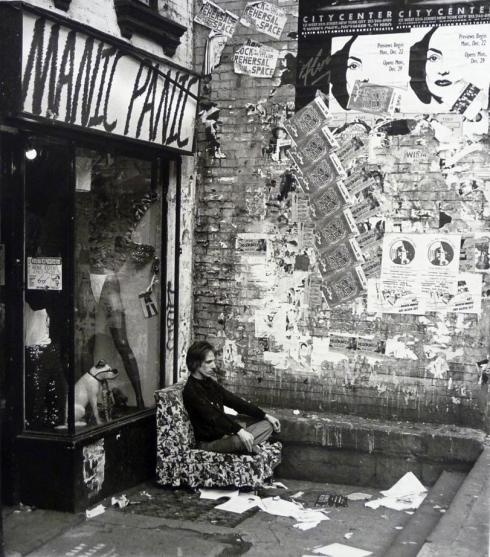 Crowds waiting to get into the Electric Circus

A flyer for Trash and Vaudeville… 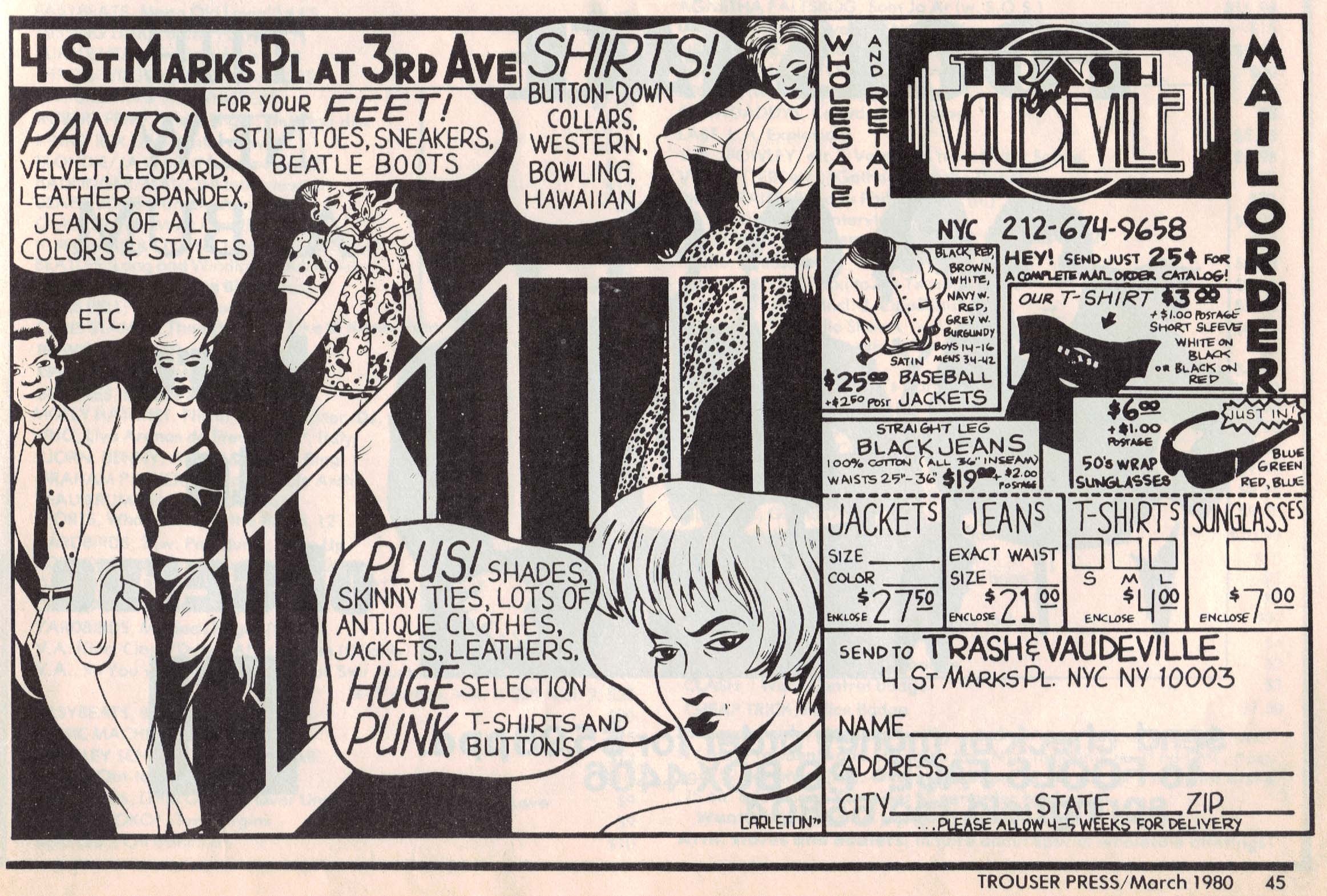 Keith Haring performing at Club 57 in a themed evening called Acts of Live Art. For more information on Club 57, you can read my earlier article about this extraordinary club here. Dazed has a pretty great article about the place here.

I very much enjoyed your podcast on St. Mark’s Place. It took my back to my time as a college student in the late 1970’s. I frequented the shops and befriended the owners and clerks, such Tish and Snooky of Manic Panic, Natasha of Natasha, Binky Phillips of St. Mark’s Sounds and many more. I even bought many books in the bookshop on the north side of the street. , too,I have wonderful memories of Club 57,where I attended parties, performances, art installations and, of course, the Monster Movie Club.

My memories, however, go back even further on the block between 2nd and 1st Avenues. In the 1960’s, my parents took me to see “You’re a Good Man Charlie Brown,” at Theater 80 St. Mark’s Place, and bought me a string of love beads at a hippie boutique. Going back even further, my grandparents were married in 1924, at a hall called The Mansion, located at, of all places, 57 St. Mark’s Place.

Thank you for exploring such a small but culturally (and personally) important part of New York.

I remember getting my hair cut at Hair Power when I was in H.S., right next door to Paul McGregor’s. That was an experience in itself. I also remember seeing Wendy-O and the Plasmatics on St. Marks when I was 18. Read about the show in the Voice but couldn’t get any of my buddies to go…so I went by myself. Freaky deaky!

Thank you for this podcast and thanks to the person suggesting it, too. Note: Towards the end of the podcast you mention Stingy Lulu’s. Here’s a link of filming locations from Whoopi Goldberg’s 1996 movie, “The Associate.” On this page are many images from the film, some archival pictures, including a great black and white of the diner’s store-front. In a pivotal plot point, Goldberg’s Laurel Ayres takes Diane Wiest’s Sally Dugan to Stingy Lulu’s where Laurel overhears secret corporate information shared to another by Austin Pendleton’s character Aesop Franklin. Itâ€™s a goofy cross gender film that is always fun.
http://onthesetofnewyork.com/theassociate.html

What’s the intro music on this episode at 2:45 or thereabouts?

I worked at hairpower at 27 st marks place in the 70s. Carlo manfredi was the owner. Jeep who later opened industrial hair on 2nd Ave taught me how to cut hair. They would use me in their ads that were in the soho news and village voice.

Just to get this in, I want to make sure that the “popular” view of St. Marks in the 60s isn’t completely bleached. There were black, latino and asian people living there as well, though you seldom see them in pictures. Ascribe that to the old “whites only for publication” sentiment, I guess. But there were and are black, latino and asian hippies AND former residents of The East Village. I personally crashed at 22 St. Marks and also lived on 3rd, 4th and 11th Streets in the era. NO whitewashing history, please?