St. Mark’s Church-in-the-Bowery is the oldest standing structure in the East Village. Â Upon seeing it, you’re almost forced to reevaluate where you are. Â It’s intriguing even to those who pass by it everyday. It’s mysterious even to those who work and worship here.

Built in 1799 by the Stuyvesant family, St. Mark’s chapel and cemetery conformed to a street grid plan unique to their farmland.Â Today the only street that exists from the old Stuyvesant plan is Stuyvesant Street,Â running diagonally through New York’s standard street grid.

The Stuyvesants planned the street on a true east-west access. Â It’s the rest of the island that’s askew with the compass.

Buried under the church ground are vaults of some of New York’s greatest civic leaders and socialÂ notables. Daniel D Tompkins, Vice President under James Monroe, is here, although the park that bears his name Tompkins Square Park is a couple avenues over. The department store king A.T. Stewart used to be here before his remains were stolen in a bizarre ransom attempt.

Philip Hone, the so-called ‘party mayor’Â of New York,Â is interred in a vault here. From my profile of the mayor a few years ago: Â “Mostly, heâ€™s remembered as a cultural ambassador, even commissioning artwork for City Hall, approving of a developing theater district in the not-yet-seedy Bowery and encouraging the cityâ€™s growth as an American capitol of arts and sciences.”

But of course the most famous individual beneath St. Mark’s is that of the original Stuyvesant — Petrus Stuyvesant, the director-general of New Amsterdam whose farms comprised much of today’s East Village and give the Bowery (Bouwerij) its name.

Stuyvesant died in 1672 in the British controlled colony of New York. Â From an 1893 history on Stuyvesant: “His remains were interred in a vault beneath the chapel which he had built near his house.Â  When the present St. Markâ€™s Church was erected, on the site of the old chapel, the vault was preserved, and a commemorative stone was placed upon its wall.”

Today hisÂ vault marker can be easily seen along the side of the church, and a bust of Petrus sternly greets visitors into the church yard.

The bust by Dutch sculptor Toon Dupuis is 100 years old, placed at St. Mark’s on December 6, 1915. Speaking at the ceremony, oddly enough, was General Leonard Wood, chief of staff of the U.S. Army. “Peter Stuyvesant was a headstrong, positive character with intolerance of lack of interest in the welfare of his company or colony.”

So headstrong that he’s still around perhaps? Legends of the ghost of Peter Stuyvesant have been associated with St. Mark’s since the 19th century.

One version of his ghost storyÂ recounted in the 1966 children’s book The Ghost of Peg-Leg Peter by M.A. Jagendorf, with illustrations by Lino S. Lipinsky (reprinted here):

“His body had been put into a closed vault. Â But that did not stop the ghost of the governor from stomping around on black or moonlit nights in his old haunts; his farm and the city hall where he had once reigned. Â Folks heard his stomping peg leg with the silver band, and saw him — and ran away in fear. Â That pleased him, particularly if they were English. Â He wanted no one around his grave, least of all the enemy who had robbed him and the Dutch Government.” 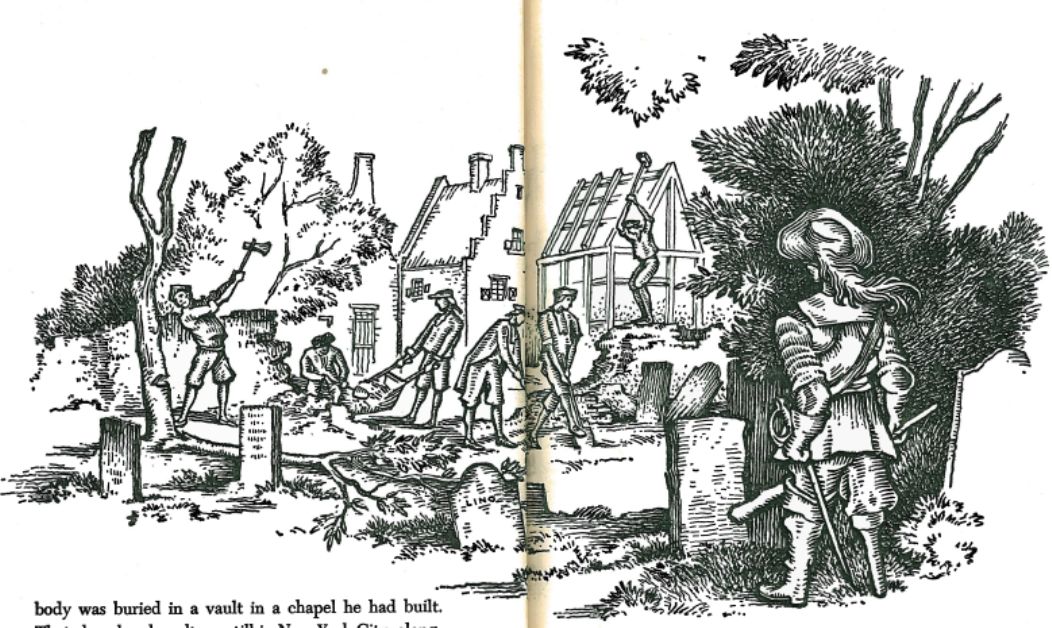 The growth of New York up Manhattan island so that it soon included all of Stuyvesant’s farm apparently enraged his spirit to such an extent that his apparition was reported in locations surrounding the church.

One fateful night Â a sexton entered the church late at night to fetch something for the rector.

“The moon was only half full, but bright enough to show church, trees … and ghost.

When the ghost saw the sexton, he raised his stick threateningly. The sexton raised his eye, took one look and ran off. 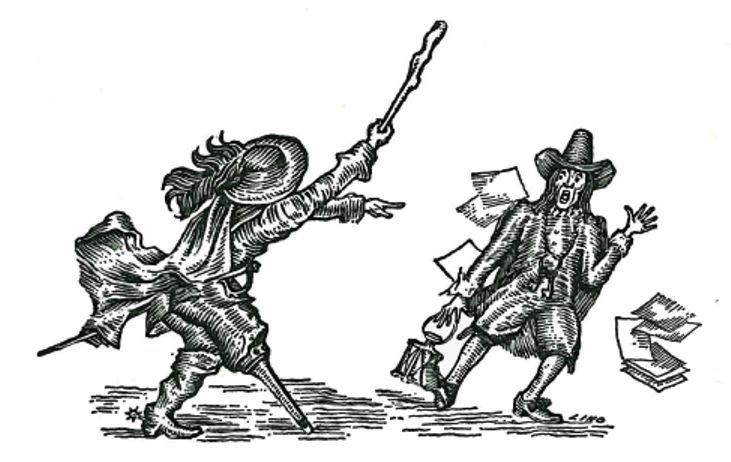 “The governor-ghost looked after the fleeing fellow with contempt and then stomped to the locked church door. He walked through it into the church and stomped up to the hanging bell rope. Taking it in his hands he began pulling it savagely. ”

Ringing a church bell two hundred years ago meant an emergency — a fire in the region, perhaps, or a major announcement.Â According to legend, when neighbors ran to the church to inspect the sound, they found nobody inside. The bell rope had been torn off and its lower section was completely gone.

Over the years stories of his ghost crop up, usually tied with tales of a rapidly changing city. Â One can only imagine how he’s taken to theÂ  gentrification of the East Village!

“Sometimes the ghost of the governor still comes out again and looks around sadly. But he never rings the bell any more, for he knows it will be of little use.”

Another disturbing event occurred at the church in 1903 although the resolution to this mystery was a bit more mundane.

One day the old clock atop St Mark’s began to act very mysteriously.Â “Churchgoers and others noticed last Sunday that the clock was acting in a manner befitting neither its age nor its position as hour marker over the historic graveyard. Not only was its course unreliable, but its actions were positively skittish, the minute hand having been seen to wiggle in a most undignified manner.” [source]

After several days of peculiar operation, a repairman climbed to the tower to fix the clock, only to find the culprit — â€œa kite string and pigeon were found to be responsible for the charges of horological misconduct lodged against the ancientÂ timepiece.â€

Below: Stuyvesant Street in 1856, an aberration to the city grid plan thanks in part to the presence of St. Markâ€™s Church and its well-established churchyard 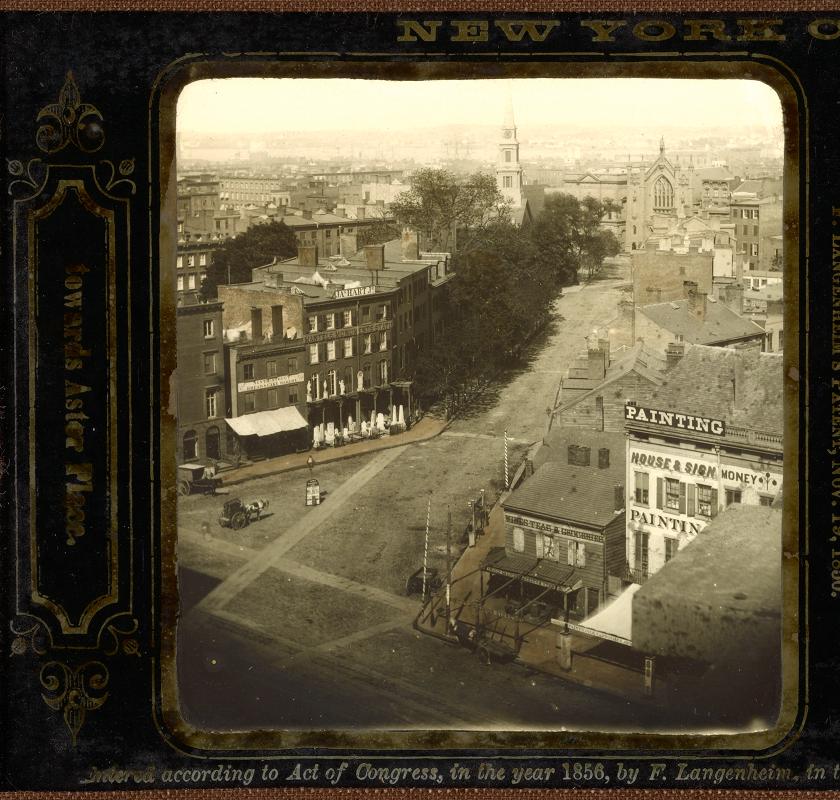 For more information on St. Mark In-The-Bowery, check out our podcast on its amazing history. Â And the ghost of Peter Stuyvesant pops up in our very FIRST ghost stories podcast.

Thanks so much! Have a terrific Halloween!

My nyc-loving grandmother was born on December 7, 1915, so it was a lovely coincidence to find out about the statue of Peter. I’m a big fan of all the work you guys do and have been learning so much from the podcasts! Looking forward to many more!