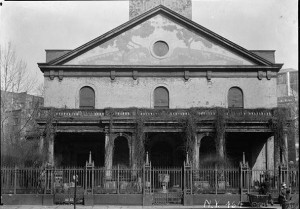 FOR YOUR CONSIDERATION Until May 21st, you can vote every day in the Partners In Preservation initiative, which will award grant money to certain New York cultural and historical sites among 40 nominees. Having trouble deciding which site to support? I’ll be featuring on a few select sites here on the blog, providing you with a window into their history and hopefully giving you many reasons to visit these places, long after this competition is done. Read about other candidates here.

PODCAST The church of St. Mark’s-in-the-Bowery is one of Manhattan’s most interesting and mysterious links to early New York history. This East Village church was built in 1799 atop the location of the original chapel of Peter Stuyvesant, New Amsterdam’s peg-legged director-general. His descendants — with the help of Alexander Hamilton and the architect of New York City Hall — built this new chapel with the intention of serving the local farming community of Bowery Village.

But in many ways, the more thrilling tales occur among the honeycomb of burial vaults underneath the church, the final resting place of vice presidents, mayors, and even Peter himself.

St. Mark’s reflected the changes that swept through Greenwich Village during the 20th century, with experimental and sometimes scandalous church activities, from hypnotism, modern dance and even a trippy foray into psychedelic Christian rock.

ALSO: Find out why you can never EVER go down into the vault of Peter Stuyvesant. And why is the church IN the Bowery, not ON the Bowery?

NOTE ABOUT THE NAME: The modern name of this historic structure is technically St. Mark’s Church In-The-Bowery. However most 18th-19th century sources drop the ‘church’ from the middle of the name. The hearty bust of Peter Stuyvesant in the courtyard calls it ‘Saint-Mark’s-in-the-Bowerie’.

Hyphens are liberally or reservedly applied based on the source. As we decided to spend a great deal of time talking about the old farm and the early years, we settled on ‘St. Mark’s in-the-Bowery’. But I even twisted myself around during recording and said ‘on-the-Bowery’ accidentally at least twice, so sorry for the confusion!

I’ll post some more notes on the show next week, some thank-yous, further information and some further sources to check out for more information.

Below: The residents of New Amsterdam beseech Peter Stuyvesant to surrender to the coming British forces in 1664. He is clearly not pleased. The official surrender actually took place at Stuyvesant’s farm house, two miles outside of town along the bouweij or Bowery road. Listen here for the real pronunciation of bouwerij. 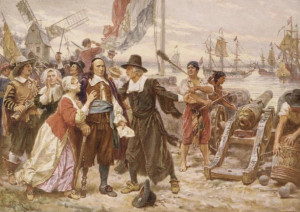 The caption reads ‘The Residence of N.W. Stuyvesant’ which formerly stood in 8th Street, between 1st and 2nd Avenue‘, one property on the land estate of the Stuyvesants during the 18th century. (NYPL) I’ve seen this same illustration differently labeled, dated 1800 and called simply ‘the Bowery House’. 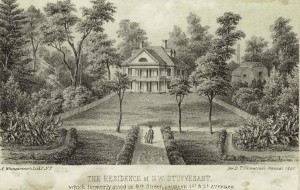 St. Marks in 1865, rendered in an early stereoptic photograph. The church itself looks pretty much as it does today. But the surrounding churchyard would be radically transformed. (NYPL) 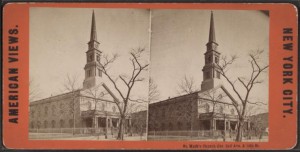 A real estate map, imprinted with the grid plan over the Stuyvesant property. You can see Stuyvesant Street at the bottom. The collected properties were also known as ‘Petersfield’ after a manor home of one of the Stuyvesant descendants. (NYPL) 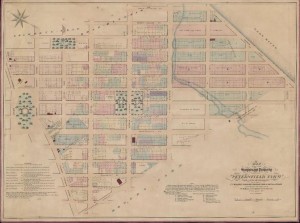 The interpretive dancers of Dr William Norman Guthrie,  the Scottish clergyman who oversaw many radical changes to the standard St. Mark’s services. 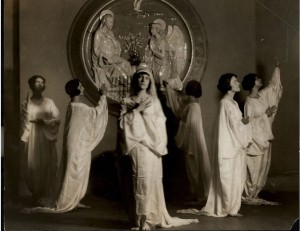 An excerpt from the Mind Garage’s ‘Electric Liturgy‘, which was performed at St. Mark’s Church in 1969

1 reply on “The secrets of St. Mark’s Church in-the-Bowery, and uncovering the East Village footprint of Peter Stuyvesant”